Champions League: Barceloneta Clinches Win From a 7 on 6 At The End 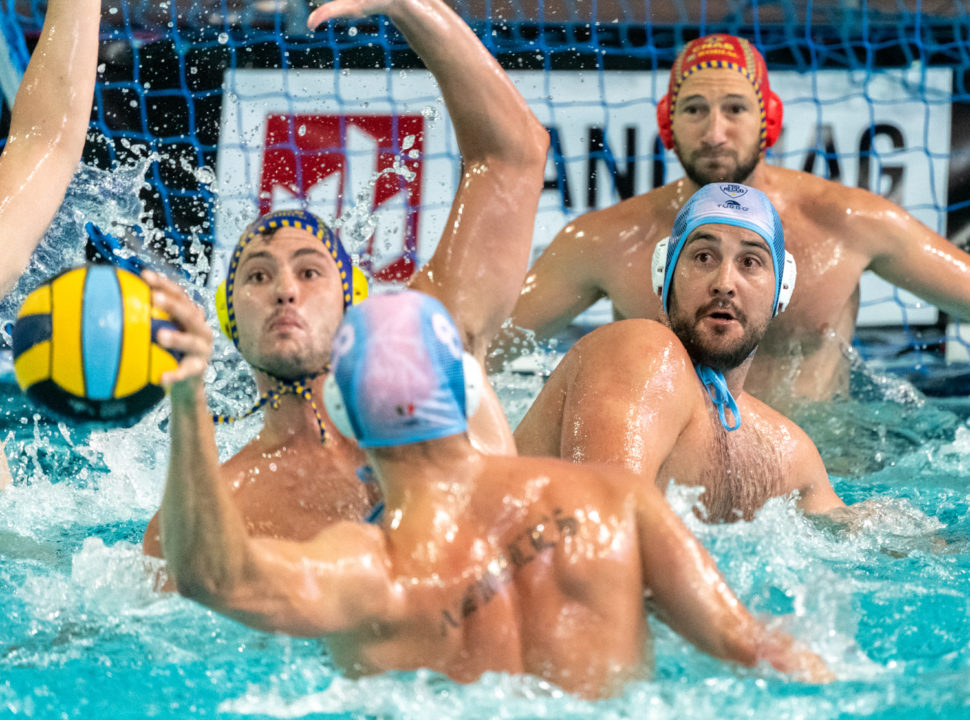 Barceloneta had to dig deep to turn the match in Herceg Novi but after sending its goalie to attack in the last possession managed to score the winner late. Archive photo via G.Scala/Deepbluemedia/Insidefoto

Barceloneta had to dig deep to turn the match in Herceg Novi but after sending its goalie to attack in the last possession it managed to score the winner with 0:02sec to go. Szolnok edged out Jadran Split in a nailbiter, Olympiacos downed Spandau with a 5-0 run while Jug floored Sintez by a 7-0 opening period so the four top seeds all bagged three points.

In Herceg Novi the hosts offered a stunning opening period as they took a 4-1 lead against top favourite Barceloneta. The Spaniards arrived to the match in the second period and showed some quality as they staged a five-goal surge (the last three came in a span of 86 seconds) and seemed to have found their rhythm. However, their lead didn’t last long, this time Jadran Carine hit back with a triple in 81 seconds for 8-6. These three-goals runs became an essential part as next came Barceloneta and soon it was in the lead again at 8-9 but Marko Petkovic could equalise with just three seconds before the last break.

The final period couldn’t have been any more exciting. The visitors went ahead twice, the Montenegrins levelled the score each time, then, at 11-11 they had a man-up after a time-out with 1:26 minutes remaining. They missed it and Felipe Perrone earned a penalty from the ensuing counter. Alvaro Granados buried it with 0:37 to go but Vladan Spaic netted a magnificent back-handed shot from the centre just 15 seconds from time. Barceloneta called for a time-out, set up a 7 on 6 with its goalie on the 2m line and the home side couldn’t adjust its defence and Felipe Perrone had a clear shot which he didn’t miss two seconds before the end.

On the contrary, in Szolnok the defences worked pretty well and the goalkeepers were also outstanding. Jadran’s offence was visibly weaker with the absence of four key players, they needed 10:42 minutes to score their first goal and after three periods they stood with only two. Though the home players missed a series of attempts but still held a 5-2 lead before the last quarter. Few would foresee that they would not score in the last 10:04 minutes and Zvonimir Butic added two in 70 seconds to shave the gap to one at 5-4. Mate Anic stopped a penalty to cap his magnificent performance (16 saves, 76.2%), though Viktor Nagy also delivered on the other end (75.0%) so Szolnok could keep these three crucial points at home. Jadran’s problems in front were mirrored by the fact that Butic was the only one who scored for them – four hits, two from penalties – and only three other players took shots at all while the team was 2 for 13 in man-ups though Szolnok’s 0 for 9 didn’t deserve too much praise either.

The other two favourites didn’t go through any similar excitements. Spandau could stay close to Olympiacos for one and a half quarters, then, after 5-5 the Greeks scored three connecting goals in 1:41 minutes, added two more in the middle of the third to go 10-5 up and maintained this gap till the end.

Jug played a perfect opening period against Sintez, the Russians seemed to be lost completely as they conceded one goal after the other from the counters and the Croats took a decisive 7-0 lead after just eight minutes. Their rivals could score their first at 9-0 – deep into the second period the number of shots on goal demonstrated the difference: it was 15-6 to Jug. The remaining time saw a bit more balanced game as the last three periods produced an 11-10 partial score.