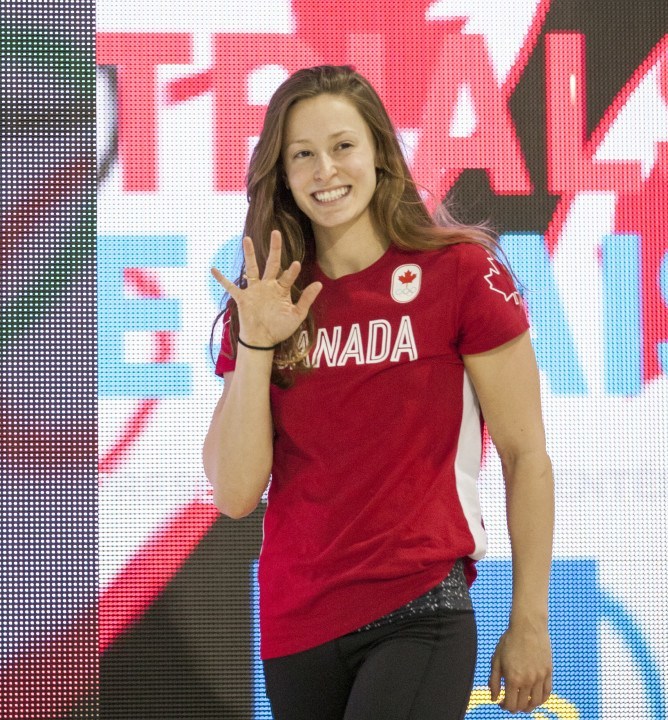 Canadian Olympian Katerine Savard is making a name for herself outside the pool as she made her on-screen acting debut in the film, 'Nadia, Butterfly.' Archive photo via Chris Tanouye/www.christanouye.com

Canadian Olympian Katerine Savard is making a name for herself outside the pool as the 27-year-old made her on-screen acting debut in the film, ‘Nadia, Butterfly.’

Officially named as a Cannes 2020 selection, the film ‘examines the difficult translation an athlete can have after retirement as they search for a new identity.’

“Nadia, Butterfly’ was directed by Pascal Plante, a former swimmer himself. Of the project’s premise, Plante told Lethbridge News, “Just the cycle of an athlete, especially in an individual sport…..It’s not as binary as a lot of sports movies that are based around either teams or boxing where it’s extremely clear: it’s you win or you lose.

“That makes for a very understandable stake. So I tried to complexify things up a bit.”

Plante sought out Olympians from whom he could retrieve first-hand knowledge for the project, which is how he was connected to Savard. The fly and free specialist read the screenplay and wound up auditioning for and landing the leading role.

Although Savard is not retired, she did take a 5-month break from her sport in 2018. Reflecting on her hiatus decision, Savard says now, “I was feeling like I did everything in my sport. So I didn’t really know why I was swimming anymore. I think I was just swimming because I was a swimmer. I found that really hard mentally. So the break was really helpful.” (Lethbridge News)

Savard is now back to training and feeling rejuvenated to make a run at the postponed Tokyo Olympic Games.

“I just started to set goals again and have dreams again,” she said. “So I started training hard and a year later, I’m here now. Before the pandemic, I was back where I was before I stopped. So I was really happy about that.”

Scenes were filmed in and around Montreal and Toronto with the project having been completed in February of this year. Cannes Film Festival was originally set for May but was canceled due to the COVID-19 pandemic. ‘Nadia, Butterfly’ is scheduled to be released in Canadian theatres this fall.