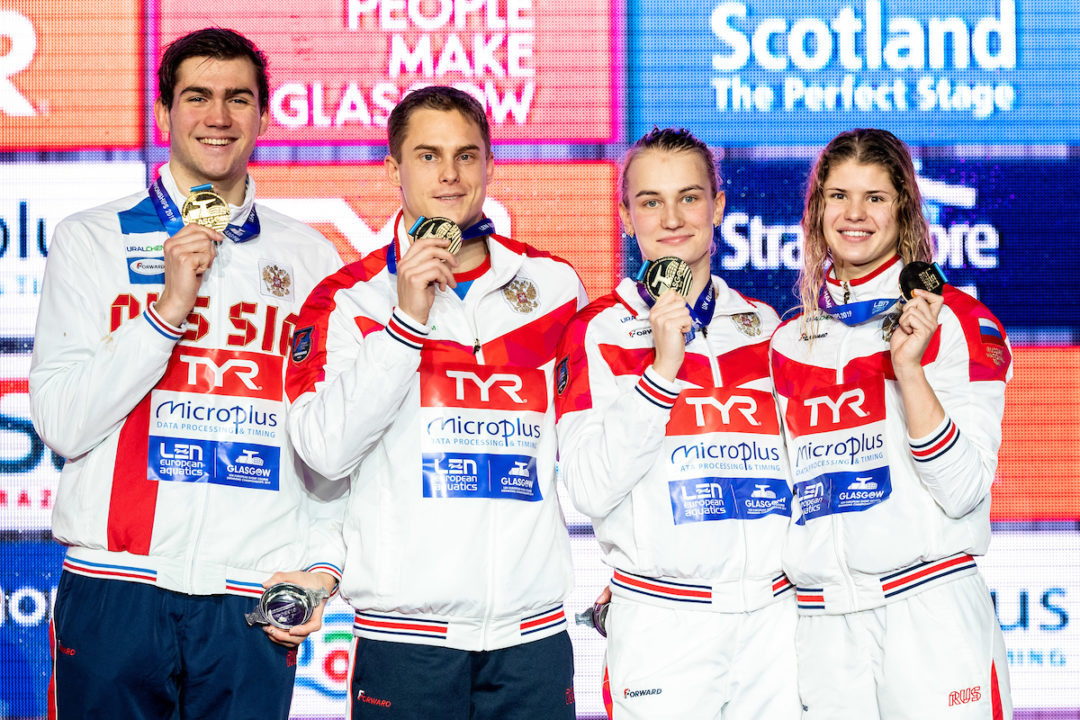 The team took down the USA's former record at the European SC Championships last December, the only one the fall at that competition Archive photo via Giorgio Scala

The team clocked a time of 1:36.22 on day two of the European Short Course Championships in Glasgow, taking down the previous mark of 1:36.40 set by the United States at the 2018 FINA World Championships in Hangzhou, China.

Multiple World Junior record holder Kliment Kolesnikov took his team out with a 22.67 split in the first 50m backstroke, which was at the time his best, though later in the meet he would swim 22.64 in the individual event.

An eye-watering 25.40 from Morozov on the breaststroke leg was the quickest in the field, which featured Ilya Shymanovich and Arno Kamminga who were closest in 25.44 and 25.54, respectively. That served as a reminder that Morozov, for all of his sprint freestyle accolades, is incredibly versatile.

The only sub-25 woman in the field was Surkova, who delivered a stellar 24.94 on the butterfly leg. The Netherlands, who came in second with 1:37.12, went for the female-male-male-female approach which gained back ground for them on the fly leg.

Last September, we reported that Shoma Sato has set a new WJR in the 200m breaststroke at the 2019 Student Swimming Championships in Japan.

His time of 2:09.21 was just under the record mark of 2:09.39 set by China’s Qin Haiyang in 2018. However, the time has not yet been ratified by FINA and the mark of 2:09.39 is still officially recognized as the record. In truth, Qin’s best time while age-eligible in the 200 breaststroke was a 2:07.35 done in 2017, which FINA has also still not ratified, so at a minimum the right swimmer has the official FINA record, if not the right swim. The 200 breaststroke is becoming a bit notorious for not having ratified records; even if we eliminate Akihiro Yamaguchi’s 2:07.01 from 2012, which was the World Record and came before FINA started recognizing World Junior Records, at least 3 age-eligible swims have been under FINA’s official record in the event but have gone unrecognized.

FINA didn’t start recognising world short course records in the SCM 4x50m until a few years after that race, so we have the weird situation where the European record is faster than the World record!

To be fair, trying to stay underwater when wearing two flotation suits must be pretty difficult!

Because FINA is too lazy to do a good job at most things. See world junior records, it wouldn’t take anyone of us a day to fix those ourselves looking through history

I don’t think Elijah Winnington’s 200 free LC or 400 free SC have been ratified either . Crazy stuff .

HOT TAKE: FINA does a bad job of doing what they’re supposed to do.