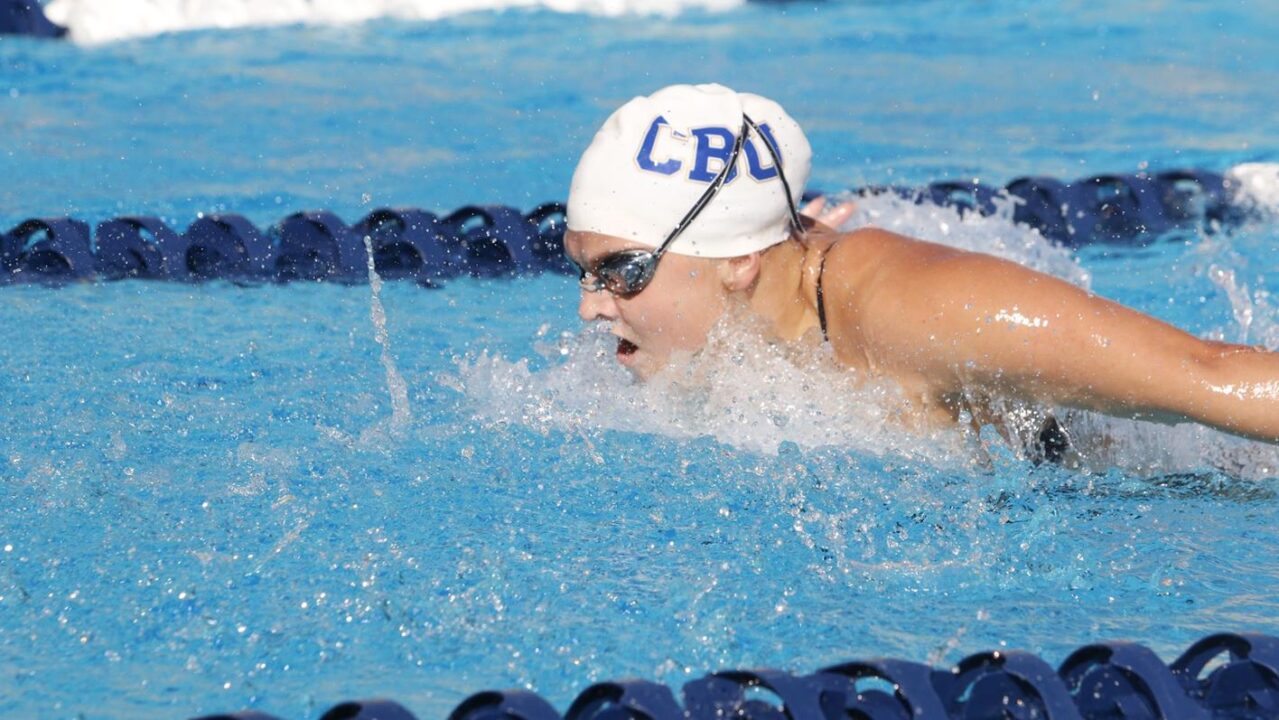 RIVERSIDE –California Baptist University honored 21 swim and dive seniors prior to Saturday’s final home meet against Grand Canyon. The Lancers reminisced about fun memories and departing seniors left their remaining teammates with bits of wisdom before challenging the Lopes in the pool.

SWIM
The men walked away with 11 total wins on the day, including a pair of relay victories. An all senior relay team made up of Jacob Leahy, Scott Tolman, Josh Walters and Matthew Niculae touched first in the 200-yard medley relay in a time of one minute and 31.48 seconds, edging the Grand Canyon A Team by .12 of a second.

Evan Honer defended his pool strongly against the Lopes, earning both wins in the dual. He first took the 3-meter with a score of 350.25 before taking the 1-meter title with a total of 345.08.

UP NEXT
The Lancers’ next pool date will be on January 29 in La Jolla when they take on the Tritons of UC San Diego. That meet is set to begin at 12 p.m.

Despite not having the strength of a full roster, the GCU men pulled off some impressive wins against the Lancers.

“It was great to see our athletes compete well as we continue to work our way back into form after dealing with COVID-19 and isolation setbacks,” head coach Steve Schaffer said. “Day by day, week by week we are getting better.”

Curbelo tied for the win in the 100 butterfly with a time of 49.62, alongside CBU’s Brendan Man. He also finished second behind McKean in the 200 butterfly.

The men completed the meet with a down-to-the-wire race as senior Dawson Sloan and CBU’s senior Jacob Leahy battled it out in the last leg of the 400 medley relay. A difference of .06 seconds put the Lopes in second after Leahy punched the pad first.

The divers battled a tough group in the Lancers. Sophomore Isaac Poole competed very well against former WAC champion Evan Honer. Poole took home two second-place finishes in the 3-meter with a score of 317.93 points and the 1-meter with 300.45 points.

At 3 meters, classmate Nicholas Gunn placed on the podium in third place with a score of 287.48 points.

“I thought the divers did well today in challenging conditions,” head diving coach Hunter Shafer said. “The men were highlighted by two second-place finishes from Isaac Poole. He is on a good track to be very competitive at WAC.”

Up next, the Lopes will host UNLV for Senior Day on Feb. 5 at Fr. Edward A. Reese Aquatic Center.

RIVERSIDE, Calif. – The Grand Canyon women’s swimming and diving team defeated California Baptist, 163.5-132.5, at Lancer Aquatic Center on Saturday. The women won their fifth consecutive meet this season in addition to improving to 3-0-1 against the Lancers.

“It was great to see our athletes compete well as we continue to work our way back into form after dealing with COVID and isolation setbacks,” head coach Steve Schaffer said. “Day by day, week by week we are getting better.”

GCU started the meet with a win in the 200-yard medley relay, posting a time of one minute and 45.24 seconds.

Lopes freshman Maria Chatzi led the women with two out of the seven individual wins on the day. Chatzi won the 100- (52.36) and 200- (1:55.30) yard freestyles. The Loannina, Greece, native also finished second in the 200 individual medley (2:09.14) with third- and fourth-place finishes from freshman duo Fruzsi Macsok and Lauren Hicks.

It was a collective team effort from the Lopes. Five additional swimmers won individual events to put GCU on top.

GCU junior Briana Rittenbach swam a 58.23 in the 100 backstroke for the win.

Lopes seniors combined for a total of three wins. Backstroker Robyn Edwards was victorious in the 200 backstroke with a time of 2:03.86 and was runner-up in the 100 backstroke (58.39)

Seniors Claire Banic claimed the 50 freestyle with a time of 24.35 seconds, while Emily Muteti won the 100 butterfly, posting a time of 57.45.

The women closed the meet against the Lancers with a sweep in the relay events. They went one-two in the 400 medley relay with Muteti, Banic, Edwards and freshmen Maria Brunlehner posting a 3:34.08 for the win.

On the springboards, junior Abigail Erickson earned two third-place finishes on the 1-meter (230.63) and 3-meter (259.43) events. Freshmen Reagan Fulton and Shiori Bak placed fourth and fifth behind Erickson at 1 meter.

“I thought the divers did well today in challenging conditions,” head diving coach Hunter Shafer said. “The women were led by Abigail Erickson, who dove solid and is making progress.”

Up next, the Lopes will host UNLV for Senior Day on Feb. 5 at Fr. Edward A. Reese Aquatic Center.