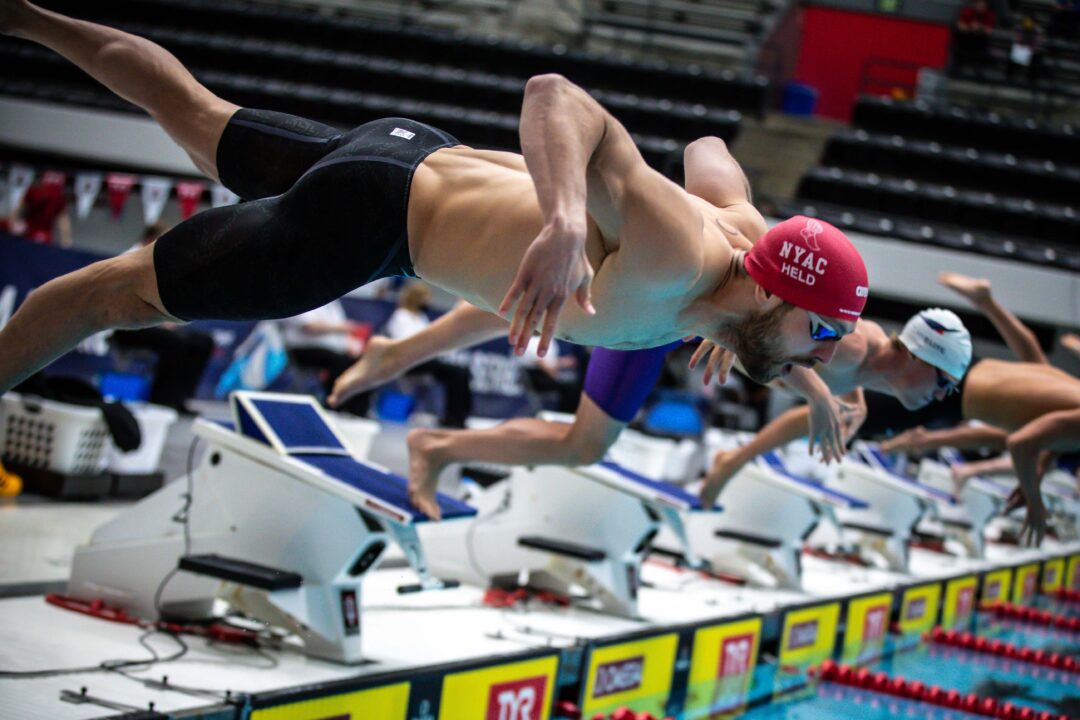 Ryan Held thinks that the fastest relay made up of one name is Ryan, but some other names may have a strong case as well. Archive photo via Jack Spitser/Spitser Photography

A recent Instagram story from Olympian Ryan Held posited that no other “name group” could beat an “all-Ryan” relay and while he has a strong case, let’s look a little closer and see what name would generate the most competition.

By “name group”, we mean a relay consisting of four swimmers who share the same first name. Held’s post referred to a 4×100 medley so we’ll first look at that race. Check out the team that Held drew up, followed by the four strongest contingents we could think of: Team Michael, Team James, Team Matt/Matthew, and Team Adam.

The twelve swimmers that make up these teams include some of the shining stars of the past few decades and several Olympic gold medalists. Based on best times alone, take a look at how each team would fare:

There are two caveats to consider here and even though they have the quickest add-ups, Team Michael may not have the strongest case.

First, these times are the quickest swims that each man has swum from a flat start, not with a relay takeover. Some get more of an advantage than others from that takeover momentum, meaning the relay format could shake things up a bit.

Second, it’s possible that Michael Phelps never swam a fully tapered, fully shaved 100 backstroke during the peak of his career. The same goes for Ryan Lochte in the 100 breast and Ryan Hoffer in the 100 butterfly. Their entries in this relay represent off events for those three (at least in long course), meaning that if this was a real situation and each man was in their prime, perhaps the times would look different.

From legends like Matt Biondi, Michael Phelps, Matt Grevers, and Ryan Lochte to current stars like Ryan Murphy, James Guy, Matt Richards, and Ryan Held, this hypothetical lineup of men would surely make for a great race. While many members of some teams are retired at this point, it’s not something we’ll ever see happen, but it’s interesting to consider what the best medley relay of 4 currently active men would be the fastest.

Notably, the only team that consists of 4 currently active swimmers is Team Adam. Considering Adam Barrett‘s recent return to elite competition when he raced for Energy Standard during ISL season 3, it looks like Team Adam would have the best shot at a race like this today.

Let us know in the comments which team, if all 4 swimmers were in their prime, you’d like to see swim most, and if there are any other names with 4 standout swimmers that you think would throw together an impressive time.

This is my favorite one and part of me is mad that it may have come too late for most people to have seen it, but another part of me is glad that it’s the cherry on top of a great thread.

In lane 4 representing Reasons Why My Wife Doesn’t Want To Kiss Me Anymore:

This might be the best swimswam article of all time. Comments section is so much fun

Is Milorad Serbian for mike? did I miss that in the article?

He often goes by Mike socially, and his official coaching bio lists him as “Mike (Milorad) Cavic”

A fast one , Team Matt

It’s the fastest, « Mike » cavic in team Michael is an impostor