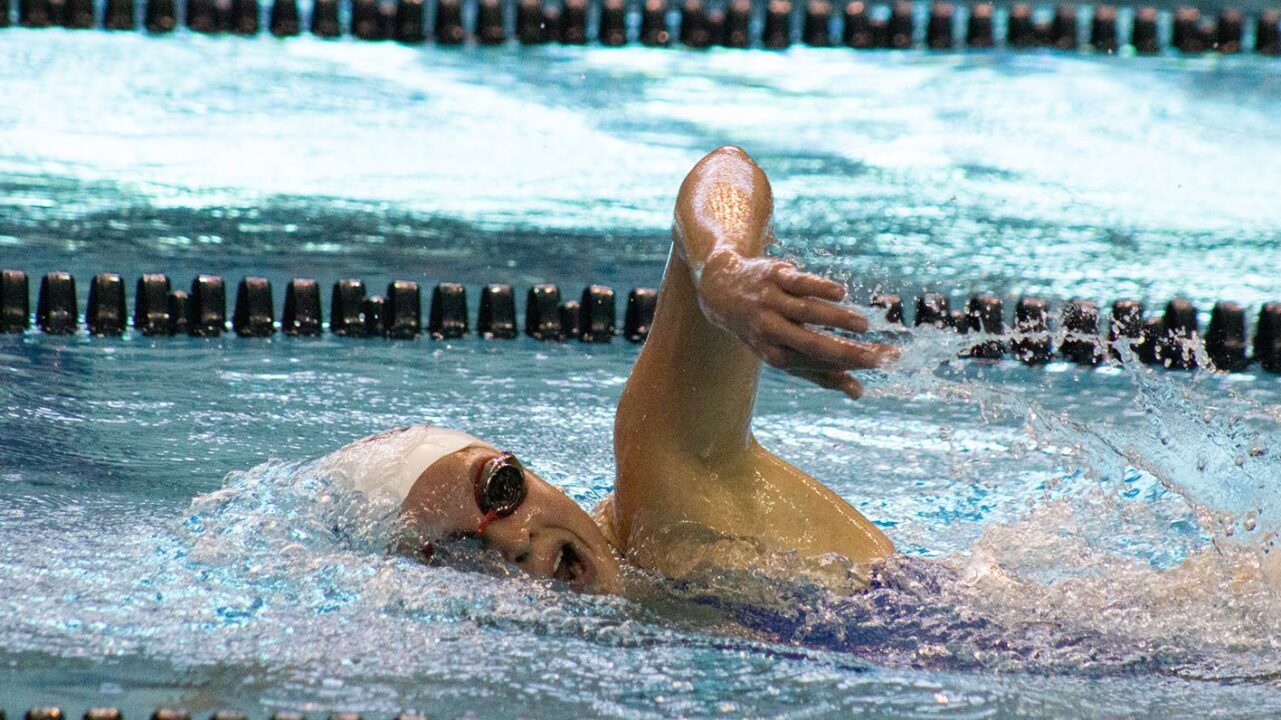 The two teams tied on Saturday, NAU's Senior Day. This is the last meet for NAU's swimmers, though the divers will participate in a diving invite in February. Archive photo via Kaycee Palmer

FLAGSTAFF, Ariz. (January 22, 2022) – The Lumberjacks found themselves tied with the New Mexico State Aggies after a close dual meet, with a final score of 132-132.

In front of an energetic crowd at the Aquatic and Tennis Complex Saturday morning, the ‘Jacks showed out for their seniors with one more dual meet for the last full home meet of the 2021-22 season.

“There was a lot of good energy, today was all about our seniors and celebrating them. We’ve got a ton of work to do ahead of conference, but I’m really proud of everyone’s efforts and really happy for our seniors. We’re looking forward to the next month, to get sharp and to prepare for what’s going to be a great battle at the conference championships.”

“I did like to see that we had a lot better taps and directions with the dives, we need to clean up our entires but I like where we’re at right now. I was really happy to see Aly Jones with two good meets after injury, Victoria, Emily, and Maegan Jensen did great jobs, it was especially nice to see Aly shine in her senior meet.”

NAU Diving will host the second Lumberjack Diving Invite of the year Feb.4-6 at the Aquatic and Tennis Complex. The Lumberjacks will then gear up for the WAC Championships that will be held in Houston, Texas Feb 23-26 and will be streamed on ESPN+.

FLAGSTAFF, ARIZ. – The NM State swimming and diving team competed to a 132-132 draw with Northern Arizona on Saturday at the NAU Aquatic and Tennis Complex.

On the day, the Aggies finished the day with seven first-place finishes as sophomore Lindsay Puhalski and junior Aimee Burton each turned in standout performances for Head Coach Rick Pratt‘s squad. The NM State seniors also turned in a timely performance in the final event of the day to land a tie with the eight-time WAC Champion Lumberjacks.

MEET HIGHLIGHTS
· In the opening event of the day, the Aggies placed three swimmers among the top four finishers as Lindsay Puhalski took first with a time of 58.06 seconds in the 100-yard backstroke. Maude Boily-Dufour followed Puhalski to take second (58.60) and Anabel Ivanov landed in fourth (59.16).
· An Aggie swimmer was also atop the standings in the second event as Aimee Burton paced the competition in the 100 breaststroke, finishing with a time of 1:05.48.
· The Aggies then swept the top three spots in both the 50 free and 200 individual medley.
· In the 50 free, Burton’s time of 23.62 was good for the top spot while Neza Kocijan and Lina Khiyara took second and third, respectively. Burton’s mark is also good for the second-fastest 50 free time for any Aggie this season.
· Puhalski was the fastest swimmer in the 200 IM event as she turned in a time of 2:07.48. Meanwhile, Lauren Hemburrow placed second and Jordan Andrusak finished in third.
· NM State’s top diver on the day was Italia Aranzabal as she claimed third in both the 1-meter and 3-meter events. The junior from Mexico City, Mexico, scored 267.08 points on the 1-meter board and 264.83 on the 3-meter board.
· The 100 free was arguably the Aggies’ most dominant event of the day as NM State landed swimmers in positions one through four. The top finisher was Burton, who reached the wall at 52.35 and was followed closely by Airam Oliva-Aun who finished with a time of 53.21.
· In event number 10, the 200 back, two of the top three racers had NM State caps on. Puhalski led the way with a time of 2:05.66 which was good for the third-fastest 200 back time for the Aggies this season.
· The final event of the day proved to be the most important event of the day as the Aggies got exactly what they needed from their seniors in the 800 free relay to land a tie with the talented Lumberjacks.
· In the 800 free relay, Airam Oliva-Aun, Lauren Hemburrow, Anabel Ivanov and Neza Kocijan teamed up to post a time of 7:51.19 to secure the first-place finish and pull even with Northern Arizona.

QUOTABLE | HEAD COACH RICK PRATT
“We had a very successful day today despite the tie and I’m really proud of the way our team fought for every point,” Pratt said. “Aimee Burton, Lindsay Puhalski and many others were very impressive today and had some fast swims despite the travel and setting. For our seniors to win that last relay says a lot about their impact and leadership with our team and it was a fun moment for all 12 of them. The energy on deck was intense and our team was not intimidated to compete. We’re in a great place heading into the last month before WAC.”

UP NEXT
· The Aggie return home to the friendly confines of the NM State Swimming and Diving Complex as they host rival New Mexico on Saturday, Jan. 29.
· The meeting with the Lobos will also serve as Senior Day for 12 Aggies. The meet is scheduled to get underway at 11:30 a.m.