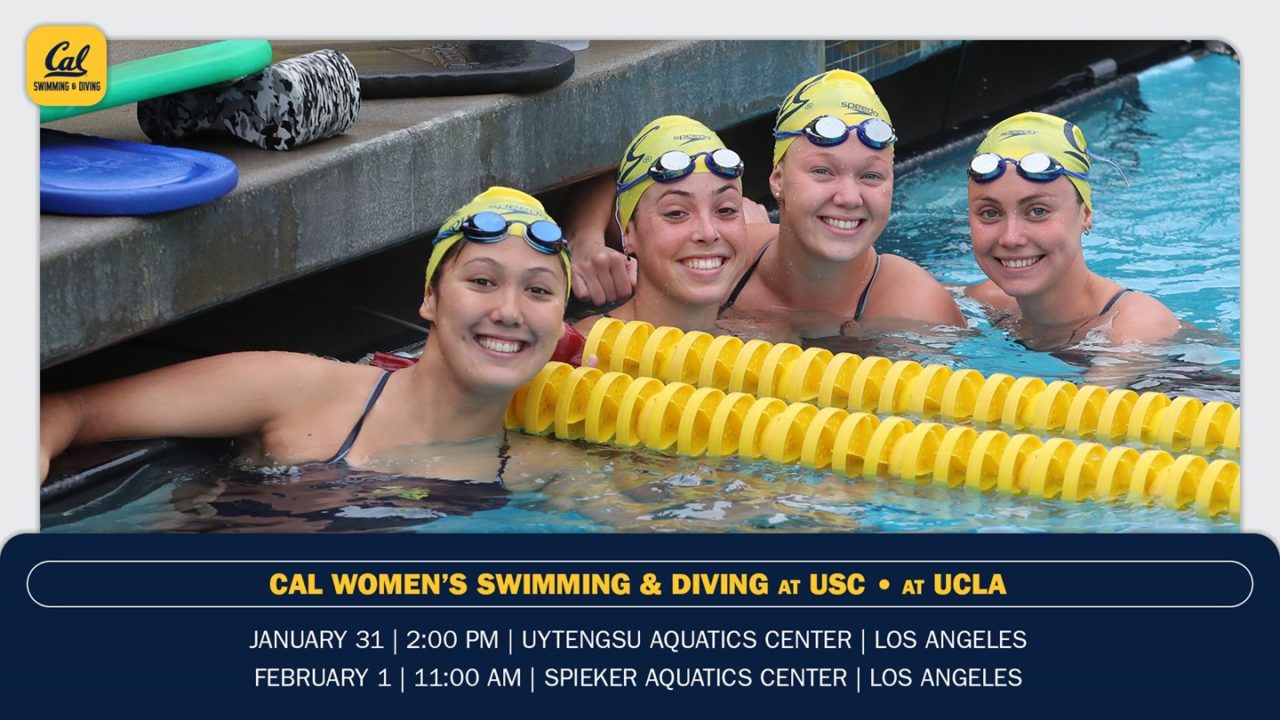 With its home schedule for 2019-20 now complete, the Golden Bear women's swimming & diving team hits the road for their final three dual meets of the season. Current photo via Cal Athletics

With its home schedule for 2019-20 now complete, the Golden Bear women’s swimming & diving team hits the road for their final three dual meets of the season, starting this weekend when Cal visits USC on Friday and UCLA on Sunday. The Bears close the regular season at Stanford on Feb. 15. Cal is coming off of an impressive sweep of the Arizona schools, led by Abbey Weitzeil‘s pool and dual-meet records in the 50 free (21.73 vs. ASU) and 100 free (47.79 vs. Arizona). In addition, Alicia Wilson won a combined four races and set season-best times in the 100 free, 200 free and 100 fly. The last time Cal traveled to Los Angeles in 2018, it prevailed by a 169-131 margin at USC – its first road victory in the series since 2012 – while the Bears earned a 183-111 win at UCLA.

WEITZEIL LOWERS OWN AMERICAN RECORD
Senior Abbey Weitzeil lowered her own American record in the 50-yard free at the Minnesota Invitational when she touched the wall in 20.90 seconds Dec. 5 to become the first woman ever to break the 21-second barrier. Weitzeil, who was named the Pac-12 Swimmer of the Month for December, has held the American mark since March 4, 2016, when she went 21.12 before her enrollment at Cal. She reset the record on her way to the NCAA title last March with a time of 21.02. Overall, Weitzeil owns the top three times and five of the top six times ever in the 50 free.

BEAR SMARTS
The Bears picked up a pair of academic honors mid-October, extending a string of scholastic honors for the program. First, the NCAA released its latest Graduation Success Rates, and Cal posted a 100% GSR for the fourth year in a row. Then came news that the Bears were the recipient of a second consecutive Newmark Award for having the highest GPA among all 30 Cal teams (3.370).

GOLDEN BEAR NOTES
Head coach Teri McKeever has signed a contract extension through the 2023-24 season … Cal signed seven recruits for 2020-21, headlined by U.S. National Team member Isabelle Stadden, the bronze medalist in the 200m back at the Pan Am Games last summer. Others in the class are: Mara Allen, Francesca Colby, Emily Gantriis, Kayla Haigh, Tea Laughlin and Nicole Oliva … seven-time Olympic medalist Dana Vollmer was enshrined into the Cal Athletic Hall of Fame in November, becoming the 13th women’s swimmer inducted … Farida Osman (’17), who competes for Egypt, has been named the 2019 African Sportswoman of the Year.

Thought they are holding a giant corn in the thumbnail