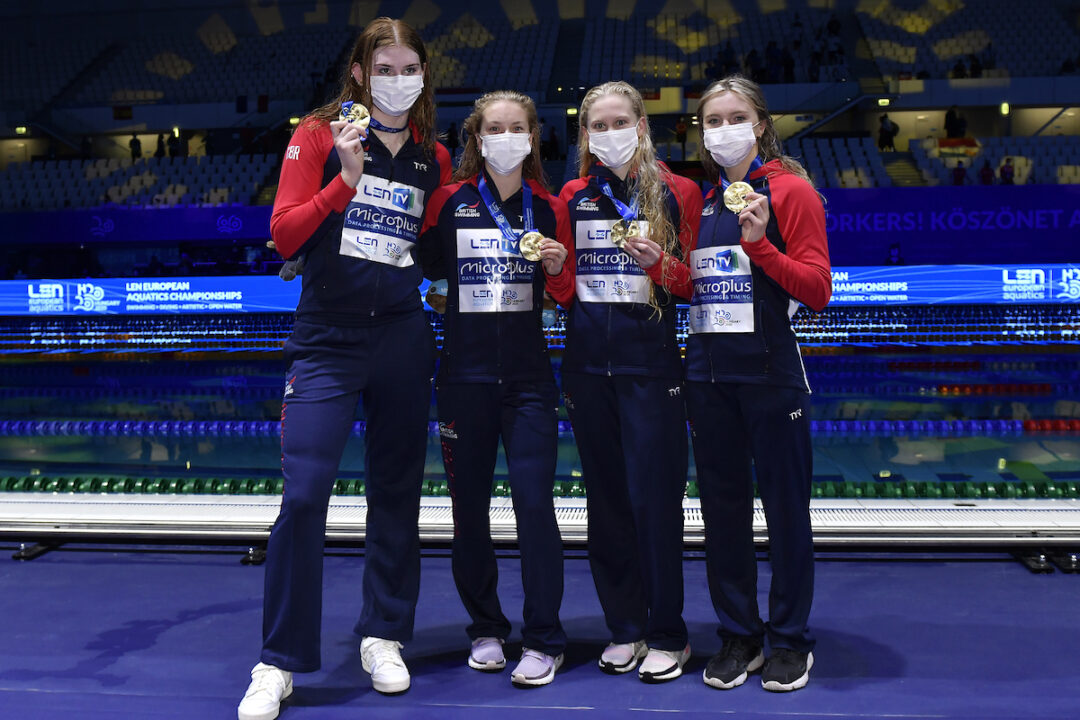 The British women lowered their National Record in the 400 freestyle relay for the second time in a little more than two months, qualifying fourth overall into the Olympic final.

The quartet of Lucy Hope, Anna Hopkin, Abbie Wood and Freya Anderson combined for a time of 3:34.03, winning the event’s opening heat on Saturday night in Tokyo and lowering their previous mark of 3:34.17 set by the same four swimmers at the European Championships in May.

At those Euros, Great Britain’s performance not only smashed the previous British Record of 3:35.72, set at the 2014 Commonwealth Games, but also earned them their first victory in the event since 1927.

The difference-maker compared to the relay at Euros was Hopkin, who was almost a full second faster than she was two months ago in 52.65.

Moving into the final in fourth, including qualifying ahead of the United States (3:34.80), is a massive leap forward for this relay.

The Brits didn’t even field a team in the women’s 400 free relay at the 2019 World Championships, qualifying for the Games as one of the four wildcard entries (they also had to get under the stringent British Olympic qualifying standard of 3:35.64, which they did easily at Euros).

With Hope and Anderson capable of going significantly faster than they did tonight, the Brits may very well thrust themselves into the mix for a medal, with the Netherlands (3:33.51) and Canada (3:33.72) using most of their ‘A’ swimmers in the heats and the U.S. looking weaker than they have in a long time.

The last time the British women won an Olympic relay medal in swimming came in 1980 (400 medley relay), while the last medal in the 400 free relay was a bronze back in 1932 in Los Angeles.

Solid swim for Team GB but by no means at their best. If Lucy Hope can go sub 54 tonight then Anderson, Heemskerk and Oleksiak should be diving in pretty evenly. Then it’s anyone’s race for silver and bronze – hoping Anderson can knock a second off her time this morning at least!

Looks like GB can drop 1-2 seconds, will definitely be in the battle for silver and bronze. Looking forward to watching this one.

3:32.5. Will smash the British record and win a bronze medal.

Gold: Australia (Will probably go like 3:28. By far the most certain world record in the pool.)
Silver: China (they’re adding their 2 best for the final)
Bronze: Great Britain

I think your times for the British look pretty realistic if things go well for them. And I agree that Australia and probably China are too good.

I think the issue is then that they need to beat all of the US, the Dutch and Canada. They’re all close so I think it will come down to Anderson v Heemskerk v Oleksiak v whoever the US have on anchor. And I don’t think Anderson starts favourite in that particular shoot out.

But you never know.

Very good swim by Abbie Wood in particular -really augurs well for her 200IM (although there’s part of me who would have liked to have seen her have a pop at the 400IM).

Relatively easy to see how they can improve in the final with Hope and Anderson swimming more like Budapest. The concern – medal – wise – is that China, the US, Canada and possibly even the Dutch will all improve considerably too.

If Britain are really going to challenge for a medal, they need Freya Anderson to step up and become the 100 freestyler that people have been suspecting she could be.

Would be interesting to see what Abbie Wood could do on a 400IM fully tapered but wouldn’t be worth it.

Michael Phelps is the only swimmer in history that could go all out on a 400IM at the start of the meet then perform at his best in 200 events with 3 rounds and perform well on relays so I wouldn’t want Abbie Wood to risk it.

Even Ryan Lochte faded at London 2012 after the 400IM. Hagino hasn’t managed it either. And Hosszu has never had loads of relay swims too.

The 400IM just takes so much out of you and is maybe Abbie’s 4th best event and fifth if you include the 4×100 relay.

Thank you for the reply.

I think Belmonte has won medals at the 400IM and then backed it up with medals in the 800m and 200 fly. That’s pretty brutal though – so I take your point! I actually have a sneaking suspicion that Belmonte might win the 400IM later. She’s a real assassin of a swimmer who just finds a way to win.

I don’t blame Wood for not doing the 400IM – I just would have liked to see how she’d have got on.

Sorry but I’ve no French national record to report.
But no miracle without Wattel swimming in prelims.

How TALL is Lucy Hope??? Good golly she looks HUGE compared to the other swimmers on the relay!!! I am guessing 6’5″?

Yeah, the other three GB girls are all under 1.70 too, which makes Anderson look even taller still.

You don’t say HUGE for a 20year old girl. Im sure she is stunning in person .