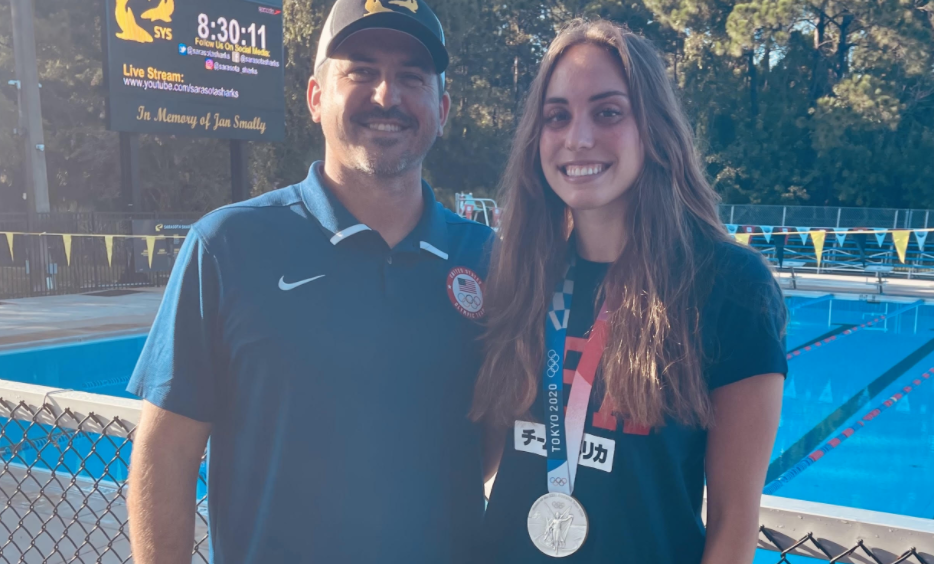 Recently, up-and-arrived Canadian superstar Summer McIntosh has moved to Sarasota to train with Brent and the Sharks. Current photo via Brent Arckey

Brent Arckey is in his 12th year with the Sarasota Sharks and he’s been the Head Coach/CEO since 2017. The Sharks finished 7th last year in the USA Swimming Club Excellence Program rankings and Brent has been on multiple USA Swimming International staffs. Recently, up-and-arrived superstar Summer McIntosh has moved to Sarasota to train with Brent and the Sharks.
In this conversation we discuss the training approach from top to bottom at Sarasota. Brent breaks down five different phases of training throughout the season, including one that he considers “experimental,” at this point. Dryland starts at the very base level with the Sharks, as games and fun activities to keep kids moving. As they progress through the program they are challenged with a variety of Dryland exercises, run by the GAIN program.
We discuss age group progressions, coaching progressions, Brent’s own swimming progression, as well as the evolution of mental health as just plain health. It’s a fantastic conversation that you won’t want to miss!
SWIMSWAM PODCAST LINKS

What I really like about this interview is how “every swimmer matters.” Because “many are called, and few are chosen”, its not hard to get caught up in the excitement of the next great champion (like Summer McIntosh.) I thought it was great how Brent highlighted that the club promotes a culture of excellence – for everyone, even swimmers just trying to make it to a state championship. Paying attention to everyone’s goals (not just the future Olympians) not only promotes this culture – it also promotes a sense that the club will help everyone be their very best, no matter what their very best is. This is a lesson that all swimmers can rely on long after they have… Read more »

The best of the best! Good work and great interview Brent.

We did not claim that it was

Yes, the link with the title was: Brent Arckey on coaching Summer McIntosh, managing high-performances athletes (like Emma Weyant).

Good stuff, thanks for sharing Brent! SwimSwam needs to do a version of Practice&Pancakes(Age-Group) for Club teams around the US!

Coleman has actually done quite a few club teams. Club teams can be logistically a little trickier – lots of parents with lots of opinions when you get minors involved. Blue dots on this map are club teams.

Thanks for clarifying Braden! Forgot to take into account parents and the filming of minors. Maybe skip the video of the actual swimming and just a 1:1 with the teams coaches on their philosophies etc.

Yes, I get that ha, but just mean more clubs less colleges

You mean like this video that you’re commenting on?

Good interview. Lots of good information. Would still like to see a P&P of the Sarasota team in action! Also, an interview with Vern Gambetta somewhere in the future would be fantastic as well.