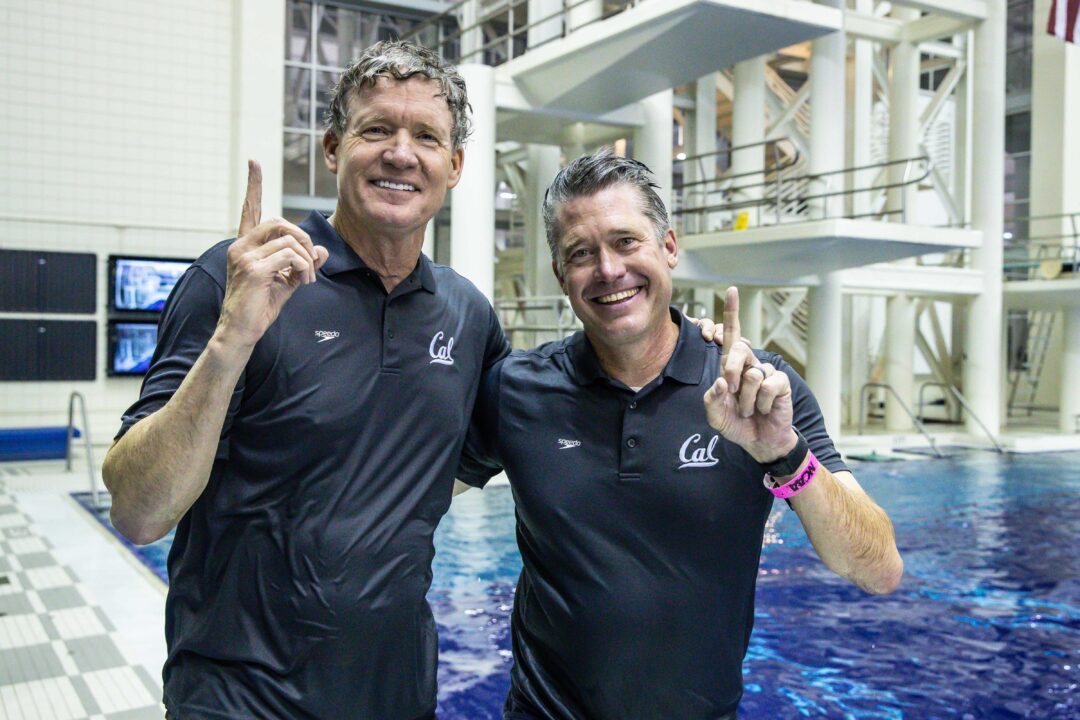 Last season, David Marsh (left) worked with the Cal men's team. This year, his focus is on the Cal women. His contract reveals what happens if... Archive photo via Jack Spitser/Spitser Photography

Update: after original publication of this article, Cal provided the contract for assistant coach Jesse Moore. That information has been incorporated into the article below.

David Marsh’s contract at Cal includes a provision that would terminate the agreement if suspended women’s head swimming & diving coach Teri McKeever were to return to the program.

The University of California, Berkeley has provided the current contracts for the school’s five swimming & diving coaches to SwimSwam two months after the request was made. The school declined to share the new contract of head coach Dave Durden, who for the first time this season is leading the men’s and women’s swimming & diving programs, saying that has not been fully executed.

After women’s head coach Teri McKeever was put on a leave of absence over the summer following allegations from current and former swimmers of verbal and emotional abuse, the school made men’s head coach Dave Durden the nominal head coach of both programs, and brought in veteran NCAA coach Dave Marsh to support him as the associate head coach of the women’s program. Among other things, Marsh was the architect of the Auburn dynasty of the 1990s and 2000s, where he led the men’s team to seven NCAA titles and the women’s team to five.

Marsh is at Cal on a one-year contract, as are all of Cal’s assistant coaches, with one caveat clause.

The term of the Contract begins on August 1, 2022, and terminates on July 31, 2023 (or upon return if Teri McKeever as coach of Women’s Swimming & Diving, whichever is earlier).

That clause protects the school from a situation where the result of the independent investigation acquits McKeever and she is reinstated as head coach, which would give the team too many coaches.

It is unlikely that if McKeever were acquitted in the investigation that she would return to lead the program, however. Usually in those scenarios, a buyout for the remainder of the contract is negotiated instead and the parties part ways.

Marsh is receiving a base salary of $120,000, making him the highest-paid of the team’s assistants, plus a signing bonus of $8,400. He also receives bonuses based on the performance of the women’s team:

Unlike what we see at other schools, Cal structures its coaches’ incentive programs to favor performance at the NCAA Championships rather than conference meets.

The team’s new men’s and women’s assistants, Matt Bowe and Jesse Moore respectively, are being paid $91,800. They  also have incentive structure, though it is less than Marsh, who has a higher title than the two assistants. The net result will likely be more money for Bowe than Moore, as the defending NCAA men’s champions from Cal are more likely to hit the benchmarks than are the women:

Head diving coach Pei Lin is also new and has a three year contract worth $85,000 per year, plus incentives based on both the performance both of her divers and the program overall.

Cal currently has 5 announced paid coaches on staff, including Lin, which is 1 fewer than the maximum allowed for a combined program.

Dave Durden‘s prior contract (which is technically still in effect) offers him $270,000 in base salary this season, though that number will presumably increase with his new responsibilities. McKeever’s contract has a base salary of $242,500 for the current season.

The school has not provided any updates to the investigation of allegations against McKeever that began in May, more than five months ago.

The Cal women are next in action against UC San Diego on November 4. The same day, the Cal men will race their annual triple distance meet against Stanford.

First sentence should read like this. “terminate the agreement “if” suspended women’s head swimming & diving coach Teri McKeever were to return to the program” not of.

Is Teri the only female head coach to win an NCAA title? Surprised women aren’t rallying around her. She’s a pioneer.

I’d love to see her have a shot to win one more. If not at cal than somewhere legit

She made the trains run on time.

The sport should not have a place for people like her, female or not.

Bowe was hired as an associate head coach, same title as Marsh. I’d be upset if i were him that he has the same base salary as Moore who is just listed as an assistant and a much lower base than Marsh.

That’s incorrect. The men’s team cannot have both Marsh and Bowe as paid assistant coaches. As is stated in the article, Marsh’s contract is terminated if Teri McKeever is reinstated.

Durden and Marsh are arguably the top swim coaches globally right now. Why would Cal consider bringing Teri back, especially in light of all the allegations?

Top 2 globally? U have got to be kidding. They might not be top 2 in California

How can you say Marsh is a top swim coach globally right now? Gorbenko is the only athlete he has that finaled at the last long course worlds or Olympics and i don’t think he’s her full time coach. He’s an all time great, and still probably a fantastic coach, but lots of other coaches have better current results.

a lot of things happened in San Diego and while he didn’t send as many Olympians to Tokyo as to Rio, he made a huge impact on the swimming culture here. Saying he put San Diego on the (swimming) map would sound like a cliche but the easiest way to put it. There are very few coaches with his skills and experience, he is easily in the top

“Not as many” is actually zero Olympians. He had zero swimmers in Tokyo. And not sure how anyone could say that San Diego is on the swimming world map right now.

I’m sorry that you’ve been lied to, but you’ve actually got it backward. Marsh is a terrible CEO. Ask anyone at SwimMAC (not me, I’m not at SwimMAC), but that was definitely not part of his strengths.

I think swimmers like swimming for Marsh – I think he’s a ‘swimmer’s coach’ for sure.

Marsh is a HOF coach that can only find temp assistant coaching jobs nowadays? What does that say? I swam for him and the brilliance came from his assistants.

What about Teri taking a USAS club job. The silence from USAS is deafening. Are these accusations USAS violations or no?

There’s a current safe spot investigation, but they won’t do anything before the Cal side is resolved. Don’t get CSCAA still having her on their board when it should be much easier to get someone out of that position.

The reason to go through with the McKeever investigation and not sweep it under the rug is justice for the athletes and a deterrent for other monsters like McKeever. We all know what happens when a scandal is handled by good old boys (think gymnastics)

They are newsworthy, I think.

They’re also not hard to find with a cursory search. For any public schools you can find everyone’s salary with a little bit of work.

it’s all public info, and that’s common knowledge. It just wasn’t in good taste, for me, to reveal it here and make it a big part of the story

This is an old-school mentality. And that’s fine. Nobody wants you to change your instincts, but maybe you should recognize that they’re old-school and not sell-out on them.

They are public employees and work for public universities. The public has the right to know, and it’s the media’s job to disseminate that info. They quite literally work *for the people*. All of the citizens of their state of California are, at the end of the day, *their bosses*. Something like 95% of jobs in the US are in the private sector – anybody who doesn’t like their salary being public should go find one of those.

What would happen if Nort Thornton came back from the dead and wanted to coach again?

If he did, he would definitely want to coach. <3