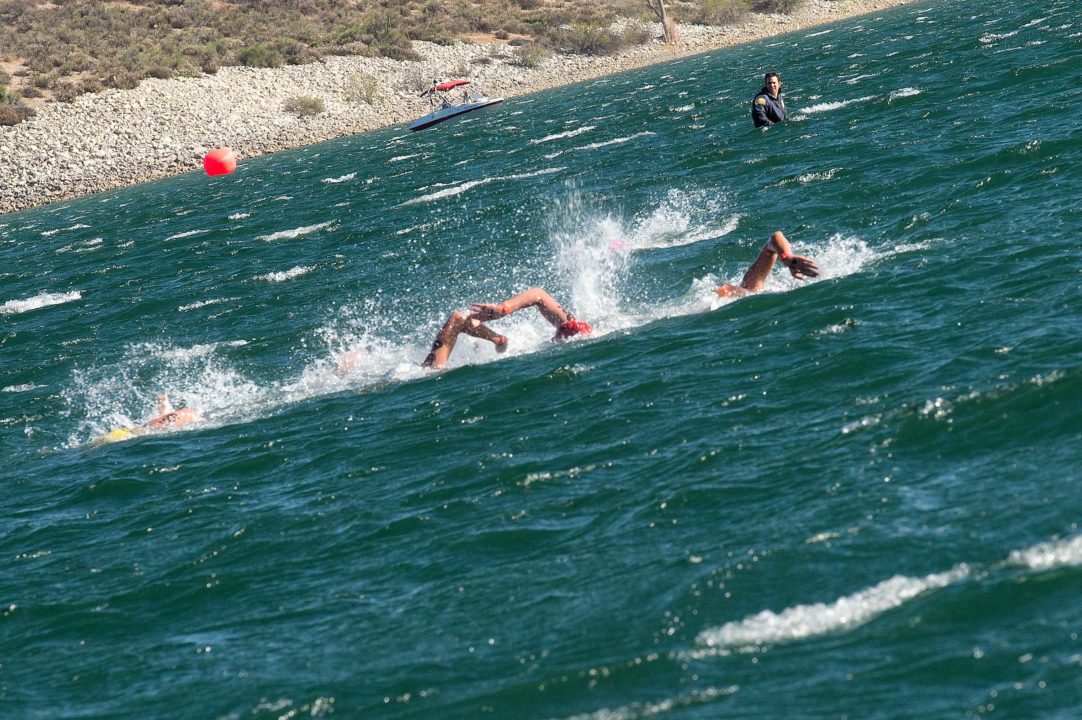 The Brazilians did it again in Barcelona, grabbing two medals in the second women's open water event. This time, though, it included gold. (Stock Photo: Mike Lewis/OlaVistaPhotography.com)

The Brazilian open water swimmers are absolutely on fire.

After taking silver and bronze in the women’s 5km race, Poliana Okimoto and Ana Marcela Cunha moved up to the top two positions in the 10km swim on Tuesday morning: the premier race of the open water schedule.

They’ve tripled that total already here, and Cunha later will go for her best race in the longer event with a chance to add more hardware.

Germany’s Angela Maurer took the bronze, a second back, in 1:58:20.2, as the biggest veterans of open water swimming ruled the day. It’s perhaps not a coincidence that the three medalists in this race are three women who take in almost every stop of the FINA Open Water 10KM series. Maurer, a true veteran, won her last World Championship medal in the 10km race a decade ago in this very same city at the 2003 event (though she’s done very well in the 25km race since then).

Meanwhile, Greece’s Kalliopi Araouzou was in line at the final pass of the feed station to make a Greek sweep, after her teammate Gianniotis Spyridon won the men’s race on Monday, but in the final dash she got caught in behind the lead and couldn’t get past.

The highest-finishing American was Becca Mann in 1:58:23.4, only 4.2 seconds behind the winner Okimoto, which is a good result for her first open water race of this caliber. She was just ahead of teammate Christine Jennings, who was 10th in 1:58:23.6.

Much like we’ve seen throughout this meet, there was a huge lead pack in this 10km final, meaning that there were some big names who had disappointing place finishes, but still very good times (the top 28 were all better than 1 hour and 59 minutes). That includes the two-time defending champion at this event Keri-Anne Payne, who was 14th in 1:58:25.8 and Olympic champion Eva Ristov, who was 9th in 1:58:23.4.

Spain’s dual-threat Erika Villaecija Garcia in 1:58:27.8 for 17th; and Australia’s Melissa Gorman in 1:58:30.9, plus Martinga Grimaldi, who medaled at both the Olympics and the last World Championships in this event were all in the lead pack as well. None of the expected medal contenders really fell out of that front group. The top 19 swimmers were all in a grouping of just over 9 seconds, which equates to about 11 meters, so tightly-packed indeed.

In a very odd occurrence, none of the three medalists in this race were on the podium in either Shanghai or London, showing how different courses can benefit different swimmers in different ways. Thus far, this seems to be a very technical course that has benefited real veterans and the older swimmers.

The top 10, plus selected other finishers:
Full results available here.

It is interesting how they swim in a pack so often. Can’t see why someone just doesn’t get out there away from everyone I think there has been to much talk of drafting in their minds. With the way swimmers train why not in leas than 2 hours.

Unfortunately, at this level it looks like OW swimming is evolving into something akin to cycling in the flat stages of the Tour de France, where drafting is of paramount importance in the early stages of the race and final placing comes down to a final, furious sprint. I say unfortunately because there is no equivalent of “mountain stages” or “time trials” that would play to different strengths. Wouldn’t it be fun to have a multi-stage race (maybe three to five stages) where you had a time trial event (swimmers leaving every 30 s or so for a 3 km race), a short event (5 or 10 k), and a long event (25 k)? And then maybe add a point-to-point… Read more »

DL, I am pretty sure that “fun” and “25k” are mutually-exclusive terms.

IIRC, they’ve done something similar to a team time trial in the past at Worlds- two men, one woman from each country swimming in a small draft pack- time of record is for the last finisher.

I agree, although some can win by jumping away from the pack relatively early (e.g. Mellouli in London last year). When I still followed cycling, I liked the time trial format most. It’s a much better way to determine who is the best swimmer in a single long distance event.

The time trial format is also interesting for the spectators: you actually know who swims past you, and you can watch them go by over a prolonged period of time.

I guess you are from Germany. Who do you think have good chance to medal in the pool apart from Deibler in 100 fly?

Miss Steffen has a chance in the 50 free.

Yes, you’re guessing totally right 🙂
Besides S.Deibler in the 100 fly (could be a big suprise winner !),
I also see the mens 4×200 free relay as a potential bronze medal candidate,
even without Paul Biedermann and Tim Wallburger (out due to illness) with
a little bit of luck. And dont count out C.vom Lehn in the 200 Breast (he is in good shape (3rd at “11 world champs). Yes, Bobo, Britta could suprise in the 50, but it is not clear
yet if she will swim it because she was ill at German Nationals in April and there were
to women under the FINA A standard (D.Brandt and D.Schreiber). But i want… Read more »

0
0
Reply
Marlins are faster than Adrian
Reply to  Leclave

Steffen, much like Cielo, is totally washed up and doesn`t stand a chance to even make the finals. When she isn`t wearing an X-Glide, she is just another swimmer.

Cielo not going to final.. that is pretty hard to happen..

He is still a top medal contender on 50 fly/free..

0
0
Reply
aswimfan
Reply to  Marlins are faster than Adrian

Stefen and Cielo are great swimmers, they are not just “suit’ swimmers, but yes, they wouldn’t have gotten anywhere near their WRs without X-glide

Is drafting forbidden at Worlds?

The good thing about open water swimming, its the fact all type of bodies attend the event.Poliana and Ana Marcela are only around five four tall.They dont stand a chance against the giants of the pool.Poliana still holds Brazilian SCM records in 800 and 1500 free.

Congrats to Poliana after having such a hard time last year on OG with Hypothermya and Cunha not qualifying..

Sorry that I don’t know much about open water swimming. But is a 10 second gap between 1st and 20th usual?

I don’t know anything about open water so I don’t understand these so little differences between the swimmers after 10 km. Probably a drafting notion. I’m sure an expert will explain that very well.

Tea – I wouldn’t call it “usual,” because not many fields are this deep. But when there are deep fields and a fair course, it’s not that big of a surprise.

OW swimming is much like a marathon. Unlike pool swimming, it’s not done as much in a ‘bubble’ or a ‘lane’. You don’t just go out and swim your race and hope for the best time. There’s passing involved, there’s a lot more drafting involved, there’s positioning and lines involved.

The result is that the first huge chunk of the race is very much about seeing what you can drag out of your competitors, and then the last 2km or so (maybe?) is seeing who has what left.

Eva Risztov! It reminds me of great battles in the pool with Yana Klochkova around 10 years ago. She was a silver girl at this time. 4 silver medals at the Berlin European championships in 2002. 3 silver medals at the Barcelona world championships in 2003. Great to see she has a successful second career in open water. Olympic champion last year in London. 9th this time. Very long career for someone who has swum the hardest events very young at the best level.