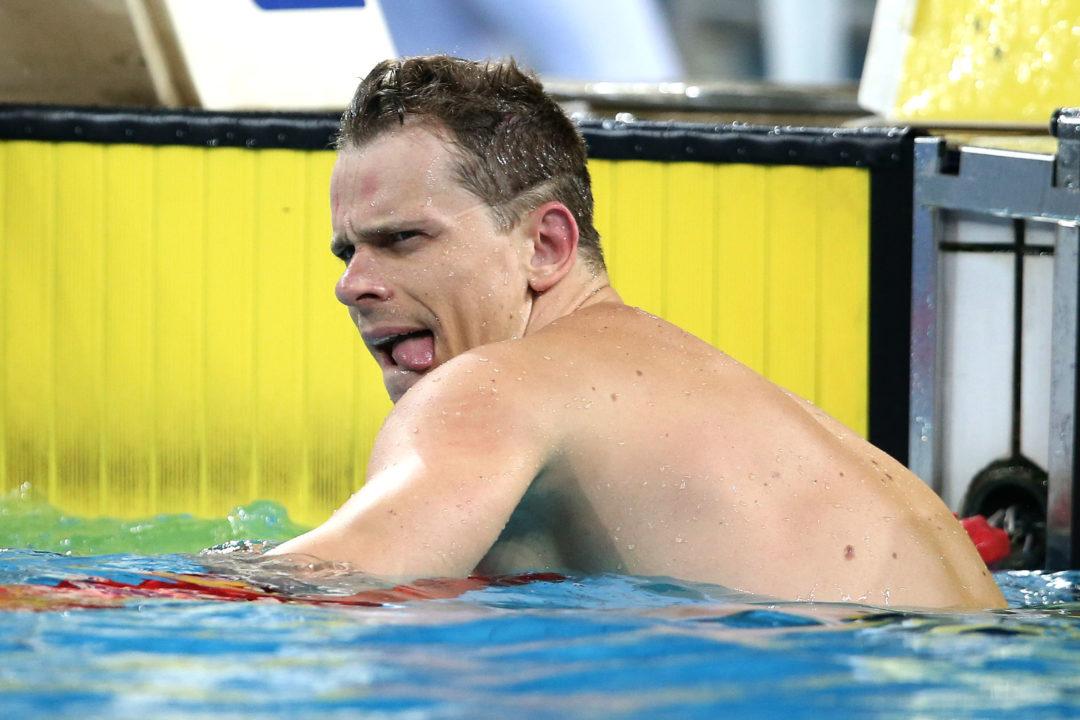 Cesar Cielo was one of 16 swimmers named to Brazil's roster for the 2017 World Championships in Budapest. Archive photo via Satiro Sodre/SS Press

After the Maria Lenk Trophy concluded on Saturday, it was somewhat up in the air as to who would be named to Brazil’s World Championship team. It was expected the top-8 FINA point scorers would be there, but would any additional swimmers be added? And if so, how many?

That question was answered today, as they have announced their roster for Budapest.

The team of 16 features, as expected, the top-8 FINA scorers combined from the Brazil Open in November and the Maria Lenk Trophy. Along with those, seven others were added with the next highest FINA points in Olympic events. And finally, Nicholas Santos was added as the 16th member in a non-Olympic event, the 50 fly, after posting the fastest time of the year. His swim actually scored the highest number of FINA points of anyone, as it made him the 2nd fastest performer in history.

Notably making the team was Cesar Cielo, who missed the Olympics last year and subsequently took a break from the sport. After the meet Cielo wasn’t sure if he’d be picked up for the team or not. He managed to make the team off of just three months of training, going 21.79 in the 50 free.

Along with the 50 free, Cielo will likely combine with Gabriel Santos, Marcelo Chierighini and Bruno Fratus to make up the men’s 4×100 free relay.

Though there were no women in the top-8, three end up making the team. Etiene Medeiros, who was one of the last to be named in the women’s 50 free, is a serious medal contender in the 50 back after winning silver two years ago in Kazan.

Take a look at the roster of 16 below, courtesy of Alex Pussieldi for Best Swimming.

IMO, Cielo should not be competing at any National, World, or Olympic events.

You need to chill, Tom…

Are you picking up the torch on anyone else? Are you proposing lifetime bans?

Tom actually does this any time there is an article on here about someone with a doping infraction, so it’s not as if he just has it out for Cielo. He’s very consistent. And while I don’t entirely agree that anyone with a past positive should be banned from international meets, I see his point. It is simply ridiculous how many athletes have pissed hot and then used the ol’ tainted supplements excuse. While I’m sure some of them are true (not that it excuses anything– the athlete is responsible for what goes in to his or her body), the sheer number of people singing this song casts doubt on the moral fiber of the lot of them.

One thing it is important to highlight in Cielo case is the reason he got only a warning(one month) instead of six months ban:
He did tests in most of the batches of his supplements(I think it was 3 out of 5), but didn’t in the last one.The tests were several times more expensive than the supplement.

They’ve had that chance every year but still blow it

Why is Thiago Pereira, one of the most decorated Olympians Brazil ever had, not on the team? Better yet, does anyone have any thought as to why Thiago (one of Ryan Lochte’s best friends) was forced to retire? Does anyone think it was political, attributable to the controversy surrounding Ryan Lochte at the gas station and the ensuing controversy?

He was without a club then decided to retire

Douglas – I think your second question answered your first question. He’s not on the team because he’s retired.

As for your second question – this is the first time I’ve heard any suggestion that he was forced to retire related to the Lochte event, but that seems quite unlikely. He’s 31, and by Tokyo he would be 35. That, combined with funding in Brazil drying up quite quickly, seems like a more reasonable explanation.

I believe his only involvement was that he invited Ryan to the party.. I’m not sure how any of the gas station fallout is really attributable to him, so I can’t imagine that causing anyone to “force” him to retire (can you cite that claim, by the way? I hadn’t heard that).