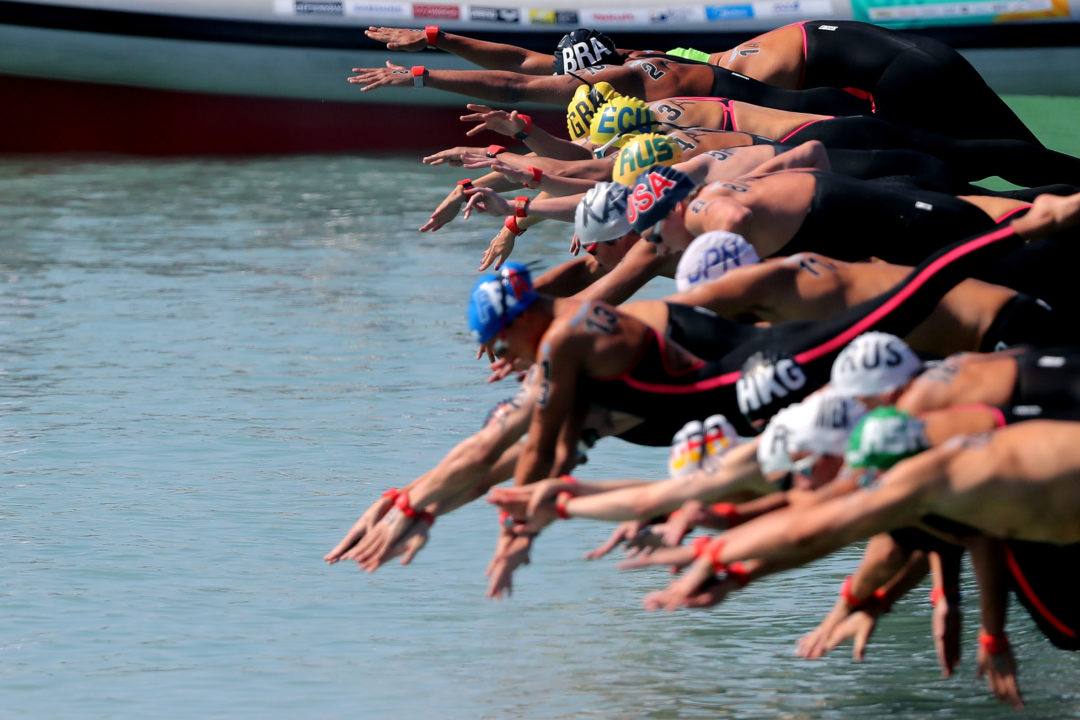 The shift will bring open water swimming much closer to the city than it was at the 2017 World Championships. Archive photo via Satiro Sodre/SS Press

France and Croatia had a combined 18 swims scheduled for Thursday morning’s prelims and they were all no-shows, reportedly due to positive COVID-19 tests.

Italian Lorenzo Galossi (pictured) heads into the semi-finals of the men’s 200 free with the top seed after clocking 1:49.27 in this morning’s prelims.

The 7 finals on day 3 include the men’s 100 free where Popovici has one more shot to outdo his relay leadoff time of 47.56 that set a new World Junior record.

Open water swimming at the 2020 European Championships, hosted in Hungary, will take place at Lupa Lake. This deviates from the traditional Hungarian host of open water swimming, the iconic Lake Balaton.

The 2020 European Aquatic Championships is officially being hosted by Budapest, and will take advantage of many of the same facilities as were used at the 2017 World Aquatics Championships that the city also hosted. In 2017, however, open water swimming was hosted at Lake Balaton: a freshwater lake that is the largest in central Europe and is populated by resort towns.

Traditionally, swimming events have launched out of Balatonfured on the north side of the lake with a population of about 13,000. This has necessitated lots of separate support facilities, including a separate opening and closing ceremony, as the cities lie about 90 minutes apart (130km).

Instead, moving the event to Lake Lupa will create a much more-compact event, if slightly-less picturesque. Lake Lupa lies about 15 kilometers north of downtown and features a newly-opened (2017) artificial-beach resort that can accommodate up to 10,000 people at a time.

The lake is an artificial one, a former quarry, that gets deep very fast – only 10 meters off shore, it’s 5 meters deep. The water quality will be among the best ever experienced for open water competitions: the spring that feeds the lake is also the primary source for Northern Budapest’s drinking water supply. The resort’s owners say that the water quality is rated at “99.2% of drinking water,” with the missing .8% just being the missing chlorine that is added.

The full-fledged version of the European Aquatics Championships, which includes long course swimming, is held in even-numbered years. During Olympic years (like 2020) the event is less-attended and less-glorious, but is still weighed as a proper European Championship. Historically, swimming has been held in the latter-half of this meet, but because of an unusually-late pair of Olympic test events in diving and synchronized swimming for late April, organizers flipped the European Championship schedule to give those athletes more time to recover.