Auburn Raises Over $25,000 in Swim for MS Campaign 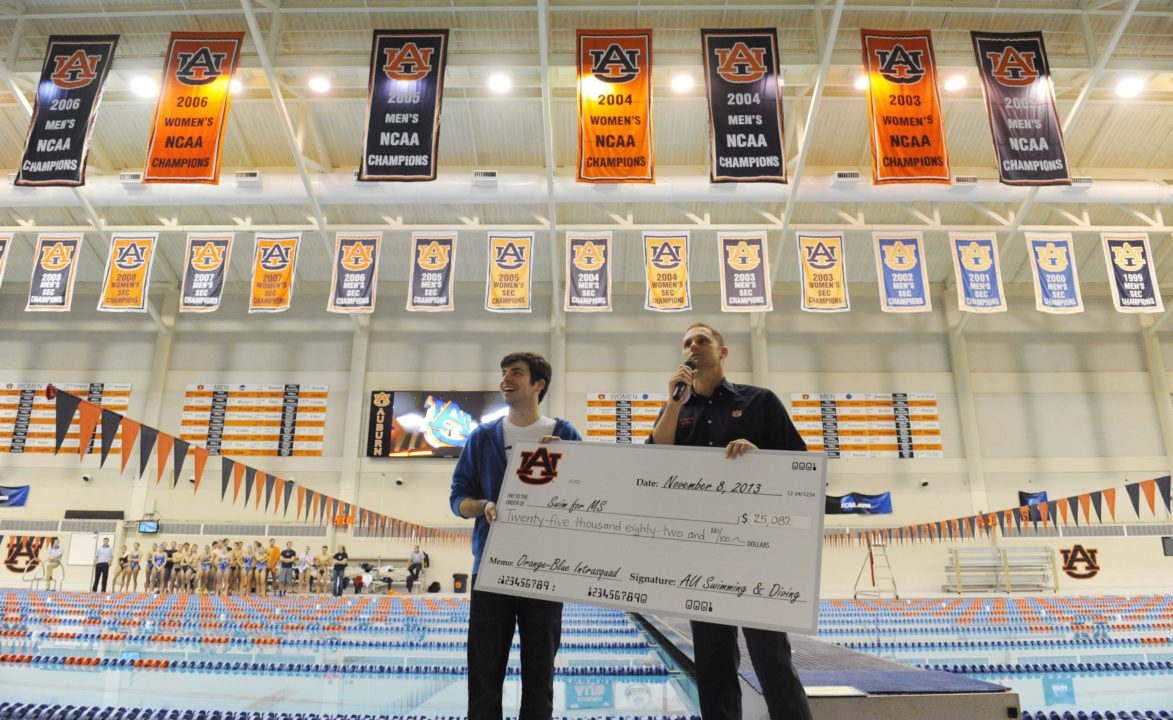 AUBURN, Ala. – The Auburn swimming and diving team completed its annual Orange and Blue Intrasquad Meet on Friday at the James E. Martin... Current photo via Lauren Bernard, Auburn University

AUBURN, Ala. – The Auburn swimming and diving team completed its annual Orange and Blue Intrasquad Meet on Friday at the James E. Martin Aquatics Center as the event benefited Swim for MS. The Tigers raised $25,000 that will go to the Multiple Sclerosis Association of America in honor of Trudi Hawke, the wife of Auburn head coach Brett Hawke.

“We set an early goal of $5,000 per team when we started the event and they quickly met that goal,” Brett Hawke said following Friday’s meet. “Once we set a goal these kids reached and I’m very proud of what they’ve done for this cause.”

The Orange team captained by Trudi, cruised to 191-76 win over the Blue team. The Orange squad won the meet’s first seven events to race out to a comfortable lead. The early start captures what the Tigers also did when it came to fundraising for Swim for MS.

“Trudi means so much to our team and she is a very special part of our team,” Emily Bos said following the intrasquad meet as she helped lead the Orange club to the win.

The meets featured several unique events including an underwater monofin race, mixed free and medley relays along with four rounds of elimination races in all four strokes.

The end result was big win for the Orange team, but an even bigger victory for Swim for MS as the Coach Hawke and Trudi Hawke presented the foundation with a check of totaling over $25,000, the largest gift by an event in the history of the program.

“We’re touched by all of these fans who came out and it just shows what a special place Auburn is to our family,” Trudi Hawke said. “There is so much love and support and I can’t express how appreciative we are that so many people were involved.”

The Tigers get back into competition on starting on Nov. 22 by hosting the three-day Auburn Invite at the Martin Aquatics Center. The event will host morning preliminary sessions and finals during the night sessions.

The above is a press release submitted by Auburn.