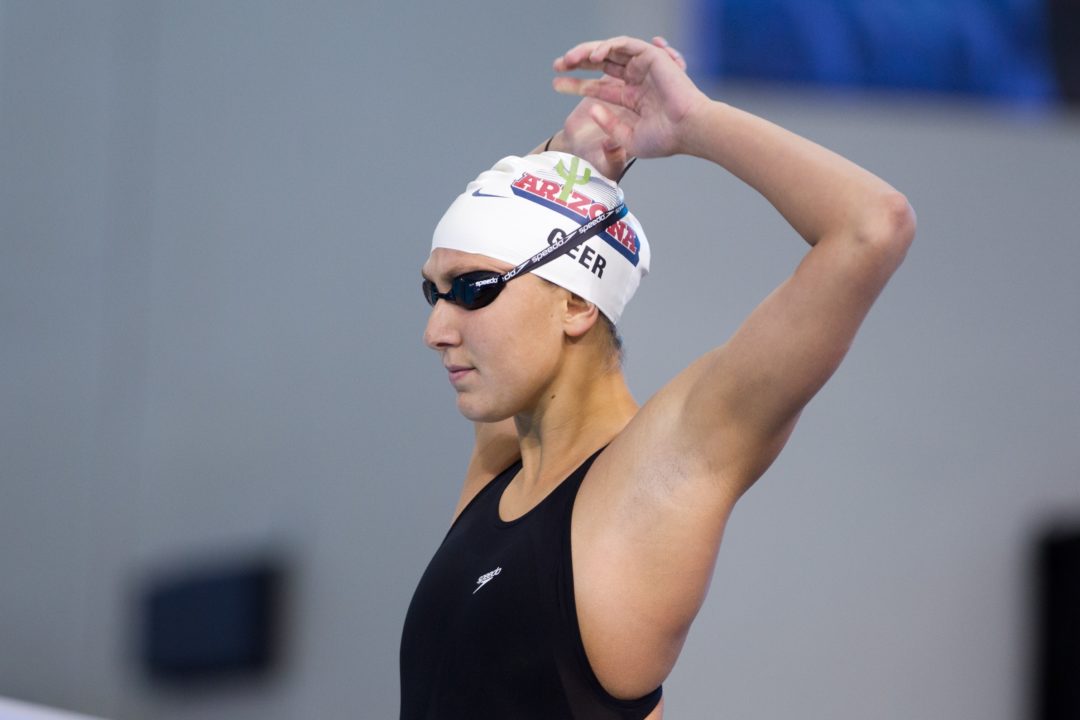 The Arizona Wildcats women won a very close meet over in-conference foes UCLA, giving an exciting start to Arizona’s homecoming weekend. The final score was 151-149, with the battle coming down to splitting-hairs, as a tie for 3rd place in the meet-closing 200 free relay decided the outcome.

Fast-forwarding to that exciting end, the Bruins held a lead going into the relay 139-144. Arizona needed a win, and then it would be up to the “B” relays to decide the outcome of the meet.

The Wildcats’ A did their part and took the win in the 200 free relay in 1:32.16, topping UCLA’s 1:32.46. Both teams had some spectacular legs (Arizona’s Gracie Finnegan anchored for them in 22.74, while UCLA’s star Ting Quah was a 22.77 on their second leg), but it was the Wildcats’ sprint depth that won that relay: their #3 and #4, Taylor Schick and Alana Pazevic, were better than UCLA’s #3 and #4, Kathryn Murphy and Jessica Khojasteh.

That was good enough for the Wildcats, though, as it locked up their overall team win, and a hard-fought one at that.

Arizona sophomore Bonnie Brandon has a strong meet; she now ranks second in the Pac-12 this season after winning the 1000 free in 9:55.74 (just jumping ahead of Missy Franklin in that event).

She would cap her individual events with a third win, this one coming in the 500 free in 4:53.12. That again tipped UCLA’s Lauren Baker, who was 2nd in both distance races, but the Bruins kept things tight by taking the 2nd-5th place spots (which actually outscores Brandon’s win by one point).

The breaststrokes saw not only wins, but it was where the grandest event domination from Arizona came into play. In the 100, Arizona sophomore Emma Schoettmer led a Wildcat 1-2-3 with a 1:01.63, followed by freshman Sara Borendame in 1:03.61 and Eve Sarris in 1:04.22.

Schoettmer came back again to win the 200 breaststroke in even more dominating fashion; she was a 2:12.50 to place 5 seconds ahead of anyone else.

Depth was a key at this meet, as the coaches made the unusual decision to score four per team, instead of three, which meant that the team who won a race was not guaranteed to earn the most points from it. That’s where UCLA benefited. Where they won, they won big, and often where Arizona won, the Bruins took up a lot of the 2-5 scoring positions to still make up ground in the scoring. The breaststrokes were a big exception to that.

Where Arizona did well in the freestyle and breaststroke races, UCLA did well in the butterfly events. Ting Quah, who was 7th at NCAA’s in the 100 fly last year, won that same race here in 54.41. That’s a season-best for her, and puts her 6th in the Pac-12 so far this year.

Tarazona, more of a 200 fly specialist, won that race in 2:00.03, just ahead of Kinnear’s 2:00.14. Arizona’s Elizabeth Pepper, a Florida State transfer this year, was the only Arizona swimmer to break up the UCLA stranglehold in that race, as the Bruins took the other four scoring positions.

Interim head coach Rick Demont made the gutsy decision to put Geer in three individuals instead of that last 200 free relay, and the move paid-off perfectly.

Interim Head Coach Rick DeMont?? Did I miss something here? Did we mean Associate Head Coach?

Well after reading through the PAC-12 threads I saw that EH is out on a leave of absence. Whatever it is, I wish him well and hope he gets back at it soon. In the meantime, Rocket will have Zona rocking and rolling for sure. BEAR DOWN!!

This just shows the true will and talent of the Arizona team and coaches. Rick DeMont is an amazing leader for the Wildcats in spite of all the turmoil. Cheers to Margo, Bonnie, Leticia and Emma and her teammates and let’s not Brandy Collins, the Assistant Women’s Coach. You guys are AMAZING!! GO CATS!