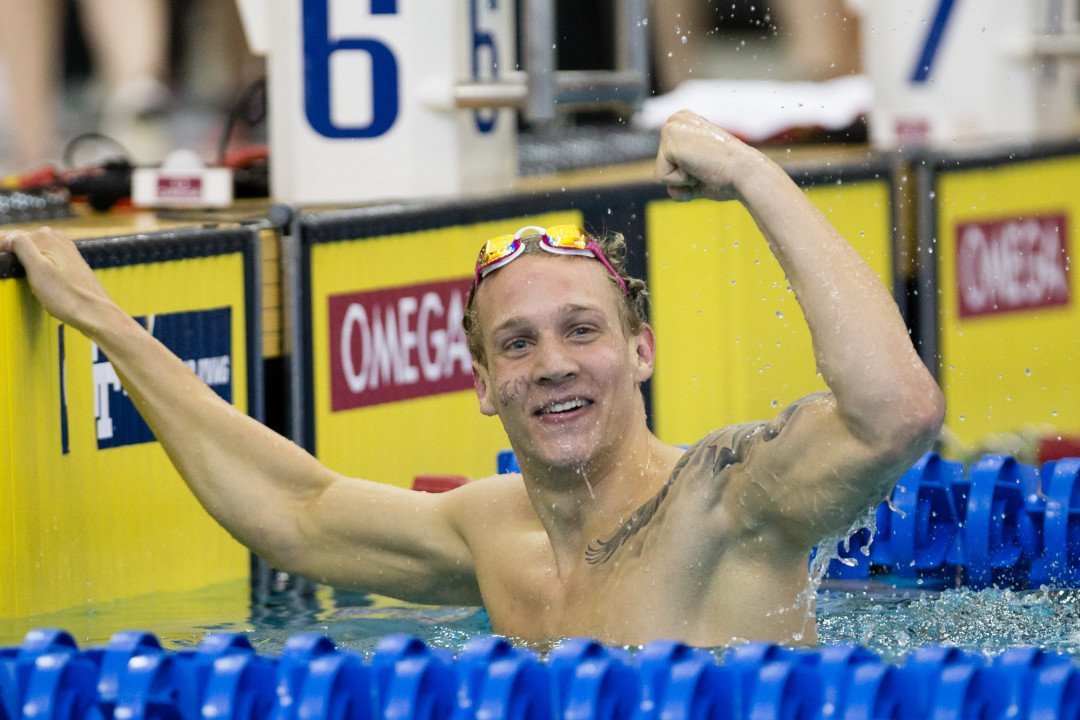 Katie Ledecky posted one of the world's fastest times in the prelims of the 200 free, but how fast will she be in finals after also swimming a monster 400 IM and almost chasing down NCAA champion Ella Eastin? Current photo via Tim Binning/TheSwimPictures.com

Sean Grieshop: I live by the motto “Every Practice Counts” (Video)

17 year-old Sean Grieshop won in dominating fashion, finishing almost fifteen seconds ahead of the field with a time of 15:18.88

Stanford women swept the top two spots in this event, with Ella Eastin winning in 2:10.54

Take a look at Elizabeth Beisel’s 200 back win and many others on the last day of competition at the 2016 Atlanta Classic Swim Meet.

Katie Ledecky posted one of the world’s fastest times in the prelims of the 200 free, but how fast will she be in finals after also swimming a monster 400 IM and almost chasing down NCAA champion Ella Eastin?  Townley Haas swims the men’s 200 free, trying to hit a time more consistent with the 1:30.46 he went in the SCY version of the race.  Jack Conger vs Tom Shields vs Joseph Schooling in the men’s 100 fly.  Can Breeja Larson hit a FINA ‘A’ cut like Molly Hannis did this morning, and will Andrew Wilson break 1-minute in the 100 breast?

Katie Ledecky lowered her prelims time by 3-one-hundredths tonight, finishing over 3 seconds ahead of Simone Manuel who took second in a 1:57.90, a time which will be very competitive in Omaha.  Rounding out the top three was Shannon Vreeland who took nearly a full second off of her prelims time.

Veteran Amanda Weir came in 8th with a 2:00.69.  Elizabeth Beisel moved from 20th to 11th in the B final with a 2:00.60, dropping 3.10 seconds from her prelims time.  Beisel actually tied for 20th this morning with Rachel Muller from Swim Atlanta.  A swim-off would have been required if Felicia Lee of Stanford who placed 13th in this morning’s heats had not scratched the finals of the 200 in order to focus on the 100 fly, where she is seeded 3rd.

The top three finishers in the men’s 200 free tonight were all SEC.  Jay Litherland dropped a solid 1:49.41 to clench the victory tonight in front of a (mostly) home crowd.  UGA teammate Gunnar Bentz came in second, but still a sizable 0.70 behind Litherland.  Jay’s brother Kevin earned fifth behind Cal’s Ryan Murphy.

Townley Haas slid from first to tenth place tonight, while teammate Jack Conger slid from second to sixth.  In the B final Caeleb Dressel and Sean Grieshop emerged as the top-2 going 1:51.56 and 1:51.96, respectively.  In the C final Corey Main dropped 2.56 second for 21st place.

Melanie Margalis surged from third to first tonight, getting by top-seed Molly Hannis.  Though Hannis was out fast in a 31.71, she couldn’t bring it home as quickly as Margalis who had the only sub-36-second second 50, going a 35.55.

Mara Lucenti of Nashville Aquatic Club and Jenny Wilson swimming unattached tied for 11th in the B final with a time of 1:11.82.  The C final was won by 15-year-old Isabel Ivey of Gator Swim Club, who nearly qualified for Olympic Trials in the event and dropped 2.5 seconds from her prelims time.

Andrew Wilson added over half-a-second to his prelims time, but was still fast enough to hold off a charging Reece Whitley.  On the back-half of the race Whitley out-split the entire field with a 32.78.  Wilson had the second-fastest second 50 with a 33.11.

Brad Craig and Michael Duderstadt tied for 5th with a 1:03.72, which was faster than either of them swam in prelims.

Felicia Lee made her scratch in the 200 free worthwhile by winning the 100 fly tonight.  Lee took it out fast with a 27.67 and finished strong with a 31.90.  Hali Flickinger did out-split Lee on the second half, but it wasn’t enough to make up the deficit of the first 50 meters.

Nine of the ten women in the A final of the fly swam OT-qualifying times (though Beryl Gastaldello who placed 5th is French).  Additionally, the top-3 finishers of the B final also went under the OT-qualifying time of 1:01.19.

Joseph Schooling‘s 100 fly this evening ranks him as the 15th-fastest in the world this year, despite being well-off his best time of 50.96 established last summer in Kazan.  Shields’ time of 52.02 was also good for the 17th-fastest time in the world this year (though he already sits at 6th with his time from Winter Nationals in December of 2015).  Shields and Schooling were in a league of their own, being the only two under 53 seconds tonight.

Caeleb Dressel took time off his morning swim, but still only placed sixth with a time of 53.75, tying with Gunnar Bentz, who already took 2nd in the 200 free tonight, where Dressel took 11th.  Though Dressel bested Conger at NCAA’s in the 100 yard fly and swam faster than Shields ever did in the yards version of the race, he still seems to be adjusting to swimming fly in long course.

Proving that her swims this morning were a mere rouse, Elizabeth Beisel surged to the victory in the 400 IM, registering the 4th-fastest time in the world this year.  Beisel took the race out fast in the fly and back, but was still trailing Maya Dirado at the 200-meter-mark.  Beisel made up the ground quickly in the breast and surged ahead of Dirado, where she pulled further away from Ledecky and Eastin.

While Beisel’s time catapults her to 4th in the world this year (though she was already sitting at 8th with her time from Canadian Olympic Trials about 5 weeks ago), Dirado’s is good for 13th-fastest and Ledecky’s 15th!  Despite Ledecky’s amazing time, 400 IM-ers can remain calm knowing that she (probably) will not pursue swimming it in international competition (this year), due to the IM’s proximity to the 400 free at Trials and in the Olympics.  However, more grueling schedules have been accomplished (cough, MP 2008).

Eastin, the top seed going into tonight’s final, placed 4th with a time of 4:40.77, a nearly-identical time to her morning swim.

Jay Litherland pulled off a very difficult double tonight, winning both the 200 free and the 400 IM.  Prenot already had a top-25 world ranking in this race, but with his swim tonight he has moved up even higher to 18th-fastest.  Litherland, meanwhile, takes over the 15th spot on the top-25.  Jay’s brother, Kevin, also finished 9th in the A final.

Marton Barta had a huge time-drop, taking over 6 seconds off his morning swim.  As Barta is only 16, he may yet make a run at the Junior World Record in this race.  After Barta top-seed Sean Grieshop finished fourth with a 4:19.83.  After Grieshop the rest of the field was 7 or more seconds behind, though Mark Szaranek of Gator Swim Club dropped a 4:23.28 in the B final to win that heat by over 5 seconds.

Seriously disappointed that they didn’t see fit to provide a live stream of the meet! It’s not like it’s 2016, or that it’s an Olympic year, or anything like that…

Tim – it won’t be quite real-time, but presuming the technology functions, we plan to have race videos up as each event wraps up.

It just boggles my mind that a big elite meet in this day and age doesn’t have live streaming, especially with how close to the Olympic summer we are. It’s not like there’s only one company that does live streaming, so there’s no real excuse to not offer it in my opinion.

I’m sure it’s because you have competing meets at the same exact days and time. We are being forced to view Charlotte when I would rather be watching Atlanta. I’m just saying.

Not so bad. As long as I can watch baseball and softball, that’s the most important….