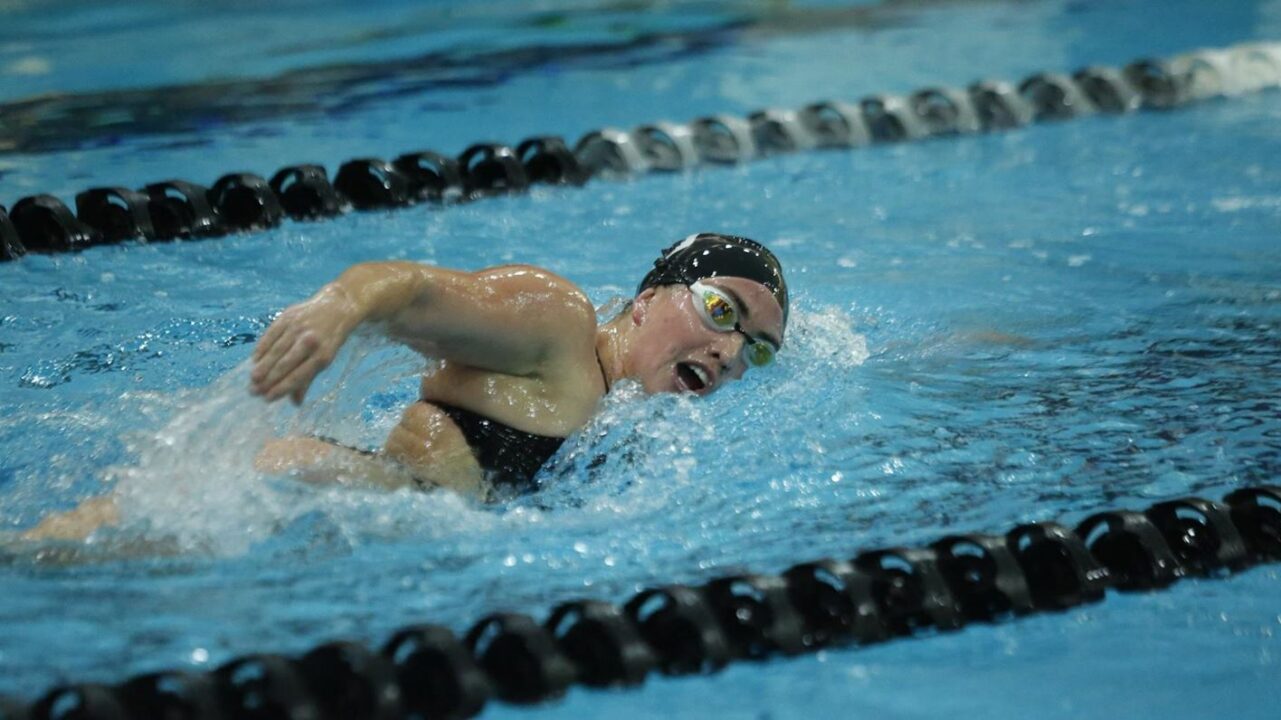 ORANGE, N.J. – The Army West Point swimming & diving team dominated Seton Hall on Saturday morning, as both the men’s and women’s teams picked up wins over the Pirates. The men earned a 183-116 result, while the women completed to a 161-138 victory.

The result marked the team’s second sweep of the 2021 campaign, as the Black Knights opened up their home at Crandall Pool with triumphs over Vermont and Binghamton earlier this season.

The Men’s Meet
Seton Hall kicked off the action with four-straight wins before Evan Yoo snapped the streak with his victory in the 100 Breast. Yoo out-touched a Pirate by 0.20 seconds to claim the team’s first individual win of the day.

Jacob Powell then went on to match Yoo’s winning effort in the 50 Free, which he took home with a 21.22-second swim. He was joined in the scoring by Nick Isenhower and Ian Shahan, who finished third and fourth, respectively.

Though the Pirates were favored early on in the meet, the Black Knights picked up nine-straight events, a stretch that included Yoo and Powell’s wins, to close things out. Kevin Lin highlighted the scoring spurt with a pair of individual victories in the 100 and 200 Free. He and teammate Evan Zhang (100/200 Breast) led the team with two first-place finishes apiece in swimming events.

On the boards, Daniel Alaimo dominated the competition and won both the 1- and 3-meter events. He led a Cadet sweep in the 1M dive, as he was joined on the podium by David Manelis and Isaac Newman. Army also earned key points from the 3M event, where David Manelis posted a third-place finish to join Alaimo in the scoring.

In addition to sweeping the 1M dive, the Cadets also matched the feat in both the 100 Fly and the 500 Free.

In the final event of the day, the team closed things out with a top finish in the 400 Free Relay. The quartet of Powell, Will Rankin, Owen Harlow and Isenhower out-touched a Seton Hall entry by 1.21 seconds to pick up the Black Knights’ last triumph.

The Women’s Meet
In a similar fashion to the men’s meet, Seton Hall was the favored team early on in the women’s action. Though Army claimed the first event of the day, the 200 Medley Relay, the Pirates went on to pick up three-straight wins to earn the advantage in the scoring.

Aurelie Migault accounted for the Black Knights’ first individual win, as she laid down a time of 1:07.39 to take home the 100 Breast. Migault was followed by teammate Megan Colpo, who narrowly out-touched a Pirate to finish second overall.

The Cadets traded wins with their hosts over the next few races. Jasmine Coe (200 Fly), Mary Rotenberg (200 Back) and Migault (200 Breast) picked up key finishes for the visiting team and prevented Seton Hall from going on a scoring streak.

In a meet that was tightly contested early on, the Black Knights were able to distance themselves from the Pirates with staggering performances from the divers. The trio of Minh Donnell, Abigail Gibbs and Acacia Chai swept both the 1m and 3m events in the listed order, accruing a slew of points for the visiting team.

Eventually, Meghan Cole helped the team to close out its victory with wins in back-to-back events. She took home the 100 Fly and the 200 IM, scoring 18 points in the process and was joined in the scoring by Coe, who finished second in the butterfly and third in the IM.

Though Seton Hall was able to claim the final race of the day, the 400 Free Relay, it was not enough to overtake Army for the lead.

Cadets’ Corner
“Today was a testament to our team’s resilience. Having people swim events that they might not normally do in the middle of hard training was an excellent opportunity for us to practice the mindset of the next man up. While we were a bit slow to get started, we were able find the intensity required for us to win. We had many people step up to win events. We will celebrate our achievements but the entire team is excited and ready to tackle the challenges that are ahead of us.” – Kevin Lin

“I really loved the team energy at the meet this weekend! It was awesome to watch all of the girls hyping one another up and I think it contributed to a lot of fast swimming.” – Meghan Cole

Coach’s Corner
“Seton Hall swam a great meet and pushed us the entire way,” head coach Brandt Nigro said. “I’m proud of the way our team fought back and rebounded after a few close losses to start the meet. I challenged our team today by putting many of them in events they don’t typically swim, but across the board they stepped up and got the job done. Early in the season it’s important that we make ourselves as versatile and multidimensional as possible so that we have many options come taper time. We learned a lot about the depth and grit of our team today. We also saw lots of little details that we need to fix in practice over the next couple weeks as we approach our mid season meets. Overall, two big wins for our program today. Now, it’s back to work and all eyes on our road meet vs UVA next weekend.”

What’s Next
The team will prepare for a quick turnaround, as Army is set to head to Virginia for a meet against the Cavaliers on Saturday, Oct. 30. The action is set for a 10 a.m. start, with diving scheduled to take place the night before at 6 p.m. The Virginia women’s team is coming off a National Championship title from the 2020-21 season, while the men finished eighth in the country.

South Orange, N.J. – The Seton Hall men’s swimming team fell to Army on Saturday at Arthur E. Imperatore Natatorium by a score of 183-116. The meet served at the home-opener for the Pirates of the 2021-22 season.

The Pirates started off hot taking first in the 200 Medley Relay as the team of Ross Pantano (Bennington, Neb.), Thomas Staes (Berlaar, Belgium), Justin Oosterwyk (Pequannock, N.J.) and Thomas Minar (Oxford, Conn.) combined to touch the wall in a time of 1:33.11.

Freshman Sean Vizzard (Mount Laurel, N.J.) followed up his strong collegiate debut with another strong performance against Army. Vizzard paced the pool in the 1000 Free doing so in a time of 9:38.24, controlling the race from the start.

The Pirates took first in a third consecutive event, this time behind Ben LaClair (Belchertown, Mass.). LaClair took first in the 200 Free touching the wall in a time of 1:42.39. Gideon Langenbusch (Oberhausen, Germany) also had a strong showing taking third place with a time of 1:43.61.

Continuing the Pirates’ early success was Pantano, who picked up his second first place finish of the morning leading the pack in the 100 Back. Pantano paced the pool with a time of 51.72. In the 100 Breaststroke, Justen Lopez (Levittown, N.Y.) placed third with a time of 58.31.

Oosterwyk continued his successful day in the pool picking up a first-place finish, his second of the meet, in the 200 Fly. Oosterwyk took first with a time of 1:50.61 while Ji Ho Lee (Charlotte, N.C.) placed third with a time of 1:55.68.

The Pirates closed things strong, filling out the second, third and fourth-place finishes in the 400 Free Relay. Minar, LaClair, Langenbusch and Oosterwyk placed second for The Hall in a time of 3:07.67.

The Hall will be back in action next Saturday, as they stay at home to host Monmouth. Start time for that meet will be 1 p.m. and serve as the Pirates’ final home meet of the fall season. The meet will be streamed live on the Pirate Sports Network.

South Orange, N.J. – The Seton Hall women’s swimming and diving team fell to Army by a score of 161-138 on Saturday at Arthur E. Imperatore Natatorium. The meet served at the home-opener for the Pirates of the 2021-22 season.

In the first event of the morning, the Pirates took second in the 200 Medley Relay as the team of Leiya Istambouli (Danbury, Conn.), Lea Moeller, Sierra Cripps (Seymour, Conn.) and Cornelia Jerresand (Taeby, Sweden) combined to touch the wall in a time of 1:48.53.

The Pirates took the top spot for the second consecutive event as Natalie Heim (Middletown, N.J.) placed first in the 200 Free with a time of 1:55.91. Amanda Zajdzinski took third in the event, doing so in a time of 1:56.68.

Making it three first-place finishes in a row was Madeline Field (Wheaton, Ill.) who took the top spot in the 100 Back. Field was the first to touch the wall, finishing in a time of 59.01. Istambouli and Catherine Horner (Lancaster, Penn.) took the third and fourth spots in times of 59.73 and 1:00.12, respectively.

The Pirates would close the day strong, taking first and third in the 400 Free Relay. The team of Istambouli, Jerresand, Moeller and Heim combined to touch the wall first in a time of 3:34.56.

The Hall will be back in action next Saturday, as they stay at home to host Monmouth. Start time for that meet will be 1 p.m. and serve as the Pirates’ final home meet of the fall season. The meet will be streamed live on the Pirate Sports Network.