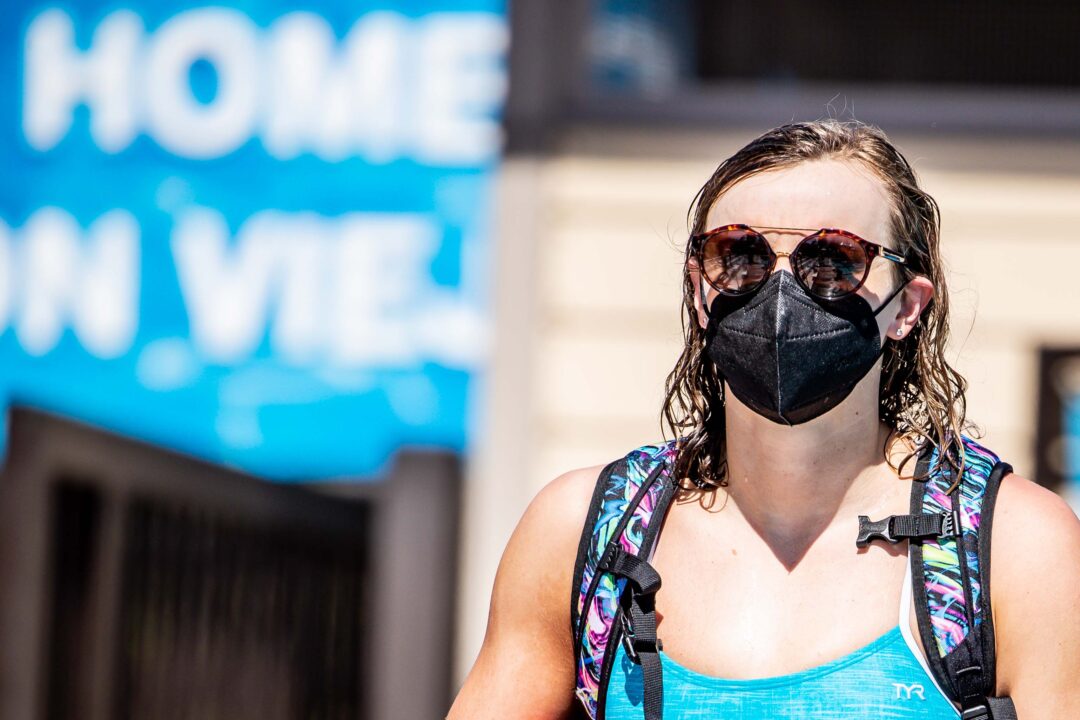 Ledecky recorded the 12th-fastest swim of all-time during a intrasquad meet at the University of Florida on Saturday. Archive photo via Jack Spitser/Spitser Photography

Corbeau took down Max McHugh and Reece Whitley, establishing the top time in the country in the process.

The University of Florida hosted an intrasquad meet last Saturday after their meet with Texas A&M was canceled due to COVID-19, and it produced some high-end results, most notably from seven-time Olympic gold medalist Katie Ledecky.

Ledecky, who announced that she was making the move to Gainesville in September after five years at Stanford, produced a blistering time of 9:15.18 in the women’s 1000 freestyle, which stands up as the 12th fastest performance of all-time in the event.

The 1000 free isn’t contested at the Division I NCAA Championships, so it’s difficult to know exactly what Ledecky would be capable of in the event at the height of her powers, but her American Record stands at 8:59.65 from the 2015 NCAP Invitational.

So while it’s still far off her PB, Ledecky’s time is certainly elite, especially given the fact that she’s no doubt coming off of (or in the midst of) a pretty significant training block.

In the NCAA, while the majority of leading times are from swimmers’ opening splits on the way to a 1650, Ledecky would lead the 2021-22 rankings by 15 seconds.

You can find intrasquad results via USA Swimming here.

In awe of how an unsuited, untapered ledecky can still casually leave the entire NCAA in the dust

Do we know that it was unsuited?

All Dual meets I have seen in person or online they are always racing in regular suits/practice suits – Except for one meet that UF used to select the last few swimmers for their SEC team. The swimmers that were already on the SEC team swam in regular suits.

KL is never casual when she races in my humble opinion, always something going on – Regarding the 8:59, in a recent interview Bruce Gemmel said that was the finest race he ever saw her swim, and he should know.

Those times are kinda pedestrian for Dressel. Hope that means he’s far from a taper.

I don’t know how pedestrian they really are, given that he is no longer competing or primarily training in short course, is in the midst of heavy training, and still managed to put down an unsuited 50 free that would be one of the top swims in the NCAA for the season (only beaten by rested, suited swimmers at their midseason invitationals). 19.1 is nothing to sneeze at. His 100 fly was definitely less impressive than his 50, but a 47 low unsuited unrested for someone who no longer prioritizes short course in any meaningful way is still not a pedestrian time.

That’s getting me thinking has anyone in a brief gone sub 19 yet flat start?

Pretty sure he’s also coming off of covid (per his wife’s IG stories), so give the guy a break.

There’s something beautiful about these swim of the week awards. One week it chooses between the best performance of the Olympics/World Champs, the next it chooses between kids swimming at a Junior Nats, and this week its between two of the best active swimmers doing time trials at intrasquads.