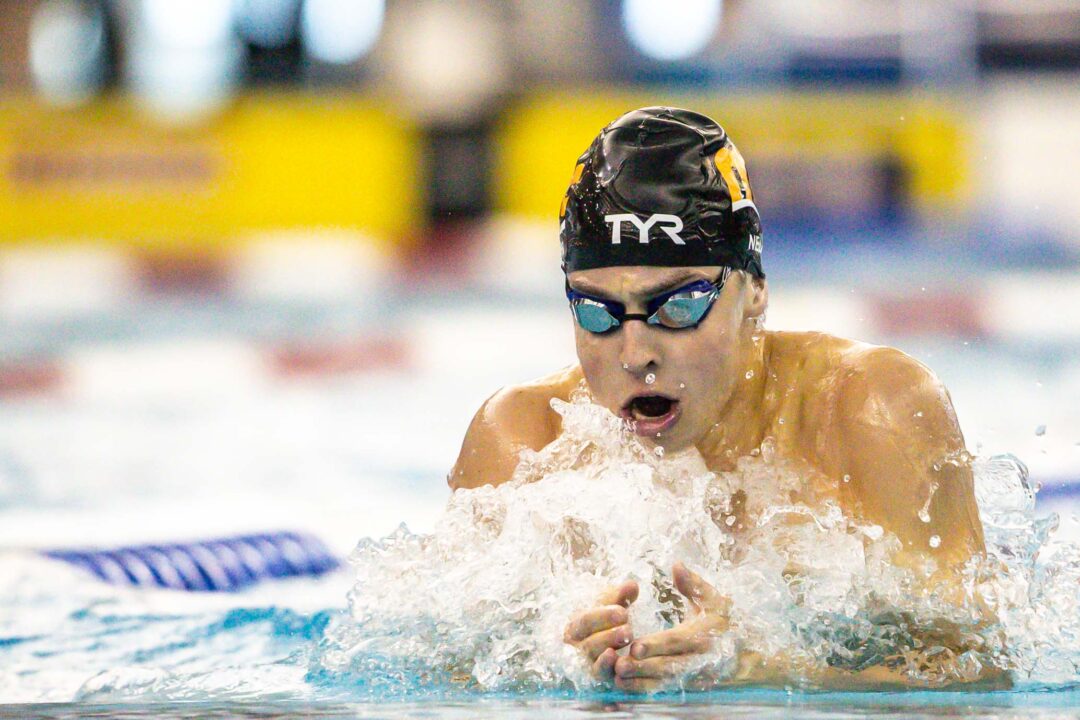 Nelson became the seventh-fastest under-20 swimmer ever in the NCAA after clocking 3:38.39 at the Art Adamson Invite on Thursday. Archive photo via Jack Spitser/Spitser Photography

Competing in the first taper meet of his collegiate career, Texas A&M freshman Baylor Nelson has been on fire through the first two days of competition at the Art Adamson Invitational.

After winning his primary event, the 200 IM, on Wednesday night in a new best time of 1:41.83, Nelson delivered a monstrous performance in the final of the 400 IM on Thursday, taking off over three seconds to touch in a blistering 3:38.39.

In a head-to-head battle with senior teammate Anze Fers Erzen, Nelson used a strong freestyle leg to take over the lead and ultimately touch first by nearly seven-tenths of a second, going well under his previous best time of 3:41.59.

Compared to his old best, set this past March at the TNAQ Speedo Southern Premier, Nelson was significantly faster on the back half.

Nelson’s time would’ve been sixth in the NCAA final last season, and ranks him 25th all-time in NCAA history while also putting him among the fastest-ever freshmen.

While a definitive list of freshmen is difficult to nail down, the 19-year-old appears to be the seven-fastest swimmer under 20 in the NCAA, and the eighth-fastest under 20 ever, according to USA Swimming’s database. The only name in between is Andrew Seliskar, who was 3:37.52 as an 18-year-old in club and had the fastest swim of his freshman year at Cal come in at 3:39.06.

The fastest freshman ever is Arizona State’s Leon Marchand, who went 3:34.08 at last season’s NCAAs, while Texas’ Carson Foster sits second after going 3:35.27 in October 2020.

Additionally, dating back to 2011-12, only Kalisz, Jay Litherland, Foster, Shaine Casas and Marchand have been faster than Nelson through mid-season invites.

Nelson happens to be entering his NCAA career with the world’s two best medley swimmers, Marchand and Foster, still competing. Gauging himself against those two names at NCAAs later this season will be a good test as he continues to progress up the ranks, and given the gains he’s made in just a few short months in College Station, he’ll be one to watch in March.

Did A&M get moved to Tennessee?

“Gauging himself against those two names at NCAAs later this season will be a good test as he continues to progress up the ranks, and given the gains he’s made in just a few short months in Knoxville, he’ll be one to watch in March.”

I’m in love with Baylor Nelson