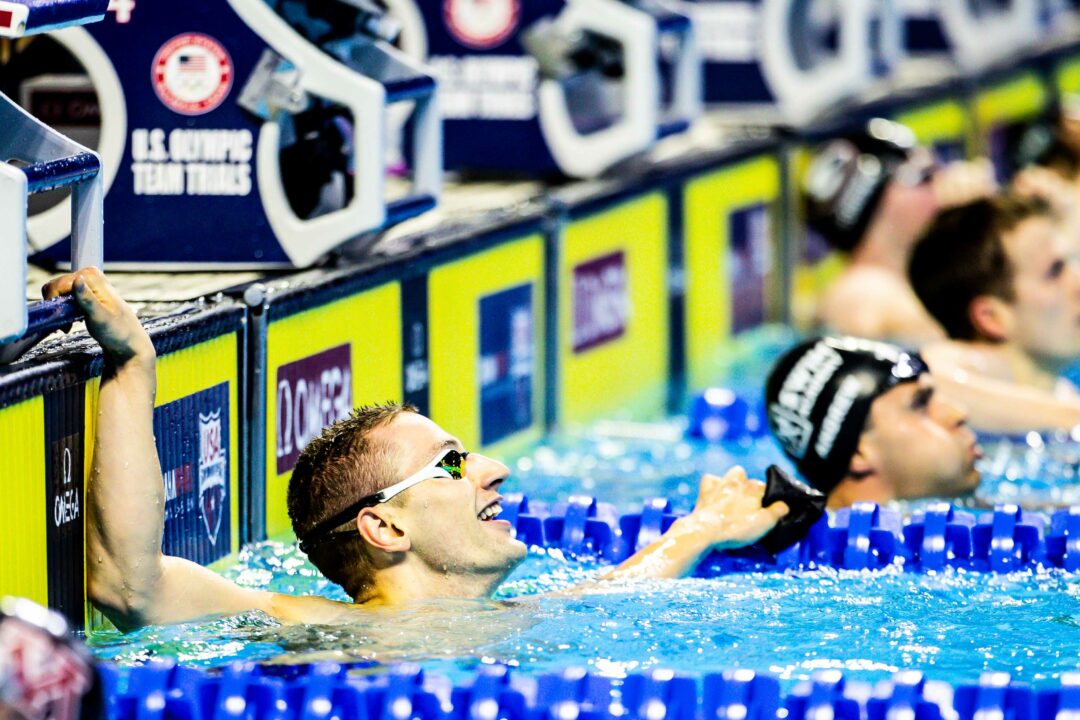 Wilson becomes the first NCAA Division III athlete to become an American Olympian in swimming by hitting a new PB of 58.74 for 2nd place Current photo via Jack Spitser/Spitser Photography

Michael Andrew got it done.

It wasn’t nearly as fast as the prelims or semis, and boy did it get close at the end, but Andrew is officially an Olympian after edging out Andrew Wilson and Nic Fink to win the men’s 100 breaststroke in a time of 58.73.

Andrew, who lowered the American Record twice on Sunday, bringing the mark all the way down to 58.14 in the semi-finals, was out just a tad slower than last night at the 50 in 26.90, but began tightening up coming down the stretch as Wilson and Fink smelled blood.

Wilson’s time marks a new PB, making him the 15th-fastest man in the history of the event, and he also becomes the first NCAA Division III athlete to become an American Olympian in swimming.

A BIG Shout out to Jon Howell at Emory for seeing a diamond in the rough when Andrew was a 59 breastroker in High School and developing him into a World Class swimmer!!

No wonder he goes to Oxford. So intelligent and coherent, wishing him all the best.

Going to be Crazy him being at Oxford. I’m well connected to that team so will be interested in how much he gets involved with BUCS events and even just society socials sinces hes basically completed the sport he competes in 😂

I can respect the “whatever happens, this is it” mentality. I love seeing Grevers and co. still hanging with the young swimmers and I think it’s great that long pro careers are becoming more viable, but I also believe in having an exit strategy and remembering that swimming doesn’t have to be your whole life.

Interesting. Breaststroke is so very different than other swim strokes. Teams that rarely produce national or international level swimmers are more likely to find and develop breaststrokers. It’s so much more like land sports that non-swimming specific dryland and short bursts of sprinting seem the way to have breaststrokers develop. More than any other event, the 100 breast seems to need the most specific training and swimmers are more individual in rhythm and stroke strengths. So our two 100 breaststrokers are USRPT and div III this time. We have something to learn from that as we do from the rare single event swimmers Adam Peatty.

Peaty went 2:08 low in the 200 in 2015. I think he just doesn’t care to train for it and wants to focus on being dominant in the 50 and 100. He could easily be a three-distance breaststroker if he wanted to be.

Agreed. Look at Kamminga, he has the times that day you can do all three if you want to, which is sort of a departure from the last decade or so, where you didn’t see the sprint breaststrokers doing well in the 200 and vice versa

I want Licon and Fink.