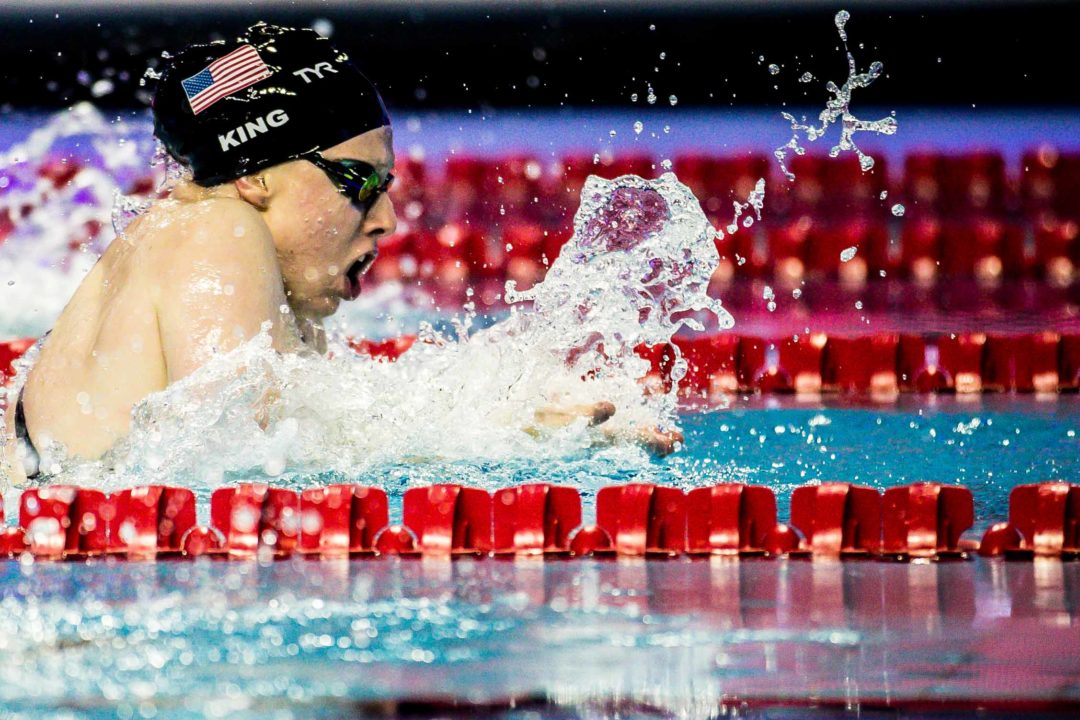 The U.S. leads the medal table in Gwangju through day 3, but the nation holds half the number of medals earned through this same time back in 2017. Archive photo via Jack Spitser/Spitser Photography

Whereas yesterday the Americans shared the top of the medal standings with the nation of Australias, holding 2 golds and 5 total medals apiece, day 3 saw the U.S. take the edge. With Lilly King‘s gold medal in the women’s 100m breaststroke, the stars n’ stripes now own 7 medals, as does Australia, but the former has 3 golds in all.

Canada remains among the top 5, as does Great Britain, who saw Duncan Scott pull out a 200m free bronze, tied with Russia’s Martin Malyutin, after the disqualification of Danas Rapsys of Lithuania.

However, the U.S. historically has been able to depend on a medal in the men’s 100m back and the nation came up short, with Ryan Murphy settling for 4th place, just .01 off the podium. Additionally, with Katie Ledecky‘s unexpected withdrawal from both the 200m free heats and the 1500m final, the 2 medals she most likely would have garnered fell or will fall to other nations’ columns.

Through day 3 at the 2017 World Championships, the Americans held a huge lead in the medal table, having already snagged 14 medals in all. This time around, that figure is cut in half, with the U.S. having racked up 7 thus far.

On day 3 back in Budapest, Townley Haas had taken silver, Ledecky earned gold in the 1500m and Kathleen Baker reaped silver in the 100m back 2 years ago. Matt Grevers and Murphy also finished 2-3 in the men’s 100m back, while now-retired Katie Meili finished behind King in Budapest for 100m breast silver.

This medal table is stunning to me. Where’s France? Netherlands? Denmark? New Zealand? Norway? How about Ireland, Spain, Ukraine and Austria? Notwithstanding Rikako Ikee, I thought Japan would be trending upward as we approach 2020 instead of going the other way. What’s happening to these programs?