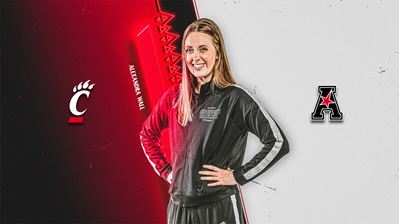 Wall graduated from UC this past spring and has spearheaded numerous community services activities for the Bearcats. Current photo via Cincinnati Athletics

University of Cincinnati swimming student-athlete Alexandra Wall has been given the American Athletic Conference’s Community Impact Award, as announced by the conference office on Friday.

The award, which is in its second year, recognizes an AAC student-athlete who has made an impact in the surrounding community or campus through service work. One student-athlete from each member school is eligible for the nomination each year.

Wall graduated from UC this past spring and has spearheaded numerous community services activities for the Bearcats. She started a Relay for Life team to benefit the American Cancer Society, set up a relationship with the Ronald McDonald House of Cincinnati, Cincinnati Children’s Hospital Medical Center, The Miracle League, Good Samaritan Hospital, FreeStore Foodbank and numerous elementary schools in the Cincinnati area. Individually, Wall volunteered in the emergency department and the Neonatal Intensive Care Unit at Good Samaritan Hospital. After completing general tasks as a volunteer in the emergency department, Wall aided in the open area NICU ward by securing medical supplies for infants, doing laundry, folding infant clothes and teaching new families how to properly scrub before entering the NICU.

In the pool, Wall is a four-time AAC All-Academic Team member. After helping so many others, she battled her own cancer diagnosis during Fall 2019 and worked back to swim in her senior day meet this past January. Wall is a Cincinnati native.