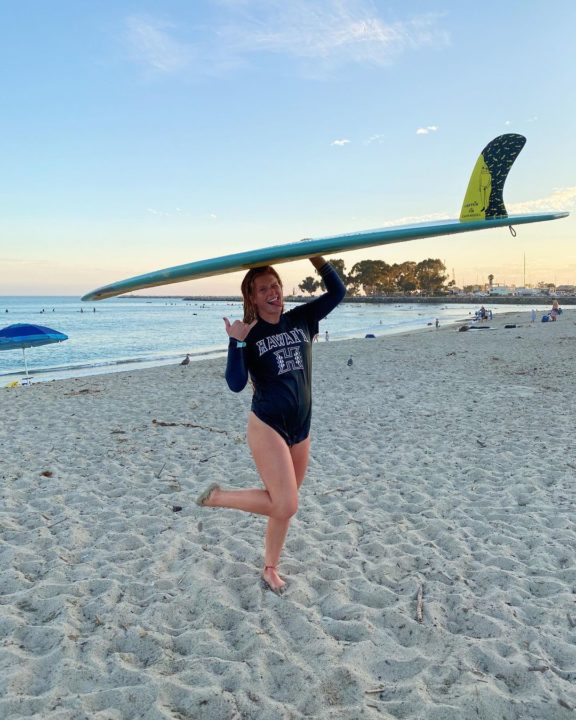 Samantha Nickell was supposed to attend Boise State this fall, but has instead has landed on the roster of the Hawaii Rainbow Wahine.

Samantha Nickell was due to begin her collegiate career this fall at Boise State University, but after that school cut its women’s swimming & diving program over the summer, she’s now landed at the University of Hawaii, Manoa instead.

I am beyond excited to announce my commitment to the University of Hawai’i to further my academic as well as athletic careers. Even with a saddened heart after the loss of the swim and dive program at BSU, I am more than grateful for the opportunities that the Hawai’i coaches have already given me to be able to continue my career in the sport that I love. I can’t wait to see what paradise has in store! 🤙🏻#skobows🌈

Primarily a backstroker and IMer, as a junior, she qualified for the California High School State Championship meet before that event was canceled during her senior year because of the ongoing coronavirus pandemic.

At that state meet, she swam the 100 back and 200 IM, finishing 22nd and 35th, respectively. The previous week she had been runner-up in the 200 IM and third in the 100 back at the 2019 CIF-Southern Section Division II Championships.

While Nickell didn’t get the chance to improve her two top high school-schedule events, the 100 back and 200 IM, at the end of her senior season, she did see improvements in several other events that will add to her versatility for Hawaii.

The Rainbow Wahine won their 4th-consecutive MPSF Conference Championship last season. That included a sweep of the backstroke events, Nickell’s best stroke, by then-junior Karolina Haljkova, and a 1-2 finish in the 200 backstroke.

Hawaii, who had 5 of the top 12 finishers in that 200 back at the MPSF Championships, will get even deeper with the addition of Nickell, whose best time is already fast enough to have qualified her for the A final last season.

While the 200 fly/200 back double is touch, her 200 fly time would have put her 5th at last year’s MPSF Championships. That’s actually an area where Hawaii needs a lot more help after not having any swimmers in the A, B, or C finals last season, so at least as a freshman, we could see her swim that 200 fly instead.

I wish my program got cut so I could go to Hawaii!