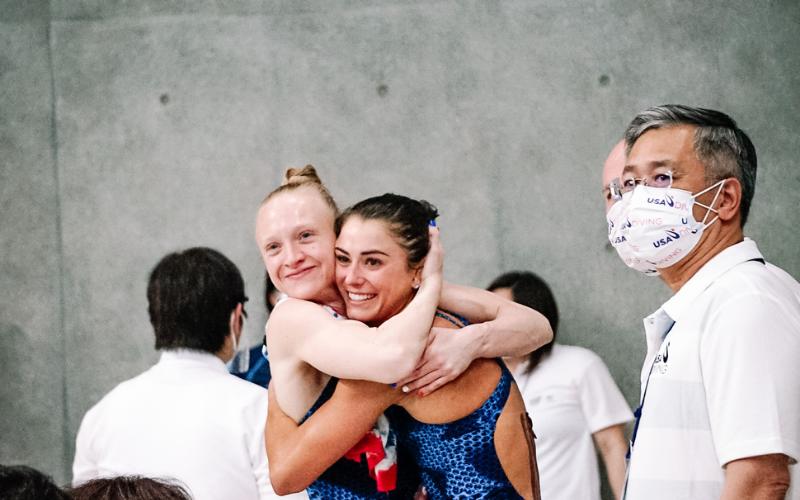 Sarah Bacon and Kassidy Cook (above) become the 8th quota spot filled by the Americans for diving at the Toyo 2020 Olympics out of a possible 12. Current photo via USA Diving

16 new Olympic tickets were stamped on Saturday on the opening day of the FINA Diving World Cup in Tokyo, Japan.

In each synchro event, the top 3 from last summer’s World Championships, plus the automatic qualifiers from the host country Japan, are already qualified. The 4 best finishing teams this week who were not already qualified earn their spot as well to make up an 8 team field for this summer’s Olympic Games.

The women’s 3-meter event was won by China’s Yani Chang and Yiwen Chen, finishing a dominating 28 points ahead of the field. China was already qualified for the Olympics in this event via their World Championship in 2019, though that event’s winners Shi Tingmao and Wang Han didn’t dive on Saturday.

China is the only country that maxed out its 12 quota spots at the World Championships.

That left the 3rd, 4th, 5th, and 6th place teams with new Olympic spots in the event.

Women’s 3-Meter New Qualifiers (Names of divers who competed on Saturday, not necessarily who countries will swim):

There were a few surprising results in that event. In what was a very-tight spread from 3rd through 8th, the Russian pair of Kristina Ilinykh and Mariia Poliakova, who were 4th at the World Championships and missed medaling by just 2 points, are out of the Olympics.

Meanwhile, in the men’s 10-meter, it was British pair Tom Daley and Matthew Lee who dominated the field, scoring a monstrous 453.60 to win by almost 50 points.

That pair finished 3rd at the 2019 World Championships, but without China and with another Russian pair, the defending silver medalists, struggling, the Brits were able to dominate the event.

The German pair of Patrick Hausding and Timo Barthel finished 6th, missing Olympic qualification by just 1.29 points. For Korea, who finished a place ahead, this is just their 3rd Olympic quota spot for Tokyo.

AM I MIS-READING THIS, OR IT WASN’T SUCH A GREAT DAY FOR TEAM USA?

Wow – Sarah Bacon is having quite a month. Swept the springboard at NCAA, won the Honda Award, and now captures an Olympic spot. Awe inspiring to say the least. Congratulations!

Outstanding year for Sarah but she didn’t get the Olympic spot, USA got it.