7 Storylines to Watch for in Match 7 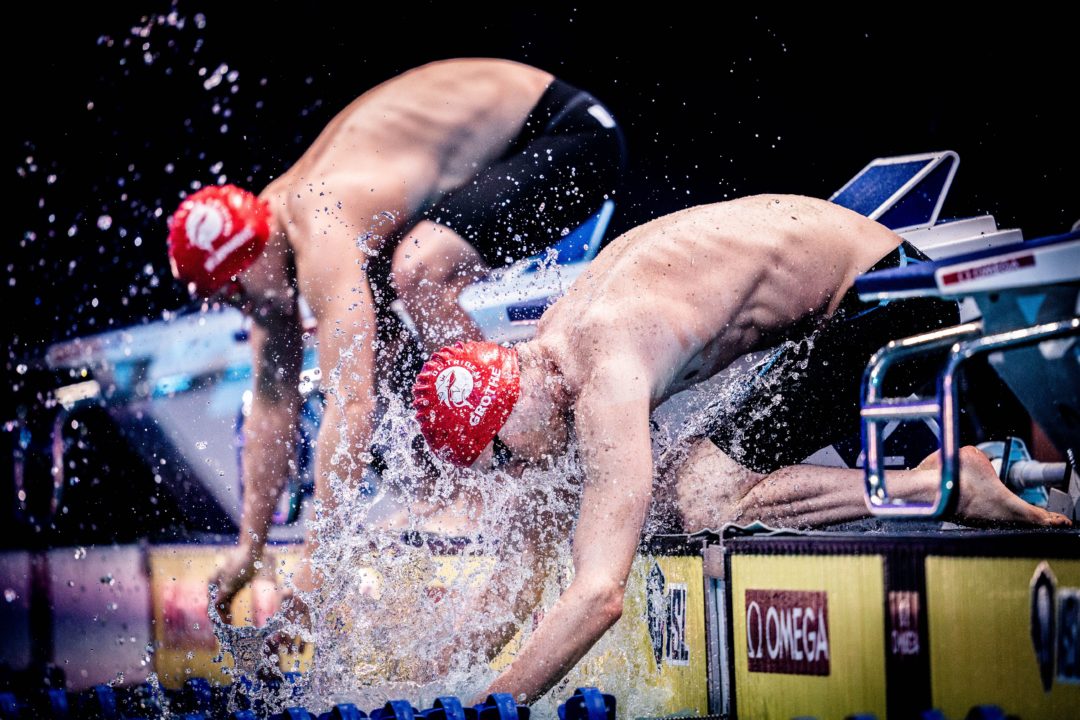 This will decide if DC Trident has a chance to advance to the semifinals. If they can snag 3rd place in match 7, their final regular-season match, they do. Current photo via Mine Kasapoglu

1. DC Trident Needs to Get 3rd

In the ISL, each team competes in 4 regular season meets and then the top 8 teams advance to the semifinals. DC Trident is entering their 4th and final regular season meet, while the other 3 teams in match 7 are only entering their 3rd. Looking at the league standings, DC Trident would have to place 3rd in this match in order to move onto the semifinals. This is possible if the New York Breakers place last in their 4th match, which would mean they end the regular season with 6 points. Currently, DC Trident has 4 league standing points going into their final match so they need 2 points, a 3rd place finish, to tie for 8th place otherwise their ISL season is over.

We don’t yet know what the tie-breakers are.

Energy Standard’s level of depth means match 7 is shaping up to be a close race for 2nd place between Iron and the Toronto Titans, but not for 1st place. Luckily, DC Trident only needs to beat one team in order to have a chance at getting into the semifinals, but it will be a close battle.

Team Iron’s Emre Sakci holds the ISL record in the 50 breast, and is clearly the event favorite. He may have a tight race with Shymanovich and Felipe Lima (ENS) may also be in the mix.

London Roar head coach Mel Marshall has called out ISL swimmers for doing an illegal dolphin kick on their breastroke pullout, including Shymanovich. Will we see cleaner swims from him, or will the officials take any action?

Iron’s Ranomi Kromowidjojo has dominated the 50 free this entire ISL season. The ISL record-holder would normally have to race Sarah Sjostrom (ENS), but Sjostrom sat out of match 6 due to “slight back issues.” It has not been confirmed whether she will race in match 7 or not.

Siobhan Haughey (ENS) is the favorite in the 100 free, as she holds the top time of the season. Sjostrom is ranked 2nd, again if she swims, and Kromowidjojo holds the 5th fastest time this season.

The 50 fly is shaping up to be an impressive battle, if not for 1st place then for 2nd. Kromowidjojo holds the ISL record in this event as well (24.74), but her teammate Melanie Henique is not far behind (24.96) and Energy Standard’s Madeline Banic is a mere .01 slower (24.97). Banic stepped up in a big way for her team in match 6, filling Sjostrom’s spot in the 50 and 100 fly events, winning the 50 and posting a time faster than Sjostrom has swam so far this ISL season. Her teammate Anastasiya Shkurdai also filled in for Sjostrom in the 100 fly, won the event, and posted the fastest ISL 100 fly time so far.

The 50 free is rarely predictable, but Energy Standard’s Florent Manaudou holds the fastest time in the ISL season so far. His biggest competition may be Maxim Lobanovskij (IRO) whose fastest time this season places him only .37 seconds behind Manaudou.

DC Trident’s Zach Apple has been a phenomenal asset for the Trident relays from the beginning. In match 2 he split a 45.15 on the anchor leg of the 4 x 100 free relay, which was over a second faster than anyone’s 4 x 100 free relay split in match 1 or 2. Individually, he holds the fastest 100 free time of this ISL season. In match 7 he has the chance to race 2 other top-5 swimmers in the event: Manaudou and Blake Pieroni (TOR.)

Lisa Bratton (TOR) and Amy Bilquist (DCT) are the top 2 swimmers this season in the 200 back with Kylie Masse (TOR) close behind in 4th place. We have the chance to see all 3 of them battle it out this weekend.

Masse is the top match 7 swimmer in the 50 back, but only by .11 seconds. DC Trident’s Linnea Mack is right on her toes and has a chance to score big points for her team here. The 100 looks to be Masse’s event to take despite Emily Seebohm (ENS) whose fastest time is .58 behind Masse’s fastest 100 back this season.

Danas Rapsys (ENS) holds ISL record in the 400 free and won the event last match by a comfortable margin. But, in match 7 he may face DC Trident’s Zane Grothe who is less than 4 seconds behind him. Grothe has a good chance to, if not win, close the gap between Rapsys and himself and avoid getting jackpotted in any way. Toronto’s Aleksandr Krasnykh will also be close behind Grothe.

On the women’s side, Haughey has swam the 2nd fastest 400 free during this ISL Season, beating Cali Condor Hali Flickinger in match 1. Haughey should dominate the 400 in this match, but she will have a closer race in the 200 free with Rebecca Smith (TOR), and Femke Heemskerk (ENS.)

5. Races to Watch for Potential Jackpots

In match 7, there are a few events that appear to have one or two top swimmers who have swam significantly faster than everyone else entered in the match. This could have big consequences with the “jackpot” rule. If a swimmer wins their event by a significant margin, they can steal or “jackpot” the points of the swimmers who finish behind them. Here are some races that stand out as potential jackpot swims on paper:

Although we’ve seen the largest ISL jackpot steal (21 points by Marco Koch) in a 200 breast, SwimSwam’s Barry Revzin calculated that jackpot points play a surprisingly large role in the shorter events too. So far this season, 92.5% of the 50’s races earned at least 1 jackpot point. 2 / 5  of those 50s events have jackpotted at least 4 points, meaning points were stolen from 3 swimmers…in a 50! This may widen leads created by match 7 star sprinters Pilato, Kromowidjojo, Santos, and Ryan.

6. Men’s 400IM Will Be an Iron and Energy Standard Show

3 out of the 5 fastest 400 IM’s this ISL season have been swam by Iron and Energy Standard swimmers: David Verraszto (IRO), Max Litchfield (ENS), and Max Stupin (ENS), in that order.  At their fastest, all 3 of them are less than 2 seconds apart. We have a chance to see 3 of the top 400IM’ers go head-to-head for the first time in match 7. However, Litchfield sat out of match 6 and it has not been confirmed whether he will compete in this match or not.

This race could be extremely close between Toronto and Energy Standard. The fastest women’s 400 medley relays so far (with match 7 teams in bold) have been:

Toronto, having this season’s top 50 backstroker in the match Kylie Masse will most likely pick backstroke. The problem with that in match 7 is DC Trident’s Linnea Mack who is just .11 behind her in the 50 back. Freestyle is out of the question (Kromowidjojo) as is breast (Pilato), and fly is risky (Banic, Sjostrom.)

Energy Standard has some options if they win. So far only Lily King has been able to beat Pilatto in a 50 breast so that seems to be the safest move. They could also trust Banic to perform well in a 50 fly skins race.

Energy Standard is the favorite for the men’s 4 x 100 medley relay. The fastest men’s 400 medley relays so far (with match 7 teams in bold) have been:

On the men’s side Energy Standard still has some options. Manaudou and Le Clos could tag-team a 50 fly skins race. Manaudou also holds the fastest 50 free time this season, making freestyle a possible choice. If they wanted to take a risk, ENS could also pick breast and hope Shymanovich, who has swam the 2nd fastest 50 breast this season, can outlast this season’s fastest 50 breast swimmer Sakci (IRO.) Backstroke is not a safe idea with Toronto’s Shane Ryan in the mix.

They’e the NY Breakers of the ISL.

Any new info on whether or not Sjostrom swims tomorrow?

Brandonn is from NYB doesn’t he?

Haughey is not the ISL record holder in the 400 free, that’s Katie ledecky

She’s not even fastest this year, Marghalis was 0.15 quicker.

This would be the best. For Iron. More points, and some jackpot points.

8.) Which poor sucker will have to be up at 4AM EST to recap this meet?

That would be myself and Annika! Swimming > Sleep