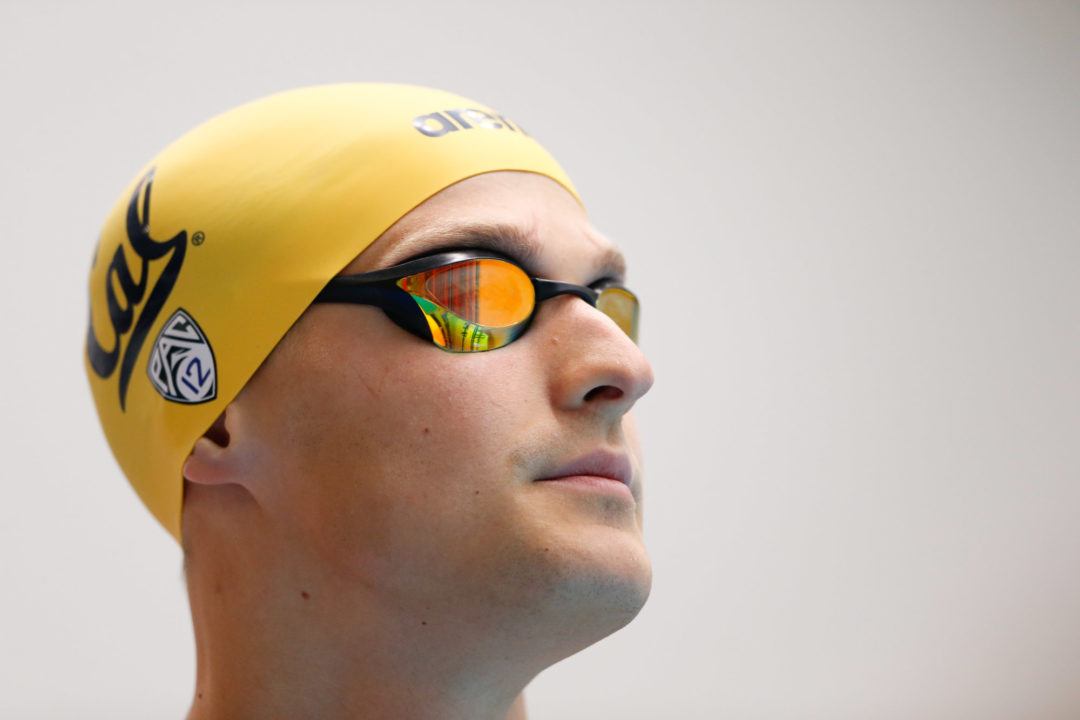 Here are some simple strategies any swimmer can use today in practice to unlock a high-performance mindset in training and competition. Current photo via Tim Binning/TheSwimPictures.com

Which is usually the last thing swimmers (or coaches) have at their disposal.

For most swimmers, their first thought about mental training runs along the lines of:

Mental training? Sure, whatever, pal—I just don’t want to crumple like a bag of potato chips when I get up on the block, how about that?

And to them I say, fair enough!

Here are five super simple things they (you?) can do starting today at practice to unlock a high-octane mindset:

1. Write out positive self-talk on the water bottle.

Self-talk is a hard skill to teach, simply because you can’t always see how well it’s being implemented.

Unlike technique, which is easier to view and diagnose, it can be a guessing game as to what kind of self-talk swimmers use when in the water.

The effects of bad self-talk are quite apparent, however: you see it in the swimmer whose shoulders sag in the face of adversity, who slow down when losing to a teammate, or who have difficulty bouncing back after a bad race.

Better self-talk starts with being more intentional. It starts with choosing what kind of self-talk helps swimmers rock out in the water.

And one way to do this is to write down better self-talk or a mantra somewhere that is nice and visible.

A group of researchers took a team of age group swimmers and had half of them perform a 10-week self-talk program that included having their positive self-talk written down at the end of their lane.

Sometimes all it takes is to look up and see “You can do this” or “One more rep” on the water bottle to remind a swimmer that they are more capable than they give themselves credit for.

2. Five minutes of visualization before practice.

This is one of my favorite mental training tools for the fact that there’s not much of a learning curve required, and it can be done just about anytime, anywhere.

The premise is simple…

Carve out five minutes before practice and have your swimmers visualize themselves swimming like a total boss.

You can guide them through it, coaching them to think about their mental state behind the blocks, how quickly they explode off the blocks, that feeling of crisp, easy speed.

Having done this consistently over the years I can attest to its effectiveness.

The visualization gives them a benchmark for how they want to feel in the water, gives them some moments of quite mindfulness training, and will even help them be more focused in practice.

Because our brains have difficulty distinguishing between real and perceived experiences your swimmers will be—in a limited sense—getting more race pace work in without getting crushed physically.

(This exercise can be incorporated within your workout as well. When researchers had elite track athletes perform a quick visualization 1-2 minutes before a sprint effort they significantly out-performed the control group and the group that used traditional psych-up talk.)

3. Ask them to write out what their emotional state was like before their perfect race.

Most swimmers prefer the white-knuckle approach when it comes to being mentally prepared to swim fast.

Which is kind of odd: if swimmers spent as much time researching supplements, tech suits or the best type of goggles as they did with their mental approach they’d be hilariously more consistent.

And committing a grand hack on the mindset starts with getting an understanding of what their emotional and mental state looks and feels like when they are rocking out in the pool.

Spending a few minutes writing out what their mental state was like before the times they have swum like total rock stars gives them a mental blueprint to work backwards from.

Swimmers usually don’t have a problem telling you what they want to achieve. It’s the whole “what are you going to do to achieve it” thing that gets in the way.

In other words, what is their process?

What are they going to do each day to make that big, greasy goal a reality?

What are the things that—if done consistently—would have the biggest impact on their swimming?

Have them bust out a piece of paper and write out 3-5 things that makes up their own process.

(Hint: Keep this list intentionally short. The temptation will be to write out a list of 25+ things they need to do to get better. Starting with only 3-5 will kickstart a chain of excellence that will eventually infect the rest of the things they can be improving on. In sum: Excellence is contagious.)

5. Ask them to write out a performance cue for the part of their race they struggle with the most. (Hulk smash!)

So simple, in fact, that their effectiveness can be easily masked. (We all want complicated answers, it seems.)

The way they work is straight-forward: You break your race down into sections and assign each a very short cue word or phrase.

They act as sort of a space launch checklist, allowing you to turn off your brain and just race.

Cues allow you to stay focused and not get distracted by what’s going on around you and can even help to keep technique from completely falling apart at the tail end of races.

Cues can be totally customized to the athlete, so have fun with them!

One of my favorite cues is, “Hulk smash!” for when a swimmer is 10m away from the finish. It’s a simple and effective reminder to bury their head and swim through the wall.

For max effectiveness have your swimmers use these cues in training to establish better habits so that it’s second nature when it comes to getting up on the blocks.

Mental training can seem like a deep and unending mess of work.

But it doesn’t have to be.

Keep it simple, keep it fun, and let the PBs roll!

My favorite cue: “Launch Control.” Perfect for when you need to floor it but not spin out 🙂