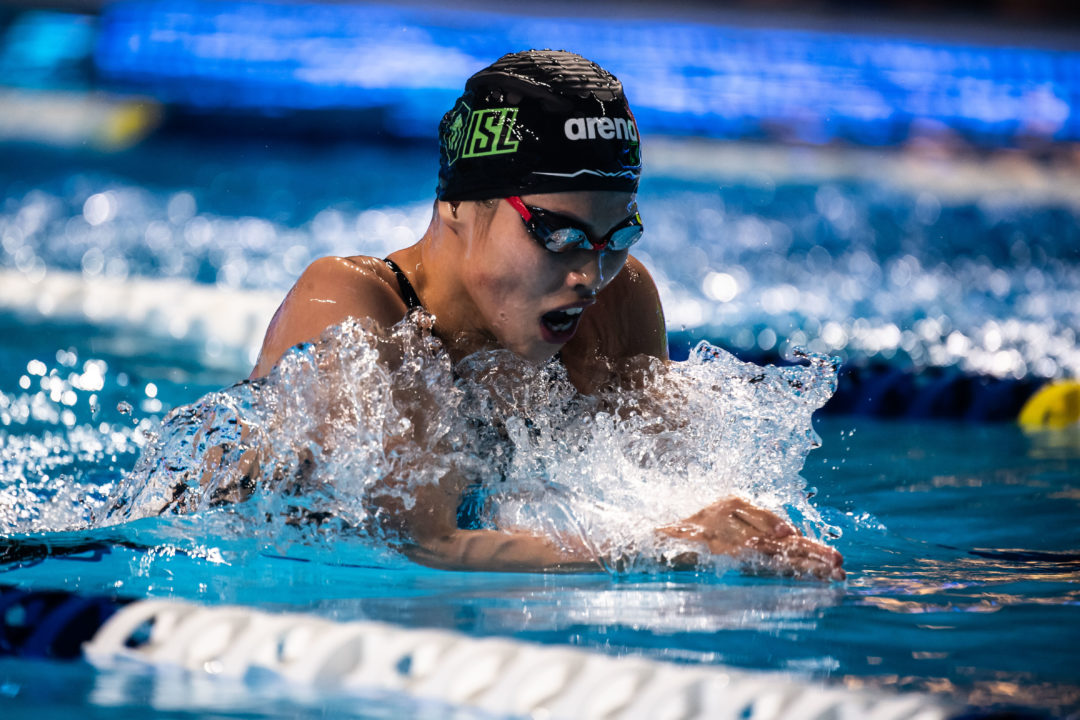 Today’s match sealed the deal for London as they hold onto their lead ahead of LA Current. The teams delivered some extremely fast swimming today again, so here’s 4 big storyline standouts from today:

Tom Shields has been one of the standout athletes during this ISL season so far. He began his season by causing major upset in the men’s 100m fly on Day 1 of Match 1, beating Caeleb Dressel with a time of 49.58.

Today he didn’t manage to take down Takeshi Kawamoto in the 50m butterfly, with the Tokyo swimmer grabbing the top spot in 22.38. In the individual 50, Shields went 22.47.

However, he responded to that second-place finish with a huge swim on the first 50 of the butterfly skins, setting a new lifetime best of 22.32, 0.06 better than his previous mark of 22.38 from the 2016 World Short Course Championships.

He continues to prove his worth for Current and has now got 3-for-3 wins in the 100m and 200m butterfly from all three matches he has raced. He also took away the MVP title for this match with 62.5 points, adding a $10,000 bonus onto his winnings.

It was an ISL first as 5 swimmers entered the second round of the skins race today on the women’s side after Annie Lazor and Anastasia Gorbenko tied for fourth place.

In round 1 breaststroke veteran Alia Atkinson was the only swimmer under the 30-second mark in 29.61. From there, she carried on this trend into round 2 by going 29.89 ahead of 2nd place finisher Gorbenko.

Ultimately though Atkinson came out on top, only narrowly holding off Gorbenko to win in 30.28, with the LA Current swimmer Gorbenko second in 30.38. Atkinson took home a monstrous 33 points for London Roar by winning all three rounds.

Suzuka Hasegawa and Sakiko Shimizu replicated their 1-2 finish in this event again just as they did on day 2 of Match #3. The Tokyo Frog Kings swimmers have proven to be huge assets for their team, and in this event alone delivered a combined 26 points on both occasions.

This is where jackpotting really comes into play, as both time Hasegawa stole the points from the bottom 4 finishers, meaning at least one team went away completely empty-handed (London Roar in #5 and Aqua Centurions in #3).

Shimizu also nabbed the win in the 200m breaststroke yesterday as she held off a determined Annie Lazor to win in 2:18.88, gathering another 9 points.

We saw a number of national records go down today, starting with a new French Record by Beryl Gastaldello in the 100m freestyle. She has been an absolute gun so far this season, and today was no different as she went 51.30 here, taking down Marie Wattel‘s mark of 51.45 which she set back in December last year.

New Zealand swimmer Helena Gasson continued her record-setting trend today by adding another under her belt today in the 400IM. The previous record of 4:34.05, set by Helen Norfolk, has stood since 2008. Today, Gasson posted 4:32.48 to smash that time and edge ever closer to the 4:30 mark.

She out-touched Roar’s Freya Anderson (who came back in a sizzling 27.79) for first place, with Anderson posting 1:54.66.

The previous record mark was also owned by Murez and stood at 1:54.67 from the year 2017. She has also broken the 100m freestyle National Record twice during her 2020 ISL tenure.

Is there a way to watch the ISA event from this morning? Couldn’t find it at 7am on CBSSN!

I think the best part of the ISL is that having new oppurtunities for fast SCM swimming means we see all kinds of records fall left and right- national records, junior records, regional records… etc. Didnt really see that before, I feel.