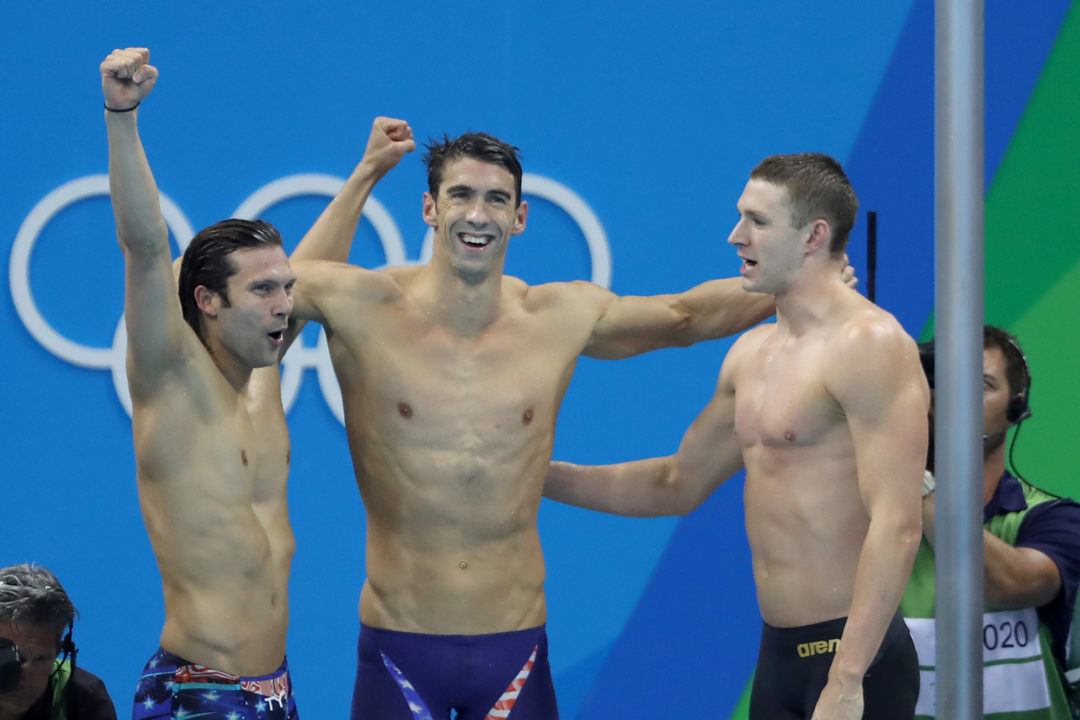 The 2017 ESPY Awards took place Wednesday night, and the sport of swimming had a phenomenal showing. The awards show, produced by the American broadcast company ESPN, honors the best from the last 12 months in sports. All in all swimmers received 10 nominations, with three wins.

Michael Phelps  came out on top for both ‘Best Record-breaking Performance‘ and ‘Best Male U.S. Olympic Athlete’. For Best Record-breaking performance, Phelps was recognized for extending his own record for most Olympic gold medals and most Olympic medals overall. Phelps won five gold and one silver medal at the 2016 Games in Rio, giving him a total of 23 gold and 28 medals in his historic career. He beat out Bill Belichick (most Superbowl wins as head coach), Diana Taurasi (broke WNBA career scoring record), and Russell Westbrook (most triple doubles in a season).

For Best Male U.S. Olympic Athlete, Phelps’ six medal performance got him the honor over teammate Ryan Murphy, who was nominated after winning three gold medals and setting a world record in his Olympic debut. Ashton Eaton (decathlon) and Kyle Snyder (wrestling) were also nominated.

Becca Meyers and her dog Birdie on the red carpet.

The third win came from Paralympian Becca Meyers, who won ‘Best Female Athlete with a Disability’. Competing in the S13 category, Meyers won three gold and one silver medal at the 2016 Paralympic games, winning gold in the 400 free, 100 fly and 200 IM.

Check out all swimmers nominated below:

You can check out the full list of winners and nominees here.

I have an idea about how to do this next time. First pick the best athlete, then pick someone else as the best US Olympic Athlete.

Simone Biles couldn’t even win Dancing With The Stars, so she isn’t that likable. Laurie Hernandez won it easily and that thing is just a popularity contest.

As formidable as Katie Ledecky is, and as popular as swimming is, Simone Biles is still much more popular as is female gymnastics, hence Simone winning best US Olympic athlete over Katie.

Even taking out the relative popularity of both sports, Biles is an all-time great gymnast. Not that Ledecky already isn’t a legendary swimmer in her own right, but it’s a legitimate toss-up to me.

I agree that they are both amazing athletes, but I think Ledecky should have won. Ledecky and Biles both have events where they were extremely dominant and guaranteed to win, for Ledecky, the 800, 400 and 4×200 relay, and for Biles, vault, floor, all around, and the team competition, and events where they had more competition,for Ledecky, the 200 free, and for Biles, beam. Given that Ledecky won the 200 and even anchored the silver medal winning 4×100 free relay, which I don’t think anyone saw coming, and Biles choked on beam and only got bronze, I think that Ledecky performed better overall in Rio.

Not saying Simone Biles isn’t a good gymnast, my point is that this is a popularity contest that Simone Biles has Katie Ledecky beat at. Compare their Instagram, Snapchat, Facebook, and Twitter. Also, Simone makes E! News from time to time. Now add that Simone was on dancing with the stars.

Yup, and I agree, Biles is more popular. I was addressing the two on merits outside of popularity and even there, it’s super close. They’re both really, really good.