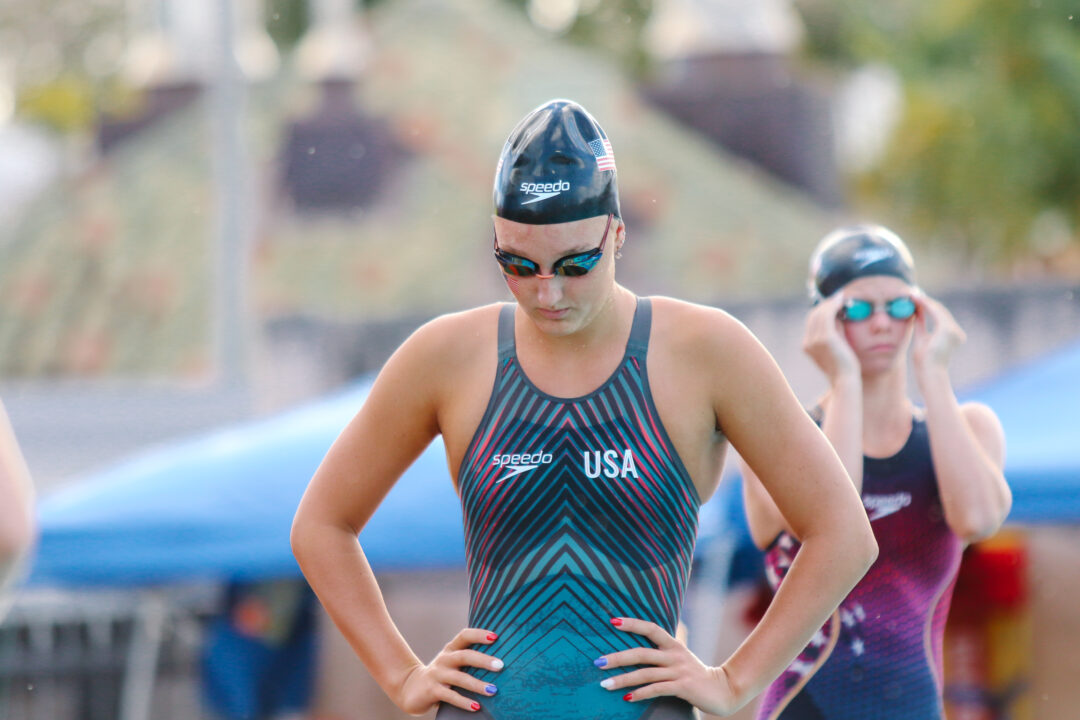 On a day full of blazing 500 frees from juniors, you may've missed Bailey Hartman cut 8 seconds off her best to finish 4th at Winter Juniors-West in 4:33.72. Archive photo via Jon Reiter

Swim fans were truly spoiled tonight. From the very first event in the East we were treated to a show, as Summer McIntosh dropped a blistering 4:27.52 for the #2 swim all-time. An hour later, Bella Sims and Katie Grimes joined her in cracking 4:30. In a virtual battle, Thomas Heilman got the better of Maximus Williamson, swimming 1:41.71 to break the boys’ 200 IM 15-16 NAG. The Shackell siblings are firing on all cylinders, as is Rex Maurer, and Erika Pelaez vaulted up the 15-16 girls’ all-time rankings in the 50 freestyle.

But that’s not what we’re here to talk about. Below, you’ll find a few of the swims that you might have missed while you were busy picking your jaw up off the floor watching how fast these juniors are swimming.

We now live in a world where a 4:33.72 doesn’t make the girls’ 500 freestyle podium at Winter Juniors. That’s the time that 16-year-old Bailey Hartman dropped at the West meet, finishing just off the podium behind the Sandpiper trio of Sims, Grimes, and Claire Weinstein.

It was an excellent swim for the Crow Canyon swimmer, who’s part of UVA’s incredibly deep group of 2024 commits. She came into the meet with a lifetime best of 4:41.73, swum in March 2022. In prelims, she broke 4:40 for the first time in 4:39.33 before shattering that time in finals. All told, she took over 8 seconds off her time over the day.

In March, she held 28s for the majority of her swim; in finals, she opened in 25.18 before holding 27s for the rest of the race. That paid off for her particularly in the middle part of the race. At Speedo Sectionals in March, her third 100 split was a 57.75. In finals at Winter Juniors, it was a 55.41.

Dillon Wright Cuts Over 13 Seconds off His 500 Free Best

The Sandpiper girls were undoubtedly the headline for the team tonight, but Dillon Wright had a strong swim of his own in the 500 freestyle. He won the ‘B’ final, finishing in 4:21.94, which would have put him fifth overall if he’d done it in the ‘A’ final.

He was able to drop again after taking off so much time in the morning thanks to his closing speed. He was already about a second ahead of his prelims pace heading into his last 100-yards. However in finals, he closed in 51.00 compared to 52.40, allowing him to create even more distance from his former self. He needed every bit of that closing speed too, as he was able to hold off a late charge from Dean Jones, who closed in 49.94, for the heat win.

Also winning a West meet ‘B’ final with a highlight swim was 17-year-old Liam Campbell. He dropped a 19.92, breaking 20 seconds in the 50 free for the first time in his career. He came into the meet with a lifetime best 20.34, then went 20.14 in prelims to get closer to the barrier.

In finals, he held his seed to win the heat, triumphing by .01 seconds over Daniel Li. Campbell is committed to join the University of Pennsylvania next fall. He’ll be a welcome addition to the Quakers’ team, as 19.92 would be the second-fastest time on their roster this season. The only person who’s been faster so far is junior Ben Feldman, who hit 19.93 at the Zippy Invitational last weekend.

Campbell is also slated to race the 100 back and 100 free this week, so we’l keep an eye on how his times there stack up with his soon-to-be school.

Heading east, 15-year-old Annie Jia had a fantastic swim in the girls’ 200 IM. She finished 10th in 1:58.60, cracking the 2:00 barrier for the first time. She almost got under in prelims, when she swam 2:00.04, but successfully hit the mark tonight, moving up one place from her finals seed.

From these splits, you can see that the major changes she made in finals were on the opening and closing legs of her race. She was only .19 seconds faster than her prelims self with 50-yards to go, but pushed on the freestyle leg, flying home in 27.85 compared to 29.07 in prelims. That’s a 1.22 second difference, and along with her .45 second drop on fly, is responsible for her new lifetime best.

15-year-old Avery Klamfoth threw down a speedy 1:00.34 breaststroke split for SwimMAC’s girls’ 4×100 medley ‘B’ relay. She might have been on their ‘B’ relay, but that stands up as the second fastest split in the field, behind only her teammate Grace Rainey, who split 59.93.

SwimMAC’s ‘B’ relay as a whole was impressive, with Klamfoth combining with Lauren Bernardo (56.35 back), Zetta Grace Bartee (54.09 fly), and Sofia Plaza (51.00 free) to finish fifth. The next fastest ‘B’ relay was the TAC Titans quartet, who finished 11th.

Klamfoth’s split should have you circling her name on tomorrow’s heat sheet. Her lifetime best stands at 1:01.66 from November 2022. Yes, she had a flying start, but her split is 1.32 seconds faster than that mark, so watch for what she can throw down in Day 3’s individual 100 breast.