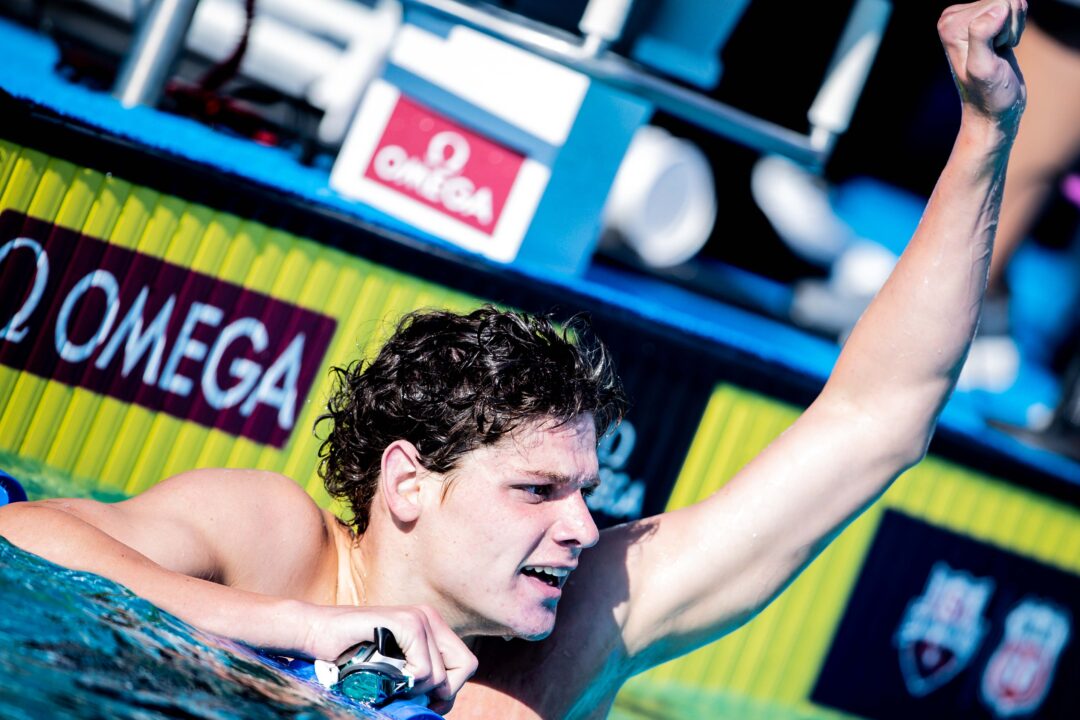 In Thursday’s race, Maurer was up against Texas swimmer Alec Enyeart and Texas commit Cooper Lucas, and the three swimmers traded leads throughout the beginning of the race. At the 200 mark, Maurer pulled ahead of the rest of the field and ended up winning by over a second.

As you can see from the splits below, Maurer improved primarily on his last 100, where he was 0.58 seconds faster than he was on Thursday compared to this May. He also saw drops in time on his first and fourth 100s.

Maurer, a Stanford commit, is the top-ranked distance swimmer in the high school class of 2023. He now has a time that would have made the ‘B’ final at the 2022 NCAA championships, and along with fellow 2023 Stanford commit Henry McFadden (who went 4:16.99 at the Winter Juniors east meet) they will be a strong 1-2 punch for the Cardinal.

Rumor has it this phenom is heavily considering changing his committment from lowly stanford to THE Case Western Reserve University. Attracted to the prestigious distance group coached by the one and only Michael Butler, sources say they saw young Rex go straight to Texas from Cleveland airport. Is it possible he was on an official visit? The world can only wait and watch.

Can confirm!!!! I was at the Cleveland Airport (I’m an uber driver on the weekends when I am not competing as a Division III athlete-student), and had the privilege of dropping off Mr. Maurer for his flight to Austin. I said “but sir, why would you be flying into Austin from Cleveland when you live in California?” Rex, smiling ear to ear, said “Why don’t you ask Coach Doug Milliken.” Let that sink in.

That boy with some creatine is the ultimate zest machine.

These are times that should be posted to Maurer’s wall. USMS 18-24 national records in the 500 free and 100 IM. The mark of greatness.

If he really wants to leave his mark on the sport…

To pull Luke, a yet to be named 31-71 year old female, and his mom, Leah, into the mix and help them achieve their dreams. Leah has done a lot in swimming, but never captured the illusive USMS title

Frankly, Rex should skip swimming NCAA entirely and focus solely on USMS. What is a mere 4-5 years of NCAA eligibility compared to a likely 60+ years of a USMS career when he can most likely rewrite the record book in almost every event in each age group?

I dunno about you, but putting all his eggs in the USMS basket is a no brainer to me.

He plays a game with which I am not familiar

What could Phelps have gone full shave taper in his prime if he trained for the 500 free?

who cares? rex is a beast

its like me saying what could ian thorpe do full shave taper circa 2002 if he did a 500 scy free? No one cares, not even me

This is a discussion board… don’t get too upset fanboy.

Gotta say, I was most surprised with the 100 back! Simply amazing!!! 🔥

Rex is momma’s boy, I guess