2022 US National Championships: Swims You Might Have Missed on Day 2 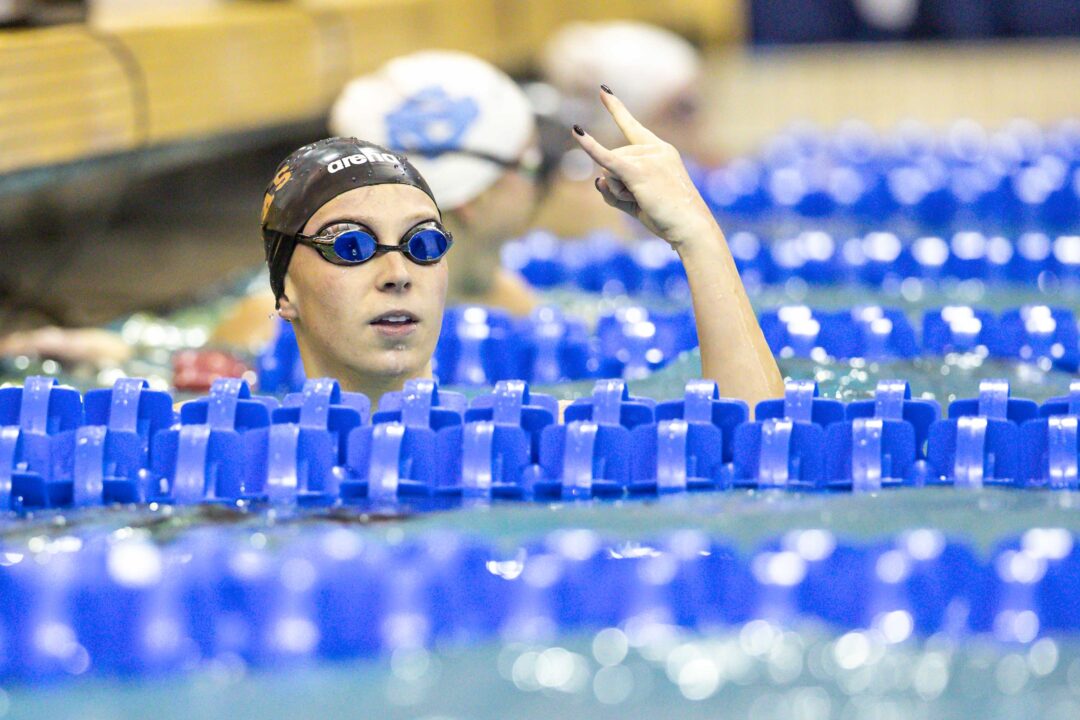 For the first time in 3 years, Olivia Bray set a lifetime best in the 200 back on day 2 of U.S Nats--one of several swims on the day you may have missed. Archive photo via Jack Spitser/Spitser Photography

There were plenty of big swims on day 2 finals of U.S Nationals, highlighted by Katie Ledecky’s 200 free and Matt Fallon‘s 200 breast. However, there were several swims that may have “slipped through the cracks” behind those performances. Here’s some of the top performances you may have missed on the day:

Olivia Bray Swims 2 Lifetime Bests in the 200 Back

At the start of the day, Olivia Bray held a lifetime best in the 200 back of 2:14.41, which she set at the 2019 Florida ISCA Junior Championships. Since then, Bray has been instrumental to the Longhorn women’s recent success and has also been open about seeking treatment for an eating disorder.

Georgia’s Zoie Hartman was all smiles after her win in the “B” final of the women’s 200 breast. That’s because she set a personal best in the event for the first time in five years. At 2017 Junior Nationals, Hartman clocked 2:28.06, a mark she’s been aiming for since. She finally got under that time on day 2 finals; she took over the lead of her heat at the 100 and never surrendered it, winning in 2:27.26.

Though Gabriel Jett chased him down to win the “B” Final, it was Patrick Sammon who led through the first 150 meters of the race. Sammon touched in 1:47.80, a best time by over half a second and the 12th fastest time by a 17-18 year old in U.S history. He moves up from 19th, passing swimmers such as Grant Shoults and Jake Magahey.

Sammon was one of two true freshmen to compete at NCAAs for ASU, and helped them to a fifth-place finish in the 800 free relay. On day 1, Sammon logged a lifetime best in the 100 free. If he can continue his momentum into the short course season, he’ll become an even more valuable asset to a fast-rising ASU team.

Making this list for the second day in a row, the UVA commit swam her second personal best in two days. On day 2, Zoe Skirboll cut over six-and-a-half seconds off her best time in the 200 breast. She ended the day with a 2:30.98, touching second in the “D” final and getting onto the Top 100 17-18 American girls in 79th.

17-year-old Matthew Lucky won the “D” final of the men’s 200 breast, reserved for boys 18 and under. He swam a new lifetime best of 2:15.72 to grab the win. Lucky will represent the U.S at Junior Pan Pacs in Honolulu, Hawaii in August. He’s one of 7 boys named to the JPP roster swimming in Irvine. As Junior Pan Pacs are still a month away, it’s likely that he’s not fully tapered for this meet, so it’s a great sign for him that he’s hitting a personal best here. Coming into the meet, Lucky held a best of 2:16.25, so he cut about half a second off his time.

Nathaniel Stoffle came in third in the “B” final, getting out-touched for second by Leon MacAlister, which is why this swim might have flown under your radar. Stoffle logged 1:59.70, breaking the 2 minute barrier for the first time in his career.

After a few quiet seasons, the 2021-2022 year was a turning point for the Auburn Tigers. Now, they’re continuing that success in long course, too. We highlighted them as one of the NCAA teams swimming well through the first day and a half of Nationals, and they only continued to build on their momentum during finals. Before today, Stoffle’s lifetime best was a 2:03.65 from the 2021 long course season.

Stoffle was not the only one in the field to get under 2 minutes for the first time: Nick Simons, Baylor Nelson, Caleb Maldari, Christopher O’Connor, Bradley Dunham, and Leon MacAlister all got under the threshold for the first time. Notably, Maldari, who finished 7th, is now the 28th fastest 17-18 year-old in U.S history.

Older brother and Stanford swimmer Luke Maurer won the “C” final of the 200 free in 1:49.24, winning a close race with Indiana’s Brendan Burns. Maurer shaved more time off the lifetime best 1:49.57 he went in prelims, clocking 1:49.24.

Not to be outdone, Rex Maurer stepped up and won the 18 and under final, touching in 1:49.49, getting under the 1:50 barrier for the first time. He won his heat by over half a second, beating out Sebastien Sergile. Along with Skirboll, Rex Maurer also makes our list for the second time in two days, highlighting the strong meet that he’s having so far.

These posts are so great. Really important for the sport to show some recognition to the up-and-coming talent.Congrats to all these swimmers on the fast times!

“Splits you may have missed”
What’s more impressive than Simons breaking 2:00 for the first time and being 11 all time was his closing speed of 29.02! He was in the weeds at the 150, was the fastest last 50 in the field by far, made up 2 seconds on Aikins, and ALMOST WON.

Sammon didn’t die nearly as badly as I expected. 28 isn’t horrible for a last 50 and second place in consols is fantastic. He just needs to calm down a bit and work on that pacing.