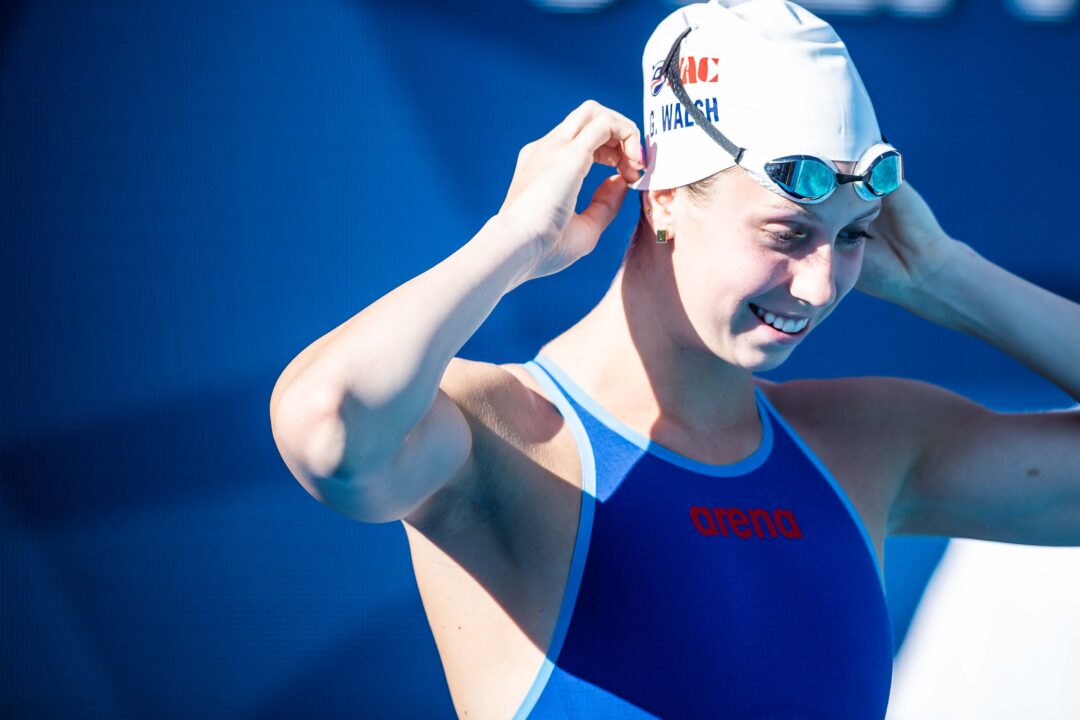 Gretchen Walsh of Virginia was second in the women's 100 free on night 1, swimming her fastest time in about three years. Current photo via Jack Spitser/Spitser Photography

With the NCAA season spanning from about September through the end of March, it was a tight turnaround for most teams from the NCAA Championships in mid-March for the women and the end of March for the men to either go back into training hard before taper again or continuing a taper until the 2022 US International Team Trials at the end of April. As usual, some teams perform better than others, but so far through day 2 prelims in Irvine, NCAA teams seem to be looking strong.

Note: This list is not a full extensive list of each college and each of their best times/swims. Instead, this list is a highlight of some of the top swims that have stood out so far.

Here are some of the teams standing out to SwimSwam through prelims of day 2:

Rising sophomore Mariah Denigan had a huge 11.67 second drop from her seed time in the women’s 800 free on day 1 swimming a 8:31.12. Denigan ended up finishing second even though she swam in the afternoon heats of the event. Her time here was the fastest since summer of 2018 where she swam times of 8:28.15 at Nationals and a 8:30.01 at Junior Pan Pacs.

Also standing out on the men’s side was rising sophomore Josh Matheny swimming a 2:10.19 in the men’s 200 breaststroke prelims session this morning. Matheny holds a best time of 2:09.40 from 2019 World Junior Champs. Since that swim though, he has been unable to sneak under the 2:11 mark like he did this morning. Matheny is the fourth seed heading into tonight’s final.

The women’s 200 breaststroke featured two Indiana swimmers swimming faster than their seed time. Mackenzie Looze swam a 2:27.49 dropping 0.11 off her seed time to be the top seed heading into tonight’s final. Noelle Peplowski dropped over two seconds to swim a 2:28.44 for the fifth seed heading into tonight’s final. Peplowski holds a best time of 2:29.48 from 2019 Summer Nationals but had been unable to dip under the 2:30 mark again until this morning. Notably, both women are already faster here than they were at US International Team Trials in April.

One of the biggest swims for Virginia was Matt King‘s 48.33 in prelims of the men’s 100 freestyle. King came in with a seed time of 48.87 which he swam less than two weeks ago. King went on to swim in finals where he swam a 48.44, tying with Zach Apple for the national title. In the last year, King has dropped over a second and a half in the event going from a 49.98 to a 48.33.

Another big swim for Virginia was Gretchen Walsh‘s 100 freestyle. Walsh swam a 54.77 in a practice suit in prelims before suiting up for finals swimming a 53.86 out of lane 1. Walsh ended up finishing second swimming her fastest time in three years. Her best time stands at a 53.74 from 2019 World Junior Champs. Her swim here was notably faster than her 55.57 that she swam at US International Team Trials in April.

Incoming freshman Claire Tuggle has also put on a show so far. Tuggle swam a 1:58.74 in the 200 free this morning to be the third seed heading into finals. That was her fastest time since 2019 Summer Nationals when she swam a 1:58.21.

Amy Fulmer has continued to drop time for the Buckeyes. On night 1, Fulmer swam a 54.57 100 freestyle to win the B final. Fulmer has now dropped almost a second in the event over the last year going from a 55.41 to a 54.57. Notably, Fulmer swam the event at International Team Trials swimming a 55.54.

Michael Bonson also had a huge swim with a 1:49.74. That was over three seconds faster than his best time of 1:52.79 from last summer and his fastest time since swimming a 1:51.86 back at 2019 Summer Junior Nationals.

In the women’s 800 freestyle, Kathryn Ackerman and Kathryn Shanley combined to drop over 15 seconds. Ackerman swam a 8:46.17 to finish 15th in the event. Shanley swam a 8:47.22, over nine seconds faster than her previous best of 8:56.72 which she swam in May of this year.

Rising fifth year Jared Daigle swam a 2:01.77 this morning in the men’s 200 back. That was much faster than his 2:03.95 which he swam in prelims at International Team Trials.

Could have sworn Mizzou has swimmers at this meet…

How about ASU?? Looney second in 2 fly, Matheson 4th in the mile, Kharun 2nd in the fly, Sammon C final champ in 100 free, Foelske C final champ in 2 fly… just on the first day. Certainly one of the top 4 teams so far

How about them Mustangs 🐎

Albiero is looking sharp. Stanford pretty hit/miss, their women look better than the men? Very surprised Minakov was so far off. NCST has had some good swims, one great one. Texas seems to be swimming pretty well, nothing insane, but solid.

Will be easier to gauge after tomorrow.

probably need more swims to judge some of the programs. The thing is that some teams just seem to have a lot of scy studs and are pretty meh in summer and then sometimes you have the opposite when some swimmer appears to swim way above their scy ability.

If you are only counting swimmers still at State / training in Raleigh I think the Pack did the mic drop and exited stage left with Willie G having the only swim and standing atop the podium. The European current-Wolfies (any beside Nyls, Kacper, Andrea…since Sophie is in the UK now?) have a high bar set for them next month.