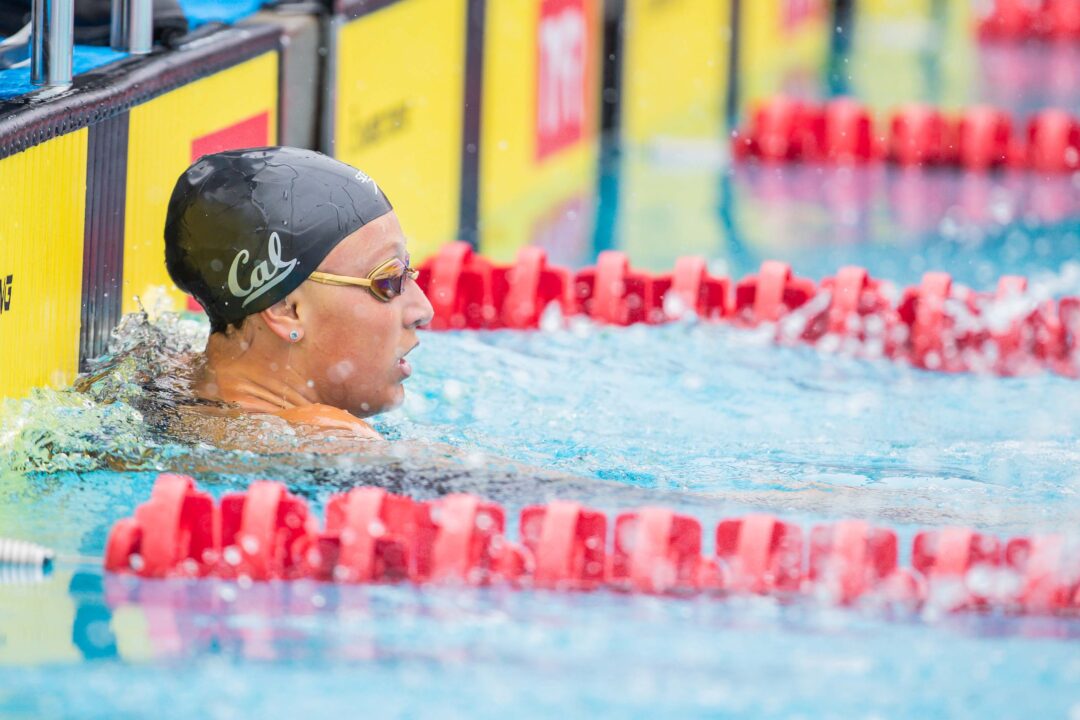 Isabelle Stadden reflected on her national title race along with the other event winners on Day 2 of the U.S National Championships. Archive photo via Jack Spitser/Spitser Photography

Day 2 of U.S Nationals is over, with new national champions crowned in the 200 free, 200 breast, and 200 back. Here’s what the winners had to say after their victories.

Winning her first national title in the 200 back, Cal’s Isabelle Stadden reflected that “it’s been a really long time coming with [that event] and I think it’s just been a mental block for me, but I’m really glad it ended up the way it did.” After falling behind Rhyan White at the 100-meter mark, Stadden regained the lead by the 150 and held on to win by .22 over White in 2:07.29, one-hundredth off her lifetime best.

Jack Aikins was also slightly off his personal best, but the first-time national title winner didn’t mind, saying “It wasn’t a best time, but I think that is largely in part to the fact that I just don’t have that much experience swimming outside. I was kind of bumping into the lane lines a little bit, but that’s ok because I had fun and that’s what really counts.”  Aikins also talked about his race strategy for the final, saying “this morning I was out really fast, and I definitely paid for it the second half of the race, so my goal this evening was to just control it a little better. I definitely feel like I did that, I wasn’t dying as much towards the end.”

Matt Fallon had a phenomenal race in the 200 breast, clocking 2:07.91 to become the 7th fastest American of all time. Fallon used his typical race strategy: he was eighth at the first 50 and worked his way through the field. It’s a strategy that requires nerves of steel, which Fallon touched on post-race. “I felt the nerves going into that first 100 definitely, but I’ve felt them before,” Fallon said. “I just tried to be as smooth as possible even when I’m not feeling 100% on that first 100. Because you know, the nerves can get to you, even when you aren’t thinking about it. After that, I really tried to improve from this morning, because this morning I was feeling kind of tight, a little rushed, I wasn’t pulling a lot of water. I really made sure to hold my line, really start pulling the water, and sort of build into the stroke rate from there. Rather than starting out with the stroke rate and just spinning to the wall, which is never good.”

Indiana’s Mackenzie Looze won the women’s 200 breast with the opposite strategy. “I’ve definitely been working on my strategy for that race for quite a long time. To be honest, it’s hard to realize how fast you have to go out with it. In 200s, you kind of want to take it out kind of easy. Lilly King – who is a good friend of mine – says ‘Just take it out and hope no one catches you.’ So – honestly – that was kind of the idea. Take it out with the field, push it the last 100 and see how it goes, and it went well so I’m really glad!” Looze crushed her previous lifetime best by two seconds, winning the title in 2:25.35. That time makes her the 25th fastest American woman all-time.

Katie Ledecky won the women’s 200 free in 1:54.50, coming within a tenth of Allison Schmitt‘s U.S Open Record. She admitted she was surprised by the time, saying “It felt good. I didn’t feel very sharp this morning so just wanted to try and turn it around, and I went a lot faster than I kind of expected after this morning, so I’m really pleased with how that went.”

Texas’ Luke Hobson is also a first time national champion, taking the win over Kieran Smith and Jake Magahey in the men’s 200 free. To win, he focused on his third 50. “Going in, I knew I wanted to take out that first 100 pretty smooth; really work on that third 50 and last and it worked out well. Had it coming home, and it felt great.” Hobson touched in 1:46.14, a new lifetime best.

Did the LLC guy coach her in the lead up to the meet or did Durden combine men and women?

I know you are trolling BigLouLLC , but he left and is now part of South Jersey Aquatics