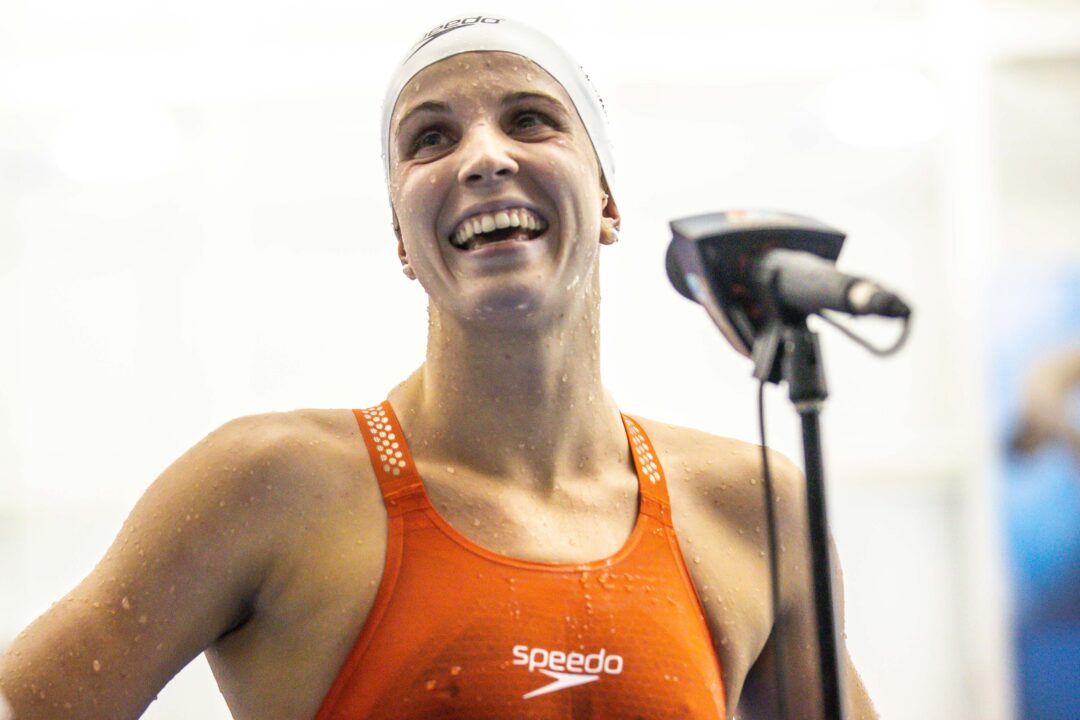 Regan Smith has been Team USA's top female backstroker since 2019, but the gap she once had over her American competition has narrowed. Current photo via Jack Spitser/Spitser Photography

Smith won the 100 backstroke at the U.S. Open in December, posting a strong 58.69, currently the 3rd-fastest time in the world and the fastest time by an American performer this season.

Smith ought to be the favorite to win the 100 backstroke in Greensboro, but it probably won’t be a blow-out. In fact, the women’s 100 backstroke should be one of the best races of the meet.

There is a degree of intrigue surrounding teen phenom Claire Curzan, who posted a 58.72 in the 100 backstroke in San Antonio in early April. Curzan also blasted a 49.25 in yards at the North Carolina high school state championships. However, Curzan will have a busy schedule and she didn’t swim the backstroke at the 2021 U.S. Trials. If Curzan decides to pursue the 100 backstroke, she will be in the mix for a spot on the team in the event. Currently, she is entered in the 50 and 100 butterfly, the 50, 100, and 200 backstroke, and the 50 and 100 freestyle. The 100 backstroke is near the end of the meet, so it’s hard to say whether Curzan keeps it or not.

Erika Brown is best known as a freestyle and butterfly specialist, but she is also a very capable backstroker. Brown is entered in the 100 backstroke, holding down the 9th seed, as well as the 50 back, where she is seeded 7th. Brown didn’t swim the backstroke at Olympic Trials in 2021, giving preference to the 100 butterfly, where she placed 32nd. Brown is entered in 5 events for Greensboro, including the 50, 100, and 200 freestyles, as well as the  50 and 100 backstrokes. Brown placed 2nd in the 100 freestyle at the 2021 Olympic Trials, as well as 8th in the 50 free. Brown is a true wild card in the backstroke, making this race even more fun.

Fresh off of wildly successful NCAA seasons, NC State’s Katharine Berkoff and Virginia’s Gretchen Walsh will are two more very exciting backstrokers to watch in Greensboro. At the NCAA Championships, both Berkoff and Walsh bested Smith in the 100 backstroke, clocking the two fastest performances ever with times of 48.74 and 49.00, respectively. At the 2021 U.S. Olympic Trials, Berkoff placed 4th in the 100 backstroke, while G. Walsh did not swim the race.

Both Berkoff and Walsh will be huge challengers to Smith. Berkoff won bronze in the 100 backstroke at the 2021 short course FINA World Championships in Abu Dhabi in December, clocking a time of 55.40, making her the 9th-fastest performer all-time and the 2nd-fastest American all-time in the race, behind Smoliga who holds the American Record at 55.04 from the 2020 ISL Final.

Not to be outdone by the ACC, the Pac-12 answers with another world-class talent in Isabelle Stadden. Stadden, like Smith, is from the greater Minneapolis area and grew up swimming for the Aquajets swim club, which also produced Rachel Bootsma, a 2012 Olympic gold medalist and 3-time NCAA champion in the 100 yard backstroke. Stadden placed 5th in the 100 backstroke at the Olympic Trials last summer, and has international experience from the 2019 Pan American Games where she won silver in the 200 back behind A. Walsh. More recently at the 2021 World Championships, Stadden won bronze in the 200 backstroke. Stadden was also 7th in the 100 back (50.81) and 4th in the 200 back (1:49.45) at the NCAA Championships. Though the 200 is her better event, she should be a lock for the final in the 100 as well.

Beata Nelson is one of the greatest short course yards competitors in American history, and has also made her mark on the history books in short course meters over the course of 3 ISL seasons. Nelson has been unable to make the transition to long course. For example, Nelson’s best yards time in the 100 backstroke is a 49.18, making her the 4th-fastest all-time in that race. In long course, however, Nelson’s lifetime best is a 1:00.92 from 2018.

Gabby DeLoof comes in as the 6th-seed with a best time of 1:00.44 from 2021. DeLoof should be in contention for a second swim, potentially slipping into the ‘A’ final, but with a field this loaded, she’s probably going to have to get that best time under a minute to secure a spot among the top-8.

In 2022, Regan Smith is the one with the target on her back. In 2016, 2017, and 2018, however, Smith was a teen phenom quickly chasing down the best backstrokers of all time. Smith is by no means old, she is only 20, and yet a new stable of young teenagers has risen, putting some of her National Age Group Records to the test.

15-year-olf Teagan O’Dell, 14-year-old Charlotte Crush, and 17-year-olds Berit Berglund and Jo Jo Ramey are more teenagers to watch. USA Swimming is not sending a team to the 2022 World Junior Championships, but if it were, some combination of these swimmers would likely be on it.

The United States has the greatest backstroke legacy of any federation in the world, and by the looks of things, will continue to produce the world’s best backstrokers for at least a another quad or two.

Dark Horses: NCAA standouts Reilly Tiltmann and Olivia Bray could make things interesting in Greensboro. Tiltman put up a 50.42 in the 100 yard backstroke at the ACC Championships in February, and Bray a 50.69 at NCAAs in March. Titlmann also posted a 1:49.63 in the 200 yard backstroke at NCAA, while Bray put up a 1:51.09 in the event at the Big 12 Championships. Given these times, we should expect both Tiltmann and Bray to have the closing speed necessary to challenge the 1-minute barrier, though neither has been particularly close to it yet. At present, Tiltmann’s best time in long course is a 1:01.94 and Bray’s a 1:01.27.

The 50 backstroke, like all the 50s of stroke, is a little bit of an oddball race. Being non-Olympic events, some swimmers ignore the 50s of fly, back, and breast, which sometimes opens the door for new berths to the World Championships team. This is usually the case for Regan Smith, who has never paid the 50 back very much attention, though she will certainly contend for a place among the top-2 in the race in Greensboro. However, the 50 backstroke falls on the same day as the 100 butterfly, an event she has always taken much more seriously.

The American and U.S. Open Records belong to Olivia Smoliga, who is also the 2019 World Champion in the event. In terms of raw speed though, none are faster than Katharine Berkoff and Gretchen Walsh, who posted 50 yard backstroke relay splits of 22.76 and 22.81, respectively, at the NCAA Championships, representing the two fastest swims of all time. Claire Curzan is another young sprint specialist with ridiculous speed and some of the best underwaters in the world.

Beata Nelson, Rhyan White, Gabby DeLoof, Olivia Bray, and Reilly Tiltmann are some others who could throw down a fast time and possibly make the team in this event.

The women’s 50 backstroke will be a heated battle between Smith, Smoliga, Berkoff, Walsh, and Curzan. Throw in Nelson and White and the women’s 50 back is now an extremely exciting 27-second slug fest. One thing that could work against Smith in this scenario is that the 100 fly and 50 back fall on the same day. Still, she managed the much more difficult 200 back/200 fly double at NCAAs, earning 1st- and 2nd-place finishes in each, respectively.

Amazing depth in that event in USA. As usual. With many of the best backstrokers among the top 10 at the international level. But the last gold medal won by a US woman in the 100 back at worlds/olympics was in 2013 with Missy Franklin in Barcelona! Since then only silver or bronze medals in 2015, 2016, 2017, 2019 and 2021. It sounds weird but that’s a fact.

Berkoff and Smith go 1-2 in some order and qualify for Worlds. Hopefully/wishful thinking 1-2 57s.

People are underestimating the toughness to break 58.
58.00 was a world record just three years ago. The fact that three women broke it last year doesn’t mean anyone can do it easily now.

Berkoff isn’t just anyone though. I acknowledge that SCY and LCM are worlds apart but 48.74 is insane enough that I would not bet against her being able to break 58. She’s dropped a full second in the SCY version in the past year and is “just” 0.62 away from 58.00 in LCM

I always felt sorry for Stadden because she was the same age as Regan and therefore always in her shadow as an age-grouper.

4
-8
Reply
Snarky
Reply to  Paste Me Back

I doubt she fees sorry for herself.

Did she dress up as Storm for Halloween?

lmao you have walsh beating white in the 100 back. This is the big pool remember

Honestly, any of these top 8 can get one-two and I wouldn’t be surprised. Yeah everyone is saying Regan is the favorite, but that’s what everyone said going into the 200 Back at trials, and the 100 at NCAA’s. The point is, that this sport and especially this event can be very unpredictable and anything can happen. Berkoff has looked really sharp this season, and I think she definitely has the chance to get into the mix for a spot in either/or the 50/100 Back.

Swimswam very high on the UVA ladies. We now have G Walsh beating Smoliga and White, among others.

Yeah. That is not going to happen.