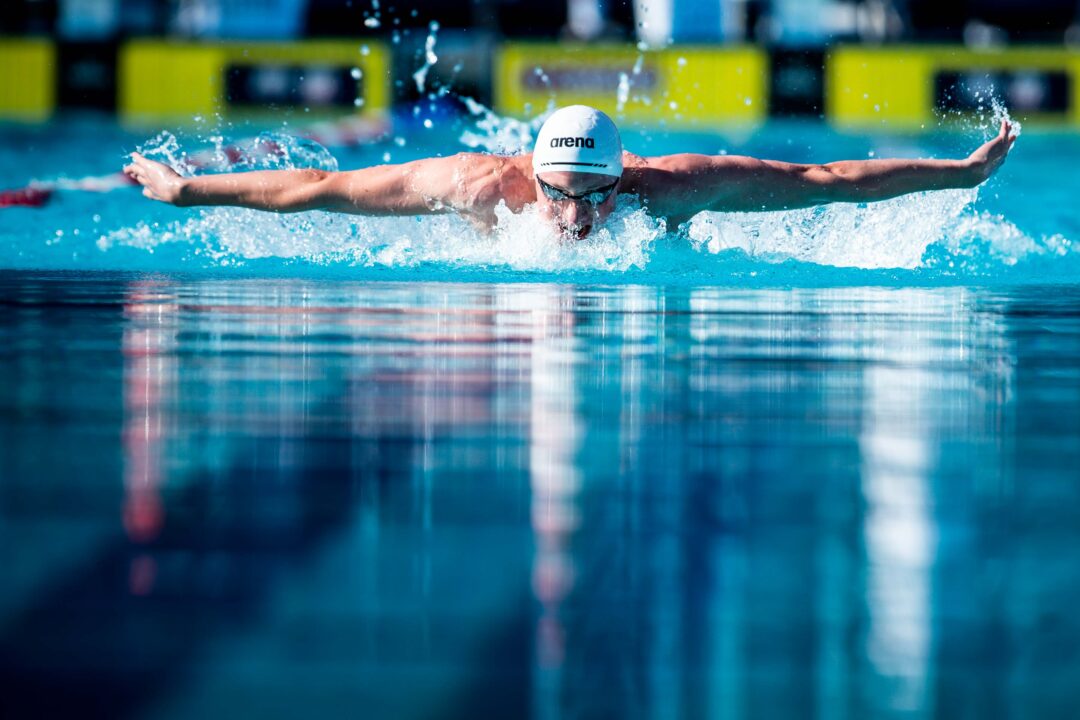 British Olympian Max Litchfield led prelims in the men's 400 IM this morning at US Nationals Day 3, and we'll see finals of the 400 IM and 100 fly tonight. Current photo via Jack Spitser/Spitser Photography

The action keeps rolling tonight in Irvine with finals of the 400 IM and the 100 fly. While there will only be four events, there should be plenty of exciting racing.

The racing will get underway with the women’s 400 IM, where the top two seeds belong to Leah Smith and Katie Ledecky. The duo has plenty of experience racing each other in freestyle, but we don’t see the two race each other quite as often in this event.

British Olympian Max Litchfield posted the fastest time in the prelims of the men’s 400 IM, and he’ll swim right next to Florida Gator Kevin Vargas, who was only 0.20s behind him this morning. Behind those two will be a slew of established college stars, led by US Olympian Kieran Smith.

Speaking of college stars, a pair of ACC swimmers — Louisville’s Gabi Albiero and Virginia’s Gretchen Walsh — battled each other in the same heat of the 100 fly this morning. They’ll get the chance to do so again tonight in the middle two lanes after Walsh touched just 0.o7s behind Albiero this morning.

Last but not least we’ll see the men’s 100 fly. Shaine Casas rocked a 51.04 this morning, the fastest time in the field by over a second, and we’ll see what else he — facing a strong field across the top 8 — has in store this evening.

In the post-race interview, Ledecky said that was her first new best time in four years, but that she had no intention of adding the 400 IM to her standard lineup.

Well behind the two leaders, there was a fierce battle for 3rd, and Felicia Pasadyn just touched out Looney, 4:42.79 to 4:42.80, to take bronze. That’s a huge best time for Pasadyn, whose previous best of 4:47.20 came nearly three years ago. Looney shaved a little over a second off of her previous best time of 4:44.12, which she set just last month.

The University of Minnesota’s Megan Van Berkom had a big swim in the B-final, blasting a 4:42.69 that would’ve been good for 3rd in the A-final and knocked three seconds off of her lifetime best.

Much like the women’s race, this turned into a tight battle between the top two seeds for most of the race. British Olympian Max Litchfield had the lead early on, opening up nearly a one-second gap on Florida Gator Kevin Vargas at the halfway point. But Vargas took control on the first length of the breaststroke leg, and he steadily continued to extend the lead from there, claiming the national title with a lifetime best of 4:11.45.

It was a big day for Vargas, who finished 11th in the yards version of this event at this year’s NCAA championships. He came into the day with a long course best of 4:16.54, lowered that mark to a 4:14.27 in prelims, then took nearly another two seconds off of that time tonight.

Litchfield, who’s a two-time European champion in this event, took 2nd in 4:13.08, followed by Litchfield’s Gator teammate Kieran Smith in 4:14.04.

Gretchen Walsh rocketed off to a fast start on the opening 50, touching roughly eight-tenths ahead of the rest of the field. In the post-race race interview she said she had a rough turn, and Gabi Albiero closed the gap on the back half.

At the finish, it looked Walsh could’ve benefited from an additional stroke instead of a long glide, but it didn’t matter in terms of placing, as Walsh still touched ahead of Albiero, 57.44 to 57.82.

Walsh came within a whisker of her best time, a 57.43 from last March. Albiero took exactly a tenth of a second off her lifetime best.

Yes, you read that correctly. Shaine Casas is now the 3rd-fastest American ever in this event, behind only Caeleb Dressel and Michael Phelps (and tied with Ian Crocker), after a sterling swim tonight in Irvine.

Casas went 50.56 just a few weeks ago, so it stood to reason that he would have a bit more in the tank here, and sure enough, his time tonight would’ve earned him a silver medal in Budapest tonight.

Australia’s Shaun Champion took 2nd in a new personal best 51.54, the only man besides Casas under 52 tonight. Cal’s Gabriel Jett, who’s been having a great meet, continued that trend tonight, setting a personal best of 52.17, then taking 3rd in 52.19 tonight. Jett touched just ahead of Andrei Minakov (52.24) and Ilya Kharun (52.31).

Anyone know when KL is slotted to swim her time trials over the next 2 days?

They take place after prelims. Saturday meet mobile says 10:40. No timeline for friday

Shane Casas had the swim of the night.

Who’s the better 100 flyer between Michael Andrew and Shane?

The one with the better PB

Whoever has fewer events that day

> Cal’s Gabriel Jett, who’s been having a great meet, continued that trend tonight, shaving 0.02s off of his personal best from this morning.
From what I see on omegatiming.com, he was actually .02 faster this morning.
Still a great time & place.

Good for Casas. That is diabolicly fast.

Could this swim make it reasonable to put Caeleb on free?

Does he have good flying splits?

I think it would be in the discussion. But multiple US men have been 46.6-46.9 on a relay (which is probably about what Dressel would be) while a 49.0 fly split is something else entirely.

Dressel could probably still split 1 second faster than Casas while he couldn’t outsplit Held or Apple by that much on free.

Not a good idea. Dressel’s PB flying split is 46.99, same as Ryan Held’s and slower than Zach Apple’s. But Dressel has by far the fastest fly split – 49.03 – compared to anyone ever.

Dresser quit in the middle of worlds. Not sure he is in the conversation any longer

Similar to the comments on KL about 18 months ago. Those critiques did not wear well and I suspect these won’t either.

Because his PB’s are still better than a vast majority of the world and he’s in his mid 20’s?

But having Dressel or Casas available for fly does free up Michael Andrew to do the breaststroke leg if he’s in better form than Nic Fink.

Good point! So many choices could actually be an issue if the coaches don’t choose correctly

We can see what he does on the relay next month. Put Ress on backstroke

I get that watching Ledecky swim the 400IM is like seeing what LeBron could do in the decathlon, but let’s not lose sight of the fact that 4:35 is really only that fast of a time considering where this time stack up historically at Olympics/WC

I think we all know that the 400IM has been weaker than trend the past 2 years.

How many swimmers would love to be ranked in top 8 in the world over the last decade an “off” event they don’t specifically train for?

The depth of Ledecky’s talent is mind blowing.

I’m an Aussie, who has NEVER trashed McKeown.

I breathe green and gold, but recognise talent whatever country they are from!

I think it’s the fact that the 400 IM is FAR down the totem pole of ledeckys best events. Her 15:20 1500 WR is unbelievable, her 8:04 might be even more unbelievable, and 3:56 400 free is still pretty freaking unbelievable. McKeown owns 1 WR and I wouldn’t say it’s untouchable at all. I think that’s the point: Ledecky literally owns the entirety of the history of women’s distance swimming and yet still manages a “bronze medal” 400 IM

one of the problems of swimming in the minds of people who do not follow sport that much, one individual dominating many events, like in athletics it is usually one or two disciplines at most…..