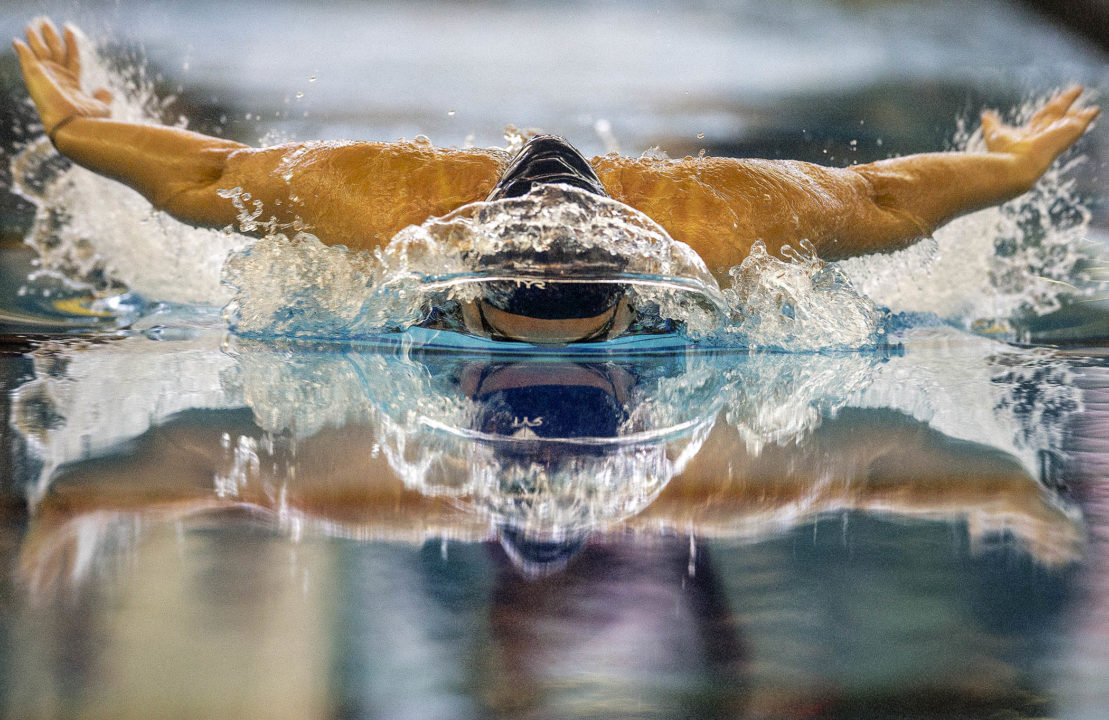 Keiser women and men topped the standings after the 800 free relays on Day 1 at the 2022 NAIA National Championships in Columbus, Georgia. Archive photo via Bill Ingram

After a year off, the Columbus Aquatics Center and the City of Columbus, Georgia have welcomed the best swimmers that the NAIA has to offer for the 2022 National Swimming and Diving Championships. Swimmers and spectators alike are quite enthusiastic to kick things off tonight with the opening events, the women’s and men’s 800-yard freestyle relays.

Not to overlook the controversy regarding athlete selection protocols for this year’s meet – there must be a better way – but the relay events are often the most exciting races of the meet and certainly the best indicator of each team’s overall strength. And since many coaches view the 200 freestyle as a good benchmark for swimmer progress, the 800 relay equally serves as a benchmark for team depth and instantly reveals the favorites to claim the overall title.

Scanning the psych sheet for this year’s entries, Keiser has a slight edge in both the women’s and men’s side. SCAD, defending champs in these events are well-positioned to play spoilers. The teams from Cumberland, Milligan, and Olivet Nazarene appear to be solid dark horse contenders for the women, while on the men’s side, Cumberlands and Milligan are too well positioned to rule out.

The first heat featured Saint Mary, Life, and Morningside. Life University posted a nice 15-second drop from their seed time to secure some extra points, but the big story from heat one was a near-30-second drop from Saint Mary to overtake Morningside and put some added pressure on heat two with a time of 8:16.72.

Speaking of heat two, ninth-seeded Westmont left their lane vacant, giving the women of St. Ambrose the opportunity to take control of the race. After leading for the first three legs, however, freshman Josefina Gonzalez of Bethel and senior Ulrike Tovilla of Loyola New Orleans managed to erase that lead and take their race all the way to the wall, with the Bethel squad earning a 0.11-second edge to claim the heat. St. Ambrose, Loyola, and Bethel all broke the 8:00 mark for the first time this season.

In the top heat, SCAD senior Spencer Sheridan took the early lead with a 1:52.53 opening split, followed closely by Milligan’s Maggie Blazo (1:52.83) and Keiser’s Karina Braathen (1:53.15). Keiser claimed and held the lead through the next two legs, with SCAD a close second and Cumberlands overtaking Milligan and Olivet Nazarene to hold the third position heading into the final leg. After a little back and forth, Keiser’s Stefania Sofouli held off SCAD’s Sloan Sizemore to secure the win. Cumberlands finished third with a strong finish from junior Maria Basto, who posted the fastest split of the night with a 1:51.87. Milligan took fourth place, followed by Olivet Nazarene, Midland, Indiana Wesleyan, and Lindsey Wilson.

For the men, heat one was dominated by the crew from Simpson, who entered the race with no time, but led from the jump and held on to post 6:57.77, the only time under seven minutes. That should earn them some points. Campbellsville followed in second, shedding five seconds from their seed time to touch in 7:03.21 while Saint Mary and Union battled it out for third. Saint Mary withstood a late surge from Union to edge out the victory.

The second heat saw five more times under the seven minute mark, led by a strong showing from the St. Thomas men, who took the heat with a time of 6:50.53. That time should put some pressure on the top heat to hold onto their points. There was a lot of jockeying for position throughout this heat that eventually saw Midland and The Master’s University finish within a half second of each other (6:57.14 and 6:57.65, respectively), as well as a pair of 6:59s from Thomas and Morningside. The Bethel men posted a time of 7:04.24 to retain their spot in the top 16, but Life and Arizona Christian both fell out of the points, posting 7:16s which wasn’t quick enough to fend off the efforts of Campbellsville and Simpson from the previous heat.

The final heat of the night figured to be a battle for first place between Keiser and SCAD, a battle for third place between Cumberlands and Milligan, and then a battle for the rest of the field. Indeed, Keiser took control with an early lead, followed closely by Milligan and SCAD, and held that lead throughout the race. As the teams headed into the final leg, SCAD’s Joel Thatcher unleashed a 1:35.62 split – quickest of the night – to close the gap, but it wasn’t to be, as Keiser’s Alberto Garcia got his hand to the wall a quarter second sooner. Milligan rounded out the top three with a nearly nine-second improvement on their seed time. Cumberlands finished fourth in the heat, but their time of 6:50.68 fell just short of St. Thomas’s time from the previous heat, so they settled for 5th overall. Lindsey Wilson, St. Ambrose, and Olivet Nazarene finished sixth, seventh, and eighth overall while the men from West Virginia Tech failed to crack the seven-minute and fell down to 14th.