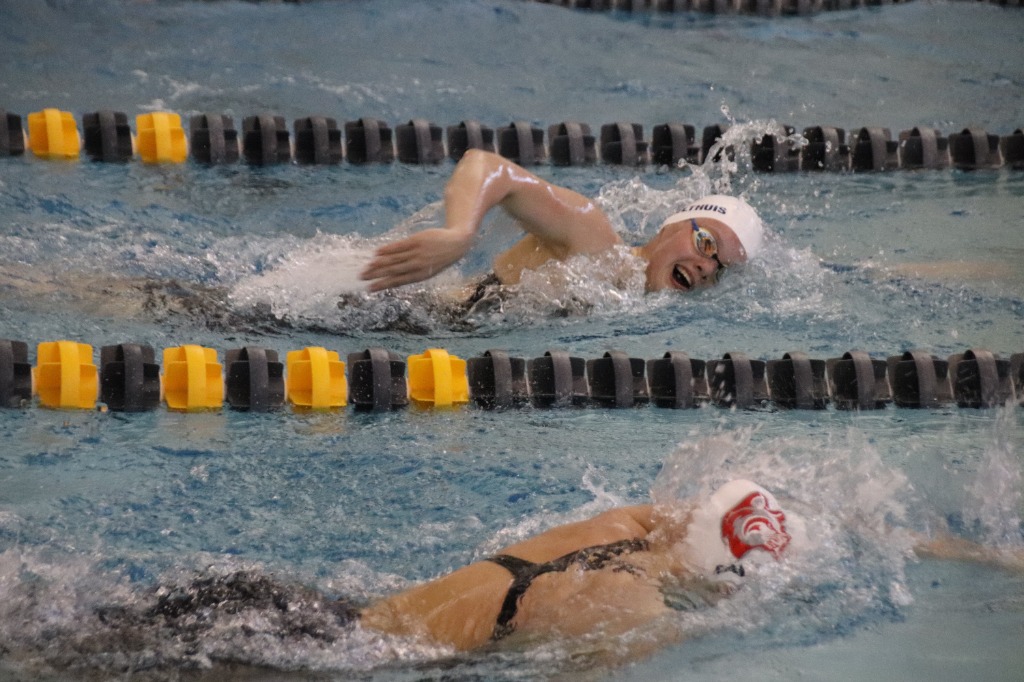 University of the Cumberlands sits in second place in the men's rankings and fourth in the women's on Day 2 at 2022 NAIA Nationals. Current photo via @UCPatriots_Swim

We’re back to do it all again, but this time, the points count and there are relays. Tonight’s finals begin with the 200 free relays, three heats each in a timed finals format. There were no noticeable scratches from this morning, so the individual events should be as expected from the prelims results. Finally, it all wraps up with the 400 medley relays.

A number of meet records are on notice tonight, as returning champ and current record holder Joel Thatcher will be contesting the 500 free. The same goes for Isabella Song, but for the 200 IM. As previously mentioned, the men’s 200 IM has four sub-1:50 swimmers with a shot at the record, most notably Marti Renea Vila of Keiser and his teammate, top seeded Fynn Kunze. And for all intents and purposes, the 50 free and any relays are always fair game.

Westmont, the lowest seed, took charge of heat one and picked up the win posting a time of 1:39.41. That time should rival a number of teams in heat two as well – and indeed it did. The second heat was won handily by the women of Milligan in 1:38.18, followed by Bethel with a 1:39.76 and Brenau, who completed the event in 1:40.03. That means Westmont earned no less than tenth place swimming out of the first heat.

For the final heat, all eyes instinctively went to the center lanes, where SCAD and Keiser squared off. These two rivals were very evenly matched, and they spent the entire race playing tug of war with each other until SCAD eventually reeled in the victory with a clutch 22.99 split from anchor Sloan Sizemore. One lane out on each side featured another tight battle, between Olivet Nazarene and Cumberlands, with ONU taking third place overall.

Heat one of the men’s 200 free relay was claimed by Thomas University with a time of 1:26.30. The Master’s University was hot on their heels with a 1:26.87. We’ll see how those times hold up. Unfortunately, Life University’s team was disqualified for an early takeoff.

Lindsey Wilson managed to hold off Campbellsville and Simpson in heat two. The three schools battled to the wall, finishing 1:25.53, 1:25.70, and 1:25.98, respectively. Olivet Nazarene’s squad finished just ahead of the time Thomas put up in the previous heat to claim fourth place for the moment.

Keiser all but ran away from the field in the top heat, winning by over two seconds with a time of 1:20.87, so the drama came in the race for second through sixth place. St Thomas and Cumberlands put up a nailbiter that inspired a 19.99 anchor split from Alex Marrero to chase down Cumberlands and claim the win by 0.07. The teams from Milligan, SCAD, and Morningside finished in a tight grouping to claim fourth, fifth, and sixth.

The B final of the women’s 500 free offered a bit of a redemptive swim for Milligan’s Gabby McPherson and Indiana Wesleyan’s Erica Samuel. After falling from the third and fourth seed overall into the B final tonight, McPherson established an early lead and kept it, touching first with a 5:08.17, followed by Samuel’s 5:10.75. Olivia Garrison (Westmont) took third place in the heat with a 5:11.87.

The championship final felt like it was going pretty much as seeded with top seed Marine Lecomte of Keiser controlling the pace for the better part of the race. As the bell rang in her ear and she turned for her last 50 yards, it seemed like she had a fairly comfortable lead. But Alexandra Pecore (Cumberlands) had something else to say about that. Pecore stormed home on the final lap like a heat-seeking missile, posting a 28.34 split that was two full seconds faster than anyone else in the pool. It was enough to claim the heat and the title of champion as Pecore found the wall in 5:00.77 to Lecomte’s 5:00.86. You might say, she “Finked” it, but however you slice it, this was the race of the night so far.

SCAD teammates Emily Elz and Haley Vanbuskirk hit the wall together as well, but it was Elz who came away with third place.

The men’s 500 free B final kept everyone guessing as the center four swimmers traded positions throughout the race. Ultimately, the advantage went to Martin Herion (Cumberlands), as he edged out Bethel’s Mikolaj Synowiec, 4:34.52 to 4:34.64. Andre Bazzana (Milligan) was third to the wall with a 4:36.74.

The A final was the Joel Thatcher show. The SCAD swimmer steadily pulled away from his peers and chased the record time he put up back in 2017. While Thatcher didn’t lower his meet record, he did log a time of 4:21.68, which was more than enough to claim the title. Keiser’s Haakon Syrrist and Lindsey Wilson’s Fabio Martin Rojo rounded out the top three with impressive swims of their own, clocking 4:30.83 and 4:31.05 respectively.

Keiser teammates Timea Aspegren and Lily Robinson paced the B final of the women’s 200 IM with Aspegren claiming first in 2:08.92 and Robinson following with 2:09.11. They were flanked by Olivet Nazarene’s Julie Vega and St. Thomas’s Mikayla DePover. DePover held the third position for much of the race before Vega chased her down on the freestyle leg to get to the wall two tenths of a second faster, with a time of 2:10.25.

Maria Basto from Cumberlands brought some outside smoke with her to the A final, jumping out to an early lead in lane eight. Her efforts to pull off the upset were foiled, however, as she eventually faded to fifth place with a 2:06.61. It was Keiser’s Camryn Hudson who managed to fend off the back-half speed of Olivet Nazarene’s Allison Pearson to claim the title tonight, with a time of 2:05.52. Pearson, for her efforts, earned second place, falling 0.03 short. Filling in the gap were Keiser’s Ori Freibach and tonight’s top seed and defending champion, Isabella Song (SCAD), touching for third and fourth place.

On the men’s side, the outside smoke prevailed in the B final as James de Goede (Lindsey Wilson) took the rest of the field by surprise to post the top time of 1:52.09 from lane one. Midland’s Zander Livingston claimed second after holding off the Keiser duo of Joshua Smith and Eduardo Ojeda.

Bayley Blackmon of Brenau brought the best mark to the B final of the women’s 50 free, posting a quick 24.19 second swim. Milligan’s Maggie Blazo and Hanne te Velthuis (Cumberlands) took second and third in the heat with times of 24.33 and 24.36.

For the championship, SCAD swimmers led the charge, putting four swimmers in the top five podium spots. Sloan Sizemore finished first in 23.12, accompanied by teammates Anna McGinty and Spencer Sheridan who took third and fourth. Disrupting the SCAD dominance was Maaike Broersma of Lindsey Wilson with a 23.73, which was good enough for second.

The Men’s B finals for 50 free were interesting to say the least. Zac Robinson of Saint Ambrose claimed first place decisively as the only swimmer under 21 seconds. Except, it wasn’t actually Zac Robinson. Somehow, Alex Marrero (St. Thomas) and Robinson switched blocks and swam in the wrong lanes. After a brief meeting of the rules committee, both swimmers were disqualified and both times were nullified. This left Julio Heck da Silva of Cumberlands to claim the top time in the heat with a 21.04, followed by Ian Lopez (Campbellsville) and Wiktor Perkowski (Milligan).

The championship final went a little smoother and saw Alberto Garcia post a 20.03 to land atop the podium. Keiser teammate Emerson Zaplatar joined Garcia with a second-place showing of 20.17, while West Virginia Tech freshman Donat Fabian rounded out the top three with a 20.25.

The women of Westmont did it again, dominating the opening heat with a time of 3:57.65, which is likely going to place them in the A standings. Saint Mary and Morningside rounded out the heat as the women of The Master’s University suffered an early takeoff disqualification. In the second heat, it was the St. Thomas women who stepped up and broke the 4:00 barrier to claim first. Their time of 3:59.18 puts them right behind Westmont with only the top heat remaining.

In the final heat, it was Keiser who claimed the victory. Despite being fifth after the backstroke leg, the team took the lead during breaststroke and never looked back, posting a 3:49.21. Olivet Nazarene’s race followed a similar trajectory as they went from sixth to second after breaststroke to finish up in second with a 3:50.69. The battle for third place was one for the ages as Milligan managed to keep SCAD (3:53.99) and Cumberlands (3:54.01) out of the top three, clocking a 3:53.90.

Bethel led off the men’s side with a win in the opening heat. Their time of 3:30.07 gives them a great chance to earn some points. In heat two, Simpson came back from fourth place to first with a 3:26.42 to the chagrin of Lindsey Wilson, whose team finished in 3:26.69. Both teams have a shot at the top eight with those times.

The top heat was another great showing for the Keiser men as they left everyone in their wake, winning handily with a 3:13.83. St. Thomas took an early lead with a strong backstroke leg and held onto second place, finishing with a 3:18.15. Third place went to SCAD, who fought their way back from an early deficit to finish strong with a 3:21.19.