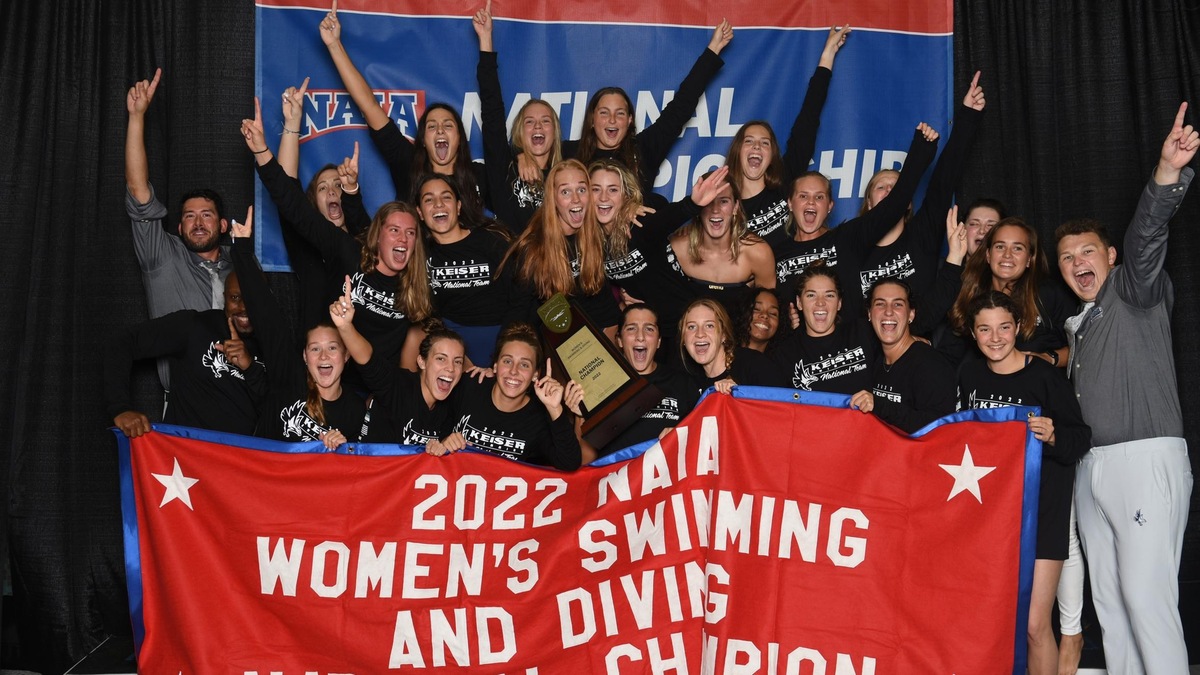 University of the Cumberlands sits in second place in the men’s rankings and fourth in the women’s on Day 2 at 2022 NAIA Nationals.

It’s the final night of finals but there’s still plenty of action to look forward to tonight. The events kick off with the top heats of the mile. For the women, the top seed is Morgan Bienias of Westmont. She’ll need to fend off Erica Samuel and Josefina Gonzalez who sit just six seconds behind her on the psych sheet. That may seem like a lot, but it is a long race. There were some heats swum earlier today, but if all eight of these women swim and swim at their seed time or better, they will be the eight All-Americans in this event.

The men’s mile has a slightly different makeup as Sebastian Escobar and Malte Ahrens already swam times that would beat some of the seed times tonight. The clear favorite in the field is defending champ and meet record-holder Joel Thatcher, with Fabio Martin Rojo the closest threat to that rank sitting ten seconds behind him on the psych sheet.

In the 200 backstroke, we’ll be looking forward to a three-way battle between Maaike Broersma, Marine Lecomte, and Maria Basto. On the men’s side, three swimmers from Keiser (Marti Ranea Vila, Fynn Kunze, and Alex Kusik) sit in the middle four lanes alongside Nicholas Klenner, who cracked 1:50 in prelims this morning. However, last night’s 400 IM champion Stephen Gilbert has proven speed in this event and he will look to bring some heat from lane seven.

The women’s 100 free features the alliteratively spectacular SCAD swimmers, seniors Spencer Sheridan and Sloan Sizemore who should steal the show. (Sorry). The duo will look to hold their positions as the face off against a foursome from Keiser and a pair of Cumberlands swimmers. On the men’s side, Scott Cain comes in with the top time, but Alberto Garcia is not far behind and has shown some great speed already this meet. Should be one to watch.

In the 200 breast, a trio of Keiser women – Nikoline Biltoft-Jensen, Alexandra Giourtzidou, and Lily Robinson – will duke it out to see if they can pull off the coveted sweep in the event. For the men, it looks like it will be a race for second place as Emerson Zaplatar appears untouchable. After narrowly missing the national record in the 100 breast last night, we should expect he’ll double his efforts tonight with his sights on that 1:56.96.

Wrapping up with butterfly, the fields look fairly open for both the women and men. Top seed Camryn Hudson has a little over a second buffer between her and the next closest competitor, but you never know how much was saved up from the morning swims. Similarly, Kacper Sobieszuk sits atop the field with an edge of 0.60 seconds, but that is still within reasonable striking range for Miles Kredich. Beyond that, Milligan’s Andre Bazzana and Keiser’s Gergo Zachar are so evenly matched that it will be a true toss up unless one of them really steps up.

After the fly events, there will be some diving and then the meet will conclude with 400 free relays which will surely be loud and competitive no matter what the scores look like at that point.

In the early heats of the mile, Haley Vanbuskirk came in with the fastest time of 17:56.52. She was the only swimmer under 18 minutes. Following Vanbuskirk were Alivia Bell with an 18:01.39 and Trinity Schmidt, who turned in a time of 18:14.99.

The finals heat was quite literally a tale of two divergent strategies colliding in the same race as Stefania Sofouli and Anna Maria Lowary clearly approached this race from different angles and yet it came down ultimately to a 50-yard sprint to determine the winner. Sofouli attacked the race from the beginning, building an eight second lead in the first 400 yards, which is about when Lowary began her attack, slicing a second off the lead in each of the next four 200s, before doubling down as the race drew to a close.

By the final 50, the lead was less than a second and the two swimmers garnered cheers from the crowd as they put everything they had into the final stretch. Sofouli walked away with the title, touching in 17:29.67 to Lowary’s 17:30.43 and the night was already off to a great start. Josefina Gonzales of Bethel claimed third place with a 17:40.01 just ahead of Milligan’s Gabby McPherson as top seed Morgan Bienias fell to fifth.

The morning heats included a few swims that could threaten to take a spot on the podium as Sebastian Escobar swam to a 16:11.10 and Malte Ahrens posted a 16:14.15. Both times rank in the top eight per the psych sheet. Rounding out the top three was Oier Fernandez.

Tonight, Joel Thatcher did the Joel Thatcher thing and swam a steady, balanced 15:27.79 mile that placed first by nearly thirty seconds. It is something to watch. Fabio Martin Rojo shaved a couple seconds off his seed time to take second place with a 15:55.47. Third place went to Mikolaj Synowiec who, along with Haakon Syrrist dipped under sixteen minutes.

Allie Rassenfoss took this race out and gained an early lead, but Paige Howell leaned in and tracked her down in the back half to claim the win in the B final with a tally of 2:05.61 to 2:05.81. Third place went to Ella Sackett, who uncorked a final 50 that was just enough to reel in Mia Thatcher.

In the A final, Marine Lecomte slowly built a lead over Maaike Broersma during the first 150 and then blasted a final 50 that allowed her to pull away completely. She took the win with a 1:58.87. Broersma’s time of 2:00.25 was enough for second place. Meanwhile, just about two seconds behind the leaders, Maria Basto employed the same strategy on Milligan’s Tyler Cates, ultimately taking third place with a 2:02.25.  And if that wasn’t enough excitement for one race, just a few seconds later, Bonnie Dixon ran out of room in her quest to chase down Olivia Cummins for the fifth position, touching just two hundredths behind her.

Gaetano Zapata came from behind to score the victory in the B final with a final split that was nearly two seconds faster than Ryan Joehl’s. Zapata finished in 1:52.13, Joehl took second in 1:52.34 and Liam Kuiper came in third.

In the A final, Marti Ranea Vila took the early lead, but fell prey to the back-half speed of Fynn Kunze, who charged home with a 1:46.79. Stephen Gilbert followed the same path, but ultimately touched in third place. His 1:47.09 was just two-hundredths of a second behind Ranea Vila. Alex Kusik and William Thilwind both broke 1:50 to round out the top five.

In the A final, it was the two SCAD speedsters who went 1-2, as Sloan Sizemore and Spencer Sheridan hit the wall in 51.16 and 51.59, respectively. Timea Aspegren took third with a 52.07 while her teammates Emma Sofie Augustsson and Camryn Hudson shared fourth place – each swimming a 52.33.

Cumberlands’ senior Enzo Esteves took first place in the B final with a time of 46.28. Pol Roch posted a 46.32, which was good enough for second place. Third place went to Ian Lopez.

The A final was very close up to the final 25 yards, when Alberto Garcia found a new gear and rocketed home to take the victory in an impressive 43.93 Scott Cain and Donat Fabian took second and third with times of 44.94 and 45.10, respectively.

The B final went to Ori Freibach. Freibach dropped about five and a half seconds from her morning swim to post a 2:20.49, well ahead of her peers in the heat. SCAD’s Isabella Song had second place all but sewn up but teammate Kaila Pardus snuck in and got to the wall quicker due to a strong back half.

The championship final featured a steady swim from Nikoline Biltoft-Jensen as she improved her time and landed a 2:17.00 to claim the title. Teammate Lily Robertson followed in second with a 2:18.61, but Olivet Nazarene’s Julie Vega edged out Alexandra Giourtzidou to prevent a Keiser sweep.

Kenneth Chism ran away from the field in the B final, posting a 2:03.50, over two seconds ahead of Eduardo Ojeda’s second place efforts. Alejandro Evreinoff Salinas completed the event in 2:05.86 to claim third place in the heat.

In a stunner, Indigo Marina of St. Thomas caught and passed Emerson Zaplantar around the 125 yard mark to take home the crown with a winning time of 1:58.32. Zaplantar, who had been the dominant breaststroker of the meet thus far, contributed a 1:59.14 to claim second place ahead of teammate Theodor Myklebusthaug. Zander Livingston and Mikolaj Kala filled in the top five.

Jenna Copes controlled the B final of the women’s 200 butterfly, shaving off a little time from this morning and finishing in a 2:09.74. Paula Ronda Bou and Emily Elz took second and third in the heat.

Top seed Camryn Hudson led the entire race in the championship final, with Ashley Parry on her shoulder, waiting to strike. Unfortunately for Parry, that time never came, but she did drop plenty of time en route to her second-place finish. Anna Herbst took third, ahead of a quartet of 2:07s from Noelia Garzon, Allie Rutherford, Karlie Rimat, and Gabby MacPhearson.

Ethan Kilgore took the B final with a time of 1:53.35. Maik-Sebastian Rieffenstahl and JT Sears took second and third.

In the A final, top seed Kacper Sobieszuk fell to third place as SCAD’s Miles Kredich and Brandon Vives slid past him to go one-two in the event. Kredich posted a 1:48.96 and was the lone swimmer to crack 1:50. Andre Bazzana and Gergo Zachar rounded out the top five.

Bohm, the lone diver in the meet, won the 1-meter event with 222.20 points and added 20 points to College of Idaho’s tally. He was named Diver of the Meet.

The College of Idaho blasted a time of 3:36.51 to handily win the first heat. That time will quite likely land in the top eight. Arizona Christian went from seventh to first over the course of the second race, posting a 3:37.83 to win the heat. Westmont posted a 3.38.51, ahead of Bethel and Loyola.

Keiser earned the top of the podium with a 3:27.11, followed by SCAD and Olivet Nazarene. All eight teams in the final heat were quicker than Idaho’s time, which keeps them locked at ninth place.

Heat one went to Simpson (3:08.30), followed by West Virginia Tech (3:09.69) and both of those times should score some points. Heat two belonged to Saint Ambrose as they took the win in 3:04.02, about four seconds faster than The Master’s University, who came in second.

In the final heat of the night (and the meet), Keiser’s relay team uncharacteristically fell from the top seed to the fourteenth fastest team. In their place, SCAD took home the win with a 3:01.17 that featured a blistering 43.73 anchor leg from Joel Thatcher. St. Thomas outdueled Milligan for second place and the Cumberlands finished fourth in the heat, fifth overall.