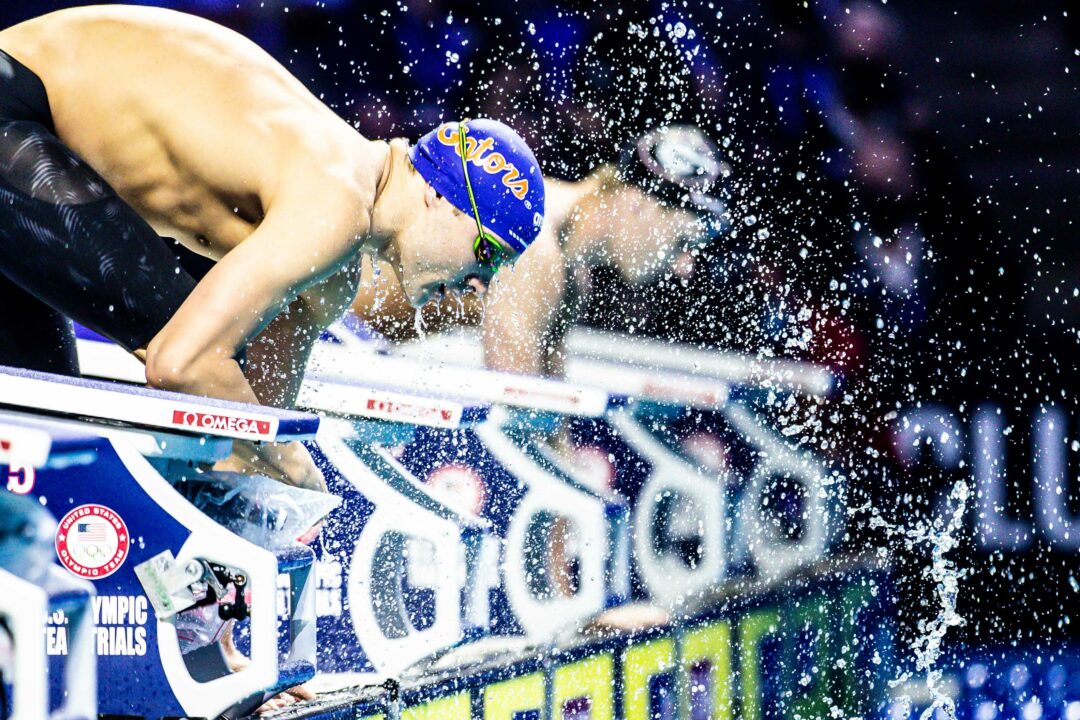 The 2021 US Open Championships will commence with a brief but star-studded Wednesday night distance session. The only events on the docket for day 1 are the women’s and men’s 800 freestyles.

Olympic gold medalists Katie Ledecky and Bobby Finke are among those entered in the 800 freestyle. This will represent each of their first times racing long course since the Tokyo Olympics where Ledecky claimed her third-straight 800 freestyle title, while Finke collected his first.

Both of them are the current American record holders in the event and are currently training at the University of Florida.

While Ledecky and Finke represent the top seeds in the event with an 8:12.57 and 7:41.87 entry time, respectively, they will be joined by several worthy competitors. On the women’s side, Leah Smith and Sierra Schmidt represent the 2nd and 3rd place entries. Smith is a decorated distance swimmer, having earned bronze in the 800 at the 2017 and 2019 World Championships, along with bronze in the 400 and Rio 2016.

On the men’s side, Finke is joined by NC State’s Will Gallant who recently placed 5th overall in the event at Olympic Trials. Gallant swam a 7:57.97 in the event this summer in Omaha but boasts a PB and entry time of 7:53.76 from the prelims of that meet. He’ll be racing in lane 5 next to Finke during the fastest heat of the night. On the other side of Finke will be French swimmer and third seed Tommy-Lee Camblong. Camblong holds a 7:53.59 entry time in the race, which he swam at the 2019 World Championship to place 6th overall.

Finke was originally going to be joined by 3rd place finisher in the 800 freestyle at Olympic Trials Ross Dant and Venezuelan Olympian Alfonso Mestre but both men, who were seeded 2nd and 3rd, respectively, scratched at the last minute.

Katie Ledecky did what she does best and began this race by creating distance between herself in the field. She opened the race with a 59.26 to make her the only sub-1:00 woman in the field and had established a lead of nearly 3 seconds by the 200-meter mark with a 2:00.91.

By the halfway point, Ledecky was 6 seconds ahead of second-place Leah Smith‘s 4:11.19 with a 4:05.68. That split for Ledecky was just under a second slower than her opening split of 4:04.70 at the Tokyo Olympics. Ledecky kept up the pace on the back half of the race, ultimately touching with an 8:12.81.

That swim for Ledecky is less than 0.30 seconds slower than the time Ledecky swam this summer in Tokyo to claim Olympic gold of 8:12.57. The swim marks Ledecky’s 17th quickest performance ever in the event and is a new US Open meet record, improving upon the 8:14.59 she posted back in 2019.

Bobby Finke managed to win his first long course race since the Tokyo Olympics, hitting a 7:54.07 to win the first men’s heat of the night. While Finke led the pack for the majority of the race, he nearly lost the race when Ohio State swimmer Charlie Clark made a last-minute bid.

Finke relied on his impressive closing speed and threw down a 27.20 closing split to re-take the lead and get his hand on the wall for a final time of 7:54.07. Clark was just off Finke’s winning time with a 7:54.40.

Left Meehan and already swimming amazing again. Go gators thanks for bringing our girl back. Speaking of Meehan- where has Manuel been? MIA… retiring? I hope not.

Idk but she needs to take a trip elsewhere. NC State or UVA would be good fits

Hopefully she’s looking around for a new coach.

If to not count the final race in Tokyo Olympics where Ledecky was just a few tenths of the second faster then she was that good more than 3 years ago. Great. Another good sign is that she was significantly faster at her last 100m than in Tokyo (1:00.23 vs 1:01.49). Her finish was an issue at all events she swam in Tokyo.
Let’s see what she shows in other events at this meet, but this her race makes me think that this meet is some kind of check point and isn’t just another day during her in-season training process but required some special preparation.

Easier to close when you haven’t already had 4600km of racing.

True. But she had a weak finish in 400, both 200 and 1500 as well. It could be the consequences of the strategy that focuses on the strong first half of the distance.
Have the tiredness affected her performance at 800 race? No doubts. To what degree? I think Ledecky was in 8:09 – 8:10 form should the 800FR be the only her event or it was at least at the beginning of her program.

Faster than anyone else, ever. Always in awe.

Lol why she going that fast

bc shes the goat

Sarah Sjöström and Katinka Hosszu are better than her and in different strokes.

she is the GOAT, cope and seethe

You’re comparing arguably one the greatest female sprinter and IM swimmer to the greatest long distance swimmer lmao. They’re all or were goats at what they do best so shush

Agreed. She is the best 800 swimmer which is what is currently the most relevant…

But if it were a 100 Sjostrom would be

Not arguing with you but making some insignificant ( 😀 ) addition to your statement:
the long distance swimmer who is a world record holder in 400 distance and is the third ever performer in 200 event (textile) and 52,6 achiever at 100 distance (relay start).

No, no it’s fine. Both ledecky, hosszu and sjostrom have some amazing achievements outside of their speciality events and everyone should be able to accept that without trying to compare them. It’s so dumb

Ledecky won an olympic gold in the 200 free…

Yes I know but not really relevant. Both sjostrom and ledecky are known to be one of the best 200m freestylers in the world and they are but that’s not what they do best.

Why you gotta hate the distance swimmers?

If you judge by the world records then indeed these swimmers have amazing ones. But if you check their career performances then each of them have been #1 performer less than a half years of their swimming career. Ledecky has more successful years (#1 rating) and her records will stay longer than records of Sjostrom and Hosszu. Plus Ledecky and Sjostrom are competing in the events that are witnessing the recent development of strong competition. The competition in women’s IM events are in stagnation if not declining.

That’s just silly man. That’s like comparing Sun Yang (before his disgrace) to Lochte to Cielo.

Seems like her fastest 800 at this time of year (November/December).

The 800 was at like the end of her meet so she was completely wiped out in Tokyo.