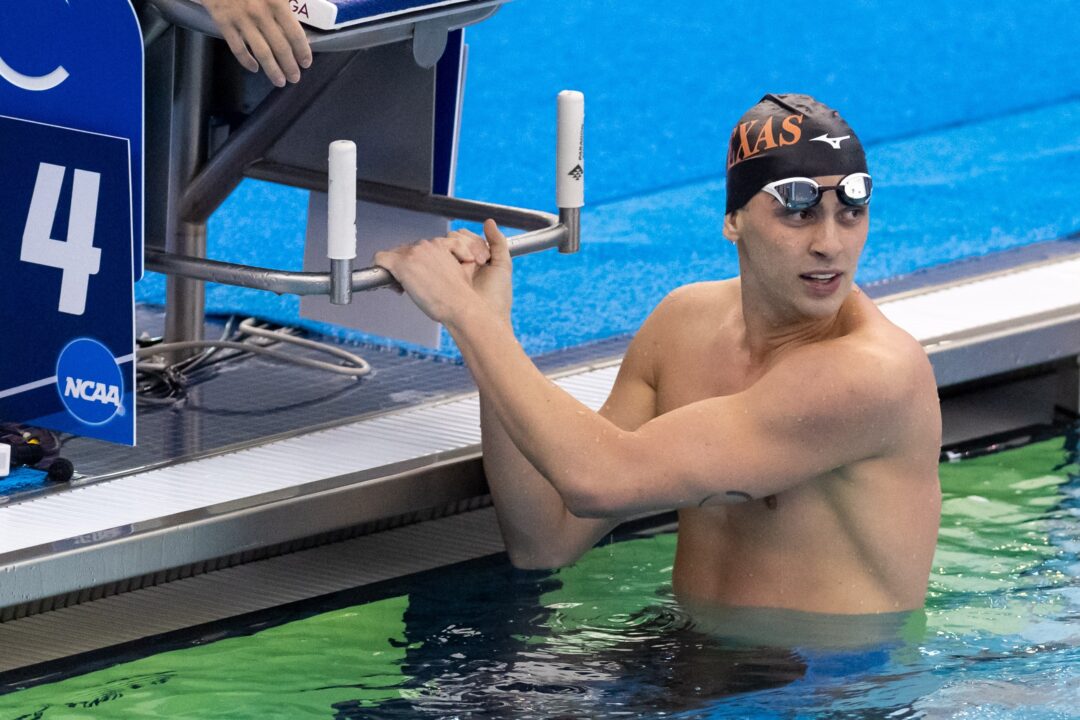 The Texas Longhorns have set themselves up for an explosive Friday night finals session in Greensboro, snagging 10 up and 4 down swims, four in the 4IM alone. Current photo via NCAA Photos

The Texas Longhorns carried over their evening momentum from last night after earning a 1-2 finish on the 1-meter diving board and winning the 400 medley relay. Entering this morning’s prelims, the Longhorns set up a dominant night with 14 returning swims, 10 up and 4 down. Cal (6/2), Georgia (4/2), and Florida (4/1) were all not even close to matching Texas’ depth in the pool.

With the evening Texas set up, the Longhorns will score in all five individual events, including more than 55 projected points in two events (400 IM/200 FR). Meanwhile, Cal won’t score more than 40 points in a single event. In total, the Longhorns are expected to pick up 170 points in the pool before 3-meter diving and the 200 medley relay. Cal has the second-most with 104 points, which can result in a 39-point deficit to Texas after leading the first two days.

Into the 100 fly, top seed Ryan Hoffer is Cal’s only scoring swimmer in the event while #5 Alvin Jiang and #11 Sam Pomajevich are the two scoring flyers for Texas. The Georgia Bulldogs reeled in #3 Camden Murphy and #8 Luca Urlando in the A-final, a projected 27-point snag.

Texas’ other big event was the 200 free, qualifying Drew Kibler as the top seed followed by #4 Peter Larson and #8 Jake Sannem. Larson was not a member of the winning 800 free relay, which consisted of Kibler, Austin Katz, C. Foster, and Sannem. His 1:32.53 split from this morning would have improved the Longhorns’ relay to 6:06.81 if he replaced Katz’s 1:33.02 split. In for Cal as the 3rd seed is senior Trenton Julian while junior Kieran Smith picked up another top-3 seed for Florida.

In the 100 breast, Minnesota junior Max McHugh will be aiming for his first NCAA title after placing third as a freshman in 2019. In the championship final, McHugh will be joined by #3 Dillon Hillis of Florida, #4 Reece Whitley of Cal, #5 Zane Backes of Indiana, and #7 Caspar Corbeau of Texas.

After winning Texas A&M’s first individual NCAA title in program history, junior Shaine Casas will aim for a second title in the 100 back. Cal freshman Destin Lasco continues his breakout meet with his #2 prelims seed in this event along with teammate #8 Bryce Mefford. Placing 16th this morning was Cal senior Daniel Carr, who placed 7th in the 2019 final after hitting 44.86 in a re-swim following a starting wedge malfunction. If Carr can at least drop from 45.53 (this AM) to a 45.21 (his 2019 finals time), that would give the Bears’ an extra 7 points in the event. Texas will have #7 Jiang again in the water while Indiana sophomore Brendan Burns picked up the 5th seed.

Not including: 3-meter diving, 200 medley relay

Not including: 3-meter diving, 200 medley relay

those 400IM time are good for A- final at NCAA for RL, and CD just missed B-Final.

And imagine anyone attempt that triple at NCAA 🤪

You could of course also do the so called “pain triangle”: Mile/2back/2fly, but I don’t think anyone could seriously contend in all three events.

In DI probably not. Probably a couple of DII or DIII swimmers who could be top 8 in all three.

Well, someone like Lochte could actually do “the Lochte”. Seliskar could’ve probably done “The Phelps”, but it would have made no sense at all, because you couldn’t possibly win all three (And Seli did win all of his individuals).

I think Kruegers best is around 1:33 which wouldn’t have scored anyways. He’s definitely a sprinter.

So I see today’s shaping up to be “The Empire Strikes Back” installment of this 3 day meet. Nice. I’m glad the Texas fans got something to cheer about. 🙂 Still think building that 2nd Death Star is a bad idea but we’ll see.
That being said, I am going to need something significantly stronger to drink while I watch the finals session.
Can’t wait for even faster swimming by anyone and everyone tonight. Go Bears!

Cal wins the relay tonight and opens with 1650/200 Back. This is far from over

This is a bold prediction, but we’ll see. Seriously thinking they will add atleast a second.

Add a second to their seed time (1:22.74)? Based on their swims from earlier in this meet, I don’t get that vibe at all.
I think each of these legs is realistic. Which one do you have trouble with?

Strange words when you consider which college built the atom bomb…

I have no idea what you are saying here but I am going to assume it is an insult so how dare you.

Texas with a one roll Yahtzee this morning

ikr. The cherry on top of this prelim sweep sundae is that Gonzalez didn’t make A-final. Remember people saying he might/will upset Foster in the 400 IM?

Yes, if Texas wins it will be in large part to a ~100 point effort from the divers, but what if Texas gave those 1.5 schollies to other…..swimmers?

Also, gotta pick Cal over Texas in the Relay tonight

Isn’t the sentiment of Texas being able to declare victory is a bit premature? Cal was only seeded 2/6 today, so they improved quite a bit on paper as well, added same number of A finalists. Given how strong they are tomorrow I think they are still favored to win

The sentiment of saying Texas will win because of prelims today is the same as people declaring Cal would win because of yesterday. The meet isn’t over until it’s over.

It wasn’t over when the Germans bombed Pearl Harbor!

Can’t forget about the mile on Saturday either. I expect Greishop and Yeadon to score big for Cal. Should make the math pretty close….

Texas has three guys in the mile who could score in Johnston, Zettle and JT Larson. Cal may gain some, but it may not be much in the mile.

I’m all for CAL winning, they just don’t have enough firepower to make up what has transpired today. A couple of things are happening, Carr did not hit his taper. I feel for Cal to win they had to rely on their top end talent has well has other teams displacing Texas swimmers. None of that happened today. I mean are there other divers and swimmers in the nation not from texas or cal or did they just throw in the towel.

poor guy should get a re swim