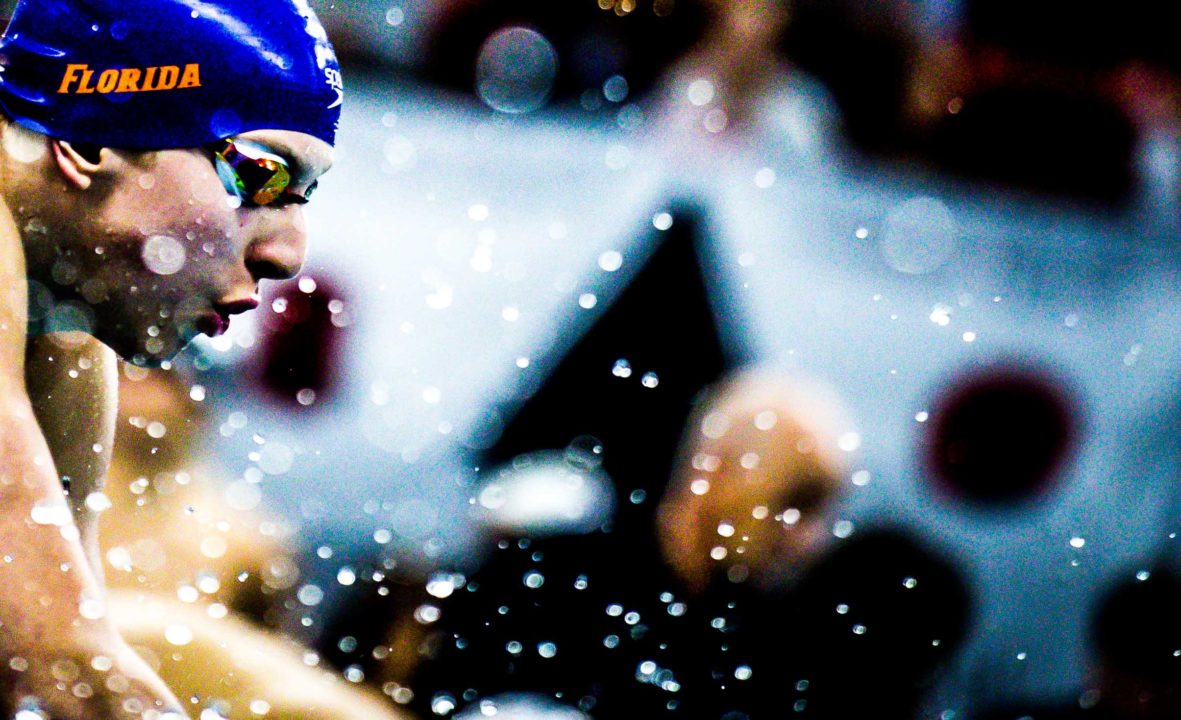 Florida's hopes of defending its title in the 800 free relay hinge on Kieran Smith, who swam one of the fastest 200s ever leading off at the 2020 SECs. Archive photo via Jack Spitser/Spitser Photography

The first of what will be an exciting four days of racing at the 2021 SEC Men’s Swimming & Diving Championships is upon us, with a pair of timed final relays on the docket Tuesday to get things going.

The University of Florida enters the meet as the eight-time defending champions, but the Gators will certainly have their hands full this week with the likes of the upstart Georgia Bulldogs and the Shaine Casas-led Texas A&M Aggies.

The Aggies are the defending champions in the 200 medley, but have graduated three quarters of that squad, while the Gators won the 800 free relay last year in a SEC Meet Record of 6:09.91. Leading off that relay last year was Kieran Smith, who unleashed the fourth-fastest 200 free in history in 1:30.11. He’ll be key this week, both in their title hopes in this relay and the overall crown.

Other storylines to keep an eye on will be the status of Florida’s distance ace Bobby Finke, who was spotted in a walking boot this week, and the South Carolina team who will be racing shorthanded.

The Florida men picked up the win in the 200 medley relay to open the meet from Heat 2 of 3, clocking 1:23.17 to take over the top time in the NCAA this season.

Last season, the Gators were third, with Friese and Davis swimming almost identical splits to today. Their last win came in 2018.

In the final heat, Alabama and Texas A&M tied for second overall in 1:23.28, with Georgia a close fourth in 1:23.62. The time for the Aggies is a new school record, eclipsing their 1:23.49 set in winning this race last season.

Shaine Casas edged out Chaney for the top backstroke split in 20.61, while Alabama freshman Matt King blasted a 18.61 anchor to erase their small deficit to the Aggies down the stretch.

The time for Casas is a new PB, going two-tenths under his 20.82 from the Art Adamson Invite in November.

Georgia entered the meet ranked #2 in the NCAA with their 1:23.60 school record from November, going just .02 slower here. Still, lead-off Javier Acevedo (21.09) and anchor Dillon Downing (18.59) were faster than they were early in the season. Downing and flier Camden Murphy (19.97) gave them the field’s fastest splits on both back-half legs.

Highlighting Tennessee’s fifth-place effort was junior Michael Houlie, who torched a 22.77 breaststroke split for the Volunteers. According to USA Swimming’s Data Hub, that ties the 10th-fastest split of all-time. Houlie split 23.32 last season. Mizzou’s Ben Patton also had a noteworthy breast leg in 23.19.

LSU topped the opening heat in a time of 1:25.61,ultimately placing eighth overall with sophomore Brooks Curry anchoring them home in 18.83.

Kieran Smith got Florida off to an incredible start in the 800 free relay, unleashing the second-fastest swim of all-time on the lead-off leg in 1:29.48. That blows by Smith’s previous best of 1:30.11 — set leading off this relay last season — which was also the SEC conference and meet record in the 200 free.

However, it was Texas A&M who prevailed with the victory in the end, ending Florida’s eight-year winning streak in the event. The Aggies’ final three swimmers slowly but surely ate into the Gator lead before Clayton Bobo overtook Miguel Cancel to win it in 6:11.63.

Oh yeah. Pretty much confirms Sec is the most exciting conference meet.
Both Smith’s and Casas’ 800 fr relay splits were exactly what I was hoping for. This gon’ be a good week.

I dunno, the Mountain West meet was bonkers.

Casas is now in the top 25 all time in six events, the most of anyone I believe.

I can’t think of anyone better than Dressel who has 5. If Dressel would have swum a few other events at SECs or NCAAs, he’d certainly have a few more.

The boy VOLS started kinda slow BUT glad Houdini Houlie pulled out a 22.77 beast-breastroke leg!!! Thought the beaver-tailed hatted guys would take his passion and momentum and perform like champs on the 800 FRR…7th? Wha hoppening???

Told ya earlier: A&M “cut” those tails off but will give them back after the last event Friday but them “tail less, beaver hatted” boys better go out & buy more of them caps because I don’t think they can glue those tails A&M cut off tonight back onto them caps & have them look decent 😄😄

seems UGA could be in a much better spot if they had better divers! 3rd & 4th on the relays and still almost in last… uh oh!

UF looks awesome, has a bunch of guys swimming really fast in both relays. Chaney going off, mainly a freestyler but just a tenth slower than Casas in the 50 back. Really solid splits from everyone else, great relay.
Smith and Finke (if he swims) look like they will break their ARs. Dazzling 1:29 from Kieran. 1:32.4 split from Freeman is a good sign too, his flat start best is a 1:33.06 from 2018 and he looks to beat that. In the 800 TAMU just had more depth. Casas went 1:31, wow he can literally swim anything.

Why didn’t florida anchor with bobby finke? They would have won handily.

previous article said that he was in a walking boot. So we assume is he somewhat injured.