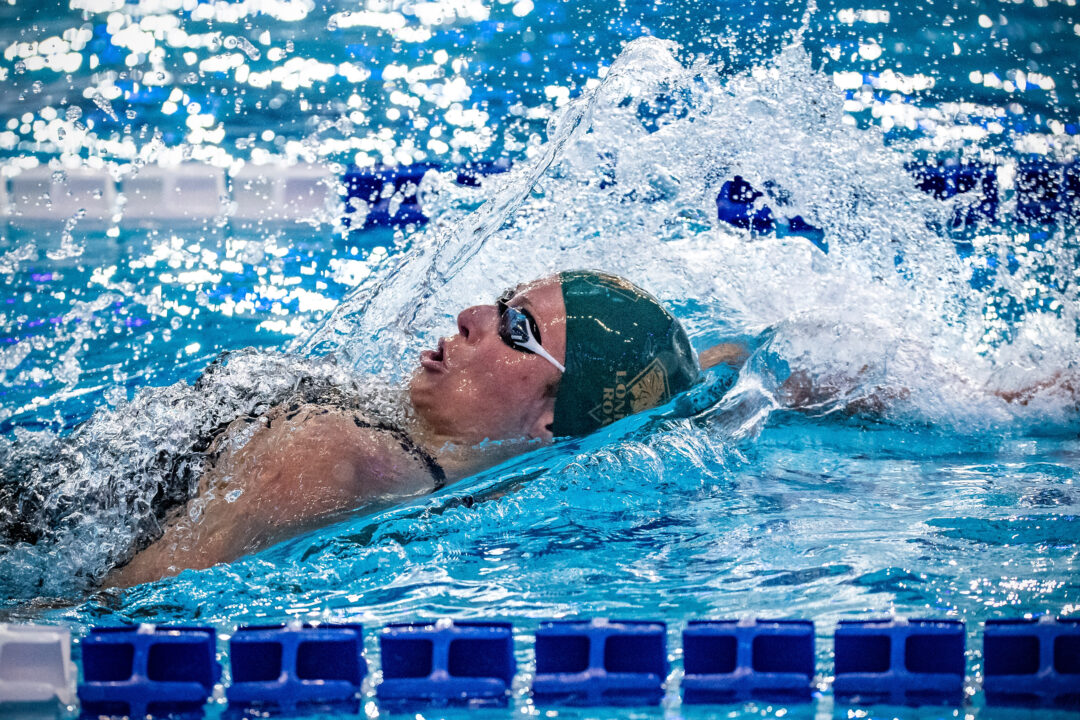 London was a perfect 4-for-4 on relays today, racking up an astonishing 132 points just off their relay performances. Stock photo via Giorgio Scala / Deepbluemedia / Insidefoto

Day 1 of Match 2 of the ISL playoffs is in the books, and boy, was it a thriller. There were plenty of storylines to follow here, so let’s start with one we were anticipating coming into the match. Today’s meet marked the debut of Ryan Murphy in this ISL season. Murphy, as expected, provided a big boost to LA Current’s roster, easily winning the men’s 200 backstroke, before going on to handle his business in the 50 back as well. There’s more positive news for LA as well, as it appears overwhelmingly likely Murphy will win the 100 back tomorrow too.

The other main storyline to follow through day 1 is that this meet is faster than the first playoff match, which took place on Thursday and Friday. Match 2 had a faster winner than Match 1 in 12 of the 20 events that were competed today. The gap between Match 2’s winning time and that of Match 1 was fairly small in many cases, however, there were some events which were significantly faster in Match 2. One such event was the men’s 4×100 free relay, which was won by Cali Condors with a 3:08.46 in Match 1, but London Roar swam a 3:05.43 to win in Match 2 today. The Condors would have actually come in 3rd in today’s relay, as LA Current swam a 3:08.03 for 2nd.

This was a pretty straight-forward one for the London Roar when things came down to it. They had the choice between breaststroke, their weakest event with no Adam Peaty or Kirill Prigoda, and butterfly, where they are also not great but at least have Vini Lanza and Dylan Carter, who have each finished as high as 3rd in a men’s 50 fly skins so far this season.
The obvious choice for everyone to eliminate was LA Current, where Ryan Murphy, even in his first match since the Tokyo Olympics, would likely dominate and Jackpot a lot of points. If the teams’ secondary goal was to limit the options of London, the team scoring leaders after day 1, then they were successful in that. There is no obvious giant Jackpot candidate in the men’s 50 fly skins, meaning that teams won’t have to worry about a massive swing at the end. Tom Shields of LA Current is the favorite after a clean three-round skins sweep in Match #8 and a win in the 100 fly on Saturday.
Women’s Skins
With Arianna Castiglioni apparently out for Aqua Centurions, London have the best sprint breaststroker remaining in this field. Alia Atkinson is the World Record holder in the event, and while she’s not on that form, she was second in the individual event. That was behind Imogen Clark of LA Current, a true speed-burner who went a lifetime best of 29.32 in the individual race.

London did have the choice of freestyle, where the Olympic champion Emma McKeon is on their roster. She was just 3rd in the individual event, and has a lot of races yet to swim. With the drop-dead short course sprinters Wasick, Weitzeil, and Kameneva lurking, that probably felt dangerous,

The women’s skins race has been breaststroke only once this season – in Match #11, the “Match of Death,” and none of these teams participated.

London Roar enters the 2nd day of the match in a favorable position, having established a 34.5-point lead following day 1. London was a perfect 4-for-4 on relays today, racking up an astonishing 132 points just off their relay performances. Additionally, Emma McKeon, Annie Lazor, Sydney Pickrem, and Kira Toussaint each provided individual wins to help their team secure the lead.

On the other side of things, Aqua Centurions enter day 2 in dire straits, sitting in 4th by a massive 93.5-point margin. It will be incredibly different for AQUA to rise out of last place in this match. While AQUA was down on their luck today, the battle between London, LA Current, and Toronto Titans is still very much alive, as the teams are only separated by 49 points halfway through the match.

This is after the regular season. We’ll try to do an update after this match:

Why the heck would Toronto not eliminate breaststroke when Clark got a 19 point jack win for LA! Hansson/Coleman would have a much better chance in fly skins to got more points than Wog/Sztandera in Breast! Are they trying to lose?

They obviously knew LA would eliminate back. Maybe they thought Roar would choose Free over Breast (Toronto was first in 50 free), but that they might choose fly over free (because Emma won the 100 fly).

Skins really messes with things because it involves getting impacted by decisions of other teams that you can’t control.

Toronto: Why eliminate fly (Hansson) instead of breast?
London: Seems that McKeon in free would be a better choice than Atkinson. McKeon might not win the first round but she’ll probably win the next two.

Will be interesting if Roar puts Chalmers in fly skins.

I agree it seems an odd choice as well. Emma will have 100 free, 50 fly and MMR before skins. Atkinson will presumably have 100 breast and MMR, so she has one less event. Although, Atkinson does kind of have less competition and is the WR holder. In saying that, there is absolutely no way skins in the final is breast so this would have been a chance for experience for the freestyle swimmers.

It wouldn’t surprise me if they stuck Kyle in for skins. He has an alright 50 free and we know he can back up swims.

Since the World Cup series Chalmers has a faster 50 fly PB than Carter and Lanza.

Oh I didn’t realise that. Yeah chuck him in then. Lanza did win skins once but then he lost in the first round in his other one…

We just need a bloody breastroker for the final. Honestly with Peaty the men’s medley, mixed medley and 50/100 breast and skins are all wide open, while at the moment Roar really has no chance in them.

Toronto’s decision to eliminate butterfly makes no sense. Breaststroke is their weakest stroke on the women’s side.

Been an interesting match. I know I keep harping on about it, but missing Peaty and Prigoda sucks. I’d even go so far as to say London missing Peaty is worse than Cali missing Dressel, because they don’t have any great backups. If Peaty was there, the men wouldn’t have been stuck choosing fly over breast, and would likely have smashed skins by a mile.

If Peaty were there breast would’ve been removed. I hope we get to see Chalmers in fly skins but maybe they’d prefer to use him on the mixed medley relay.

Currently the men only have back and free as competitive skins strokes. If we had Peaty it would be 3 and then choosing the stroke becomes way more of an advantage. Cali benefits from skins so much because they are competitive in 3 strokes for both genders. London had 3 strokes for men but that’s disappeared.

No Dressel or Peaty means the commentators have to know something about the other swimmers.
I enjoy them not being around. Less predictable and more enjoyable

Haha I get that! But Dressel is definitely coming back. I don’t think Peaty is. Peaty was London’s top scorer in last year’s final.