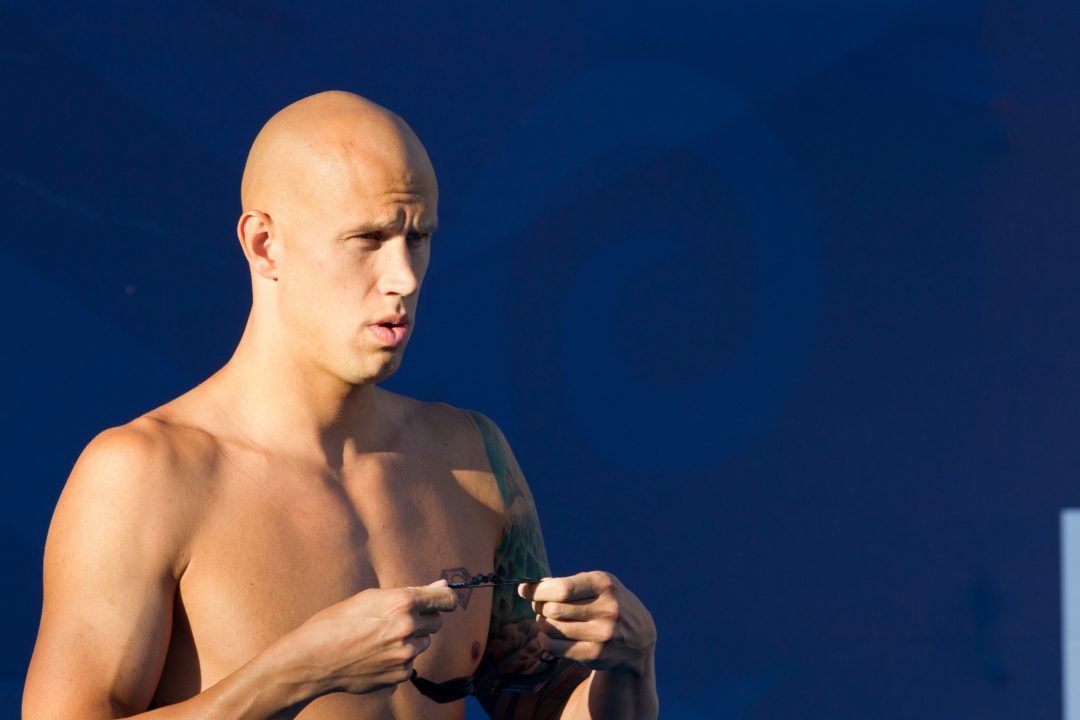 We’ve reached the mid-way point at the 2021 Canadian Olympic Trials in Toronto Canada and swimmers will take to the pool tonight in the women’s and men’s 50 freestyle and 200 IM, the men’s 1500 freestyle, and the women’s 800 freestyle.

Among those gunning for a shot at their first-ever Olympic squad will be Kayla Sanchez in the 50 free, Finlay Knox in the 200 IM, and Emma O’Croinin in the 800 free.

Olympic medalist Brent Hayden will also be in on the action, hoping to qualify for his 4th Olympic team, entering as second seed behind Josh Liendo. It will be Liendo’s chance to add a second event to his Tokyo lineup after qualifying on day 1 in the 100 fly.

Follow along live for all that and more as we get into night 3 of the 2021 Canadian Olympic Trials.

Summer McIntosh has collected her second gold medal of the meet with an 8:29.48 in the women’s 800 freestyle. The swim will get her on the Olympic roster in that event as it is well under the FINA A cut of 8:33.36. She officially qualified for the 200 freestyle last night by winning the final in a 1:56.19.

McIntosh took nearly seconds off her PB from a few weeks ago of 8:35.12 which she swam in the opening split of a 1500 freestyle. Her swim here also got her within 10 seconds of Brittany MacLean’s 2014 Canadian record of 8:20.02.

McIntosh is now the 4th fastest Canadian woman in history in this event:

Now that she has qualified to swim the event in Tokyo, McIntosh is the second 14-year-old to make her way on to the start list considering that Katie Grimes made the US Olympic team a few days ago with an 8:20.36. McIntosh’s time would have placed 7th at the US Olympic Trials.

Katrina Bellio came in with an 8:38.12 to shave a few seconds off her 8:41.77 entry time but wasn’t fast enough to crack the 8:33.36 FINA A standard meaning that she likely won’t join McIntosh in the event.

400 freestyle champion Alyson Ackman rounded out the podium with an 8:41.58 while Olivia Anderson touched with an 8:51.81 for 4th place.

4th seed in this event Eric Brown delivered a powerful performance in the 1500 freestyle and took gold with a 15:19.69. That was a major swim for Brown, shaving more than half a minute off his 15:42.53 PB in the event.

Alex Axon stayed with Brown during the front half of the race but wound up falling off a bit and hit a 15:26.16 for second place. That was also well under his own PB of 15:48.67 and allowed him to jump up from 2nd place.

Top seed going into the event Stanford Li touched with a 15:38.32 for the bronze medal which almost exactly matched his 15:38.86 PB.

Sydney Pickrem managed to pull off the win here, swimming to a 2:09.24 200 IM, and has proven that she was the correct choice to represent Canada in the event in Tokyo. Pickrem was pre-selected to race the event a few months ago based on her podium finish at the 2019 World Championships.

There, Pickrem posted a 2:08.70 in the event to collect bronze and has now delivered the #4 time in the world this year.

Coming in right after Pickrem, Kelsey Wog swam a 2:10.21 to successfully get under the 2:12.56 FINA A standard. That means that Wog will likely qualify to race the event in Tokyo, adding to her previous qualification in the 100 breast on day 2.

Bailey Andison was next and also cracked the FINA A cut with a 2:10.48 but won’t get on the team because she finished outside of the top 2. Delivering her 3rd top 5 finish so far at this meet, Mary-Sophie Harvey posted a 2:12.78 for 4th.

Finlay Knox delivered an expected victory here with a 1:58.07 to get under his former national record of 1:58.88 as well as the FINA A and Olympic-qualifying cut of 1:59.67. That makes Finlay Knox the newest likely qualifier to the 2021 Canadian Olympic team.

This will be Knox’s first-ever Olympic trip but he has represented the nation before and won a silver medal in the 200 IM at the 2019 World Junior Swimming Championships with a 1:59.44.

Following Knox, Cole Pratt swam a 2:00.49 for the silver medal and Javier Acevedo touched with a 2:00.77. While they were fast enough for a national medal, neither of those times were under the Olympic qualifying cut.

Cole Pratt has already qualified for the 2021 Olympic at this meet, taking second place in the 100 backstroke to Markus Thormeyer while Acevedo, a 2016 Olympic in the backstroke has not yet qualified for Tokyo.

Kayla Sanchez has officially done it. Sanchez swam to victory in the women’s 50 freestyle with a 24.66 to just out-swim the 24.77 FINA A standard and qualify for the Tokyo Olympics.

Sanchez has been a consistent force on the Canadian national team over the past 5 years and has raced at the 2017 World Junior Championships, 2018 Commonwealth Games, the 2019 World Championships, and will now race at the 2020 Olympics.

Sanchez was a bit faster than her own PB in the event of 24.81 which she swam in May of 2021 and was a little bit slower than the current Canadian record held by Taylor Ruck at a 24.26.

This swam marks a significant checkpoint in Sanchez’s comeback from a major shoulder injury and subsequent surgery in the fall of 2020 which kept her out of the 2020 ISL season.

The podium here was rounded out by Sarah Fournier who hit a 25.31, getting under the 25.54 she swam this morning but not quite getting the FINA A cut. Backstroker all-star Kylie Masse got close to a freestyle breakout here but wound up placing 3rd overall with a 25.49.

Brent Hayden and Josh Liendo did exactly what they needed to do here and qualified for their 4th and 1st Olympic Games, respectively. Hayden won this event with a 21.82 while Liendo swam a 21.90 meaning that they both got under the 22-second mark as well as the 22.01 FINA A.

For Hayden, this swim marks the achievement of a major goal that he has identified back in 2019, having made his official comeback to the sport after retiring for over 7 years. Hayden won a bronze medal in the 100 freestyle at the 2012 Olympic Games which came after more than a decade as a Canadian national teamer.

Hayden not only got under the FINA A standard but he also got very close to his current Canadian record which he has held for more than a decade at a 21.73 from the 2009 World Championships.

Josh Liendo will join Brent Hayden on the 2020 Canadian Olympic team in the men’s 50 freestyle after hitting a 21.90 which is under the 22.01 FINA A. Liendo’s best time before this race was actually also a 22.01, having hit that time during the prelims.

This will be Liendo’s first Olympic squad but he’s represented Canada before, having collected silver in the 100 freestyle at the 2019 World Juniors with a 49.17.

May want to edit this article, lots of errors/missing times

Montana Champagne has to be the best name in swimming.

The article only says that Hayden was close to his NR – what was the time?

Could point out more but I think you get the idea. This article needs to be heavily edited.

In all fairness to the third pt, Byron McDonald incorrectly said on air Chris Brown’s previous PB is 15:56 or sth similar and after that kept saying “more than 30 seconds”

Getting Brent on the team is most important for his leadership. Only 1 other man on the team made it in 2016, andas a relay only swimmer. The others so far are all teenagers

So there’s a swimmer named Stanford who according to his bio goes to Columbia.. his parents must have been disappointed lol

a 37yr old and a 18yr old Canadian duo going sub-22 in Canada….. man…. I’m liking the direction of Canadian swimming these past few years!

Just wish there were a few more veterans with that kind of talent on the Canadian side – most of the big talent is 16-22.

there were only 2 teenagers in that final so Canada has some veterans still around.