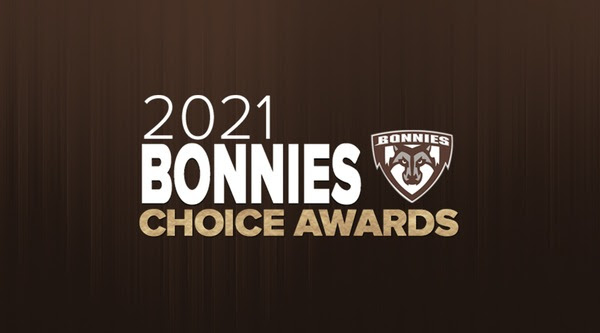 The 2021 Bonnies Choice Awards were held Monday, May 17 in a virtual setting for the second consecutive year. Current photo via St. Bonaventure Athletics

The 2021 Bonnies Choice Awards were held Monday, May 17 in a virtual setting for the second consecutive year. Despite not being able to get together inside the Reilly Center, St. Bonaventure Athletics Department honored its student-athletes and their work over the past year through the GoBonniesTV YouTube channel.

As in recent years, the Bonnies Choice portion of the awards was comprised of awards that were nominated by the St. Bonaventure Student-Athlete Advisory Committee and coaches and voted on by all Bonnies student-athletes through an online vote.

The Ray Dee Leadership Award is named for the 1964 Bona’s graduate who was the Chair of the University’s Board of Trustees, as well as a generous donor to our athletic programs. Sadly, Mr. Dee passed away this past January – and we remember him and his family through this award named in his honor.

The Ray Dee Leadership award is presented to the senior who, through his or her leadership skills, sets a positive example for others to follow and builds pride for St. Bonaventure Athletics.  The person will have maintained the highest standards of performance, integrity, sportsmanship and respect.

This year’s winner was a member of the softball team who appeared in 56 games over her career.  She graduated in only three years with a degree in Health Sciences and received the general excellence award in the health science curriculum. She was a member of the Student-Athlete Advisory Committee, a PAC volunteer and co-host of the “Be The Change” podcast.  She was a leader on her team, especially this year with a very young roster.  A Dean’s List student every semester, she will attend D’Youville College next fall to pursue a doctorate degree in chiropractic. She also plans to coach softball.

The winner of the Ray Dee Leadership Award is Abby Borkowski.

The Service Award is presented annually to a graduating senior for outstanding service, dedication and commitment to the Department of Athletics. It may go to either a student-athlete or to a non-athlete. This award is dedicated to the memory of assistant sports information director Brian Moretti who passed away unexpectedly on March 5, 2014.  Brian was only here for a short time, but he left an unforgettable impression through his work ethic, enthusiasm and love of his craft, in particular the work he did with the women’s basketball team. It was a privilege to know Brian and his family and we are thrilled to present this in his name.

This year’s winner is a junior who has served the athletics department in a myriad of roles, all in a volunteer basis, and is always ready to lend a hand wherever it is needed.  He was the manager of the men’s lacrosse team in its first year, 2019, then has moved on to work in the Compliance Office under Ryan Clingan. He assisted with home game management for a number of sports the past two years.

The winner of the Brian Moretti Service Award is Jack Steger.

The Merit Award is presented every year to one senior male and one senior female student-athlete for outstanding academic achievement, significant athletic achievement and meaningful contribution to the St. Bonaventure community.

Our women’s Merit Award recipient was a model student-athlete.  On the soccer field, she anchored the Bonnies’ defense for four years, earning 56 starts out of 63 games. She was the team captain during this shortened spring season, leading a very young team.  In the classroom, she earned a degree in Health Science with a minor in biology, graduating with honors and a GPA over 3.8.  She has tutored peer students, been a volunteer at the Warming House and for Special Olympics and worked as an EMT during the summer.

The winner of the Female Merit Award is Alex Thompson.

From his freshman year to 2021, he has been a regular on the mound for the baseball team, holding down relief and starting roles equally well.  In 2017, he set the program record for appearances on the mound with 28 and was selected to the A-10 All-Rookie Team.  He backed that up with a strong sophomore year, as his ERA of 2.58 ranks eighth best in the Bona record books.  He now stands in the top 10 pitchers in school history in saves, ERA and appearances.  Off the field, he has been a regular around the halls of the Reilly Center, serving as an intern in the athletics communications office and this year as the graduate assistant for academic support services. He was nominated for the 2021 NCAA Emerging Leaders Seminar and will complete his degree in journalism with a sports and business administration minor.

The winner of the Male Merit Award is Donovan Moffat.

The Letterwinner Award is presented every year to one senior male and one senior female student-athlete who have assembled outstanding records of athletic accomplishments over their careers and have proven instrumental to their teams’ success.

Our women’s recipient has led the lacrosse team as a team captain and one of the Bonnies’ top offensive players. The Rochester native ranks 19th all-time in program history in scoring with 56 goals and 34 assists for 90 points.  Over her career, she played in 62 games and started 54 times. She led the Bonnies in scoring three consecutive seasons, and her 10 points in a single game is tied for the school record. This year as a redshirt senior she earned Academic All-Conference honors while completing her Master’s degree in business administration. She has participated in the NCAA’s Emerging Leadership Seminar and Career in Sports Forum. In June she will begin a full-time position in St. Bonaventure’s athletics compliance office.

The winner of the Female Letterwinner Award is Destinee Johnson.

This year, we have co-winners of the men’s Letterwinner Award.

Our first recipient is a testament to perseverance and improvement.  This diver started out from a B qualifier at A-10s his freshman year, moved up to an A qualifier his sophomore year and finished just shy of the medal stand. The 2020 season went even better as he qualified for the NCAA Zone Championships. He was on track to medal and the A-10 meet until suffering an injury during the 1 meter board finals. This past winter he was at his career best, peaking at the A-10 Championship meet, finishing fourth on the 1 meter board, just five points out of first place, and then winning the 3 meter dive the following day. He was named the Atlantic 10 Men’s Diver of the Year, the first Bonnies diver since 2016 to earn that honor.

The first winner of the Male Letterwinner Award is Michael Bruno.

Our second recipient has set multiple program records for the baseball team, proving since his freshman season what a talented player he is. He stands fourth all-time in home runs with 25. Last season, he was the national leader in home runs with seven in just seven games. This year, he leads the Bonnies in every offensive category including hits, home runs, doubles and runs batted in, and stands second in the Atlantic 10 Conference in slugging percentage.

The second winner of the Male Letterwinner Award is Tyler Kelder.