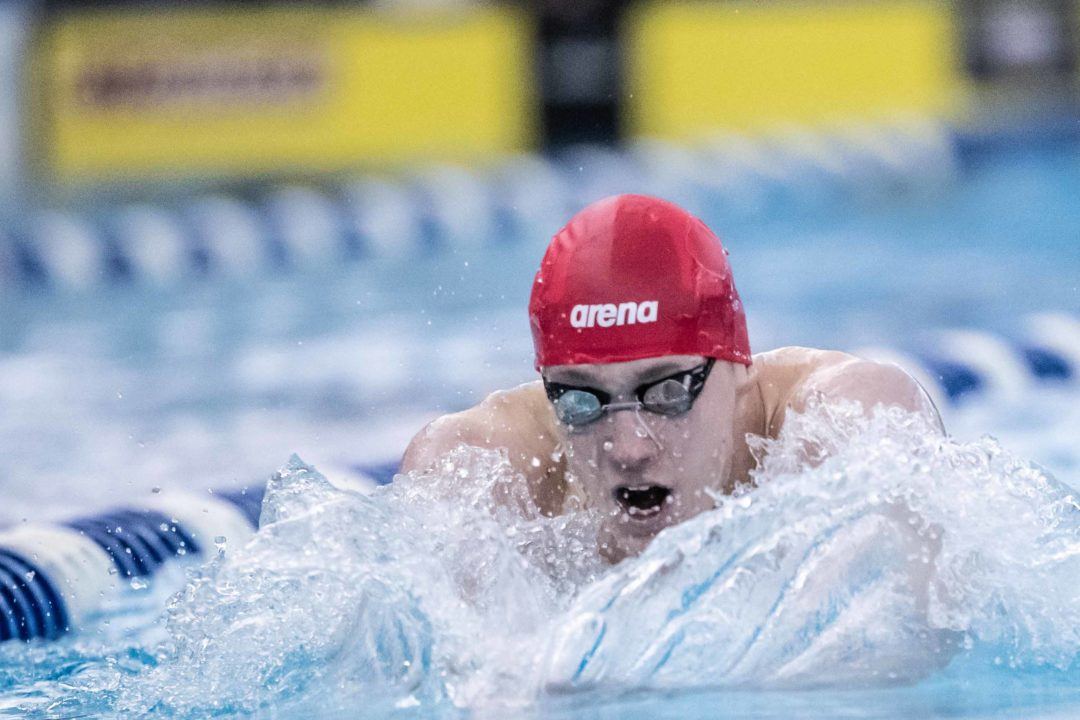 Zane Backes (above) is racing in tonight's 200 breast A-final for IU, as the Hoosiers are gunning for a B1G title in an extremely close race with Michigan. Archive photo via Mike Lewis/Ola Vista Photography

The Big Ten Conference Championships wrap up tonight, and it’s going to be an electric finish. Indiana leads Michigan by 26.5 points and Ohio State by 36.5 points, while the Wolverines and Hoosiers project to score roughly the same amount of points in tonight’s finals, 1650 free included.

Michigan is projected to win by one point.

Watch closely, as this could come down to a single-digit margin at the end, much like it did when Louisville claimed their first-ever ACC crown last week by two points over NC State. Swimmers moving up from the bottom of a final, or falling flat after holding a top seed in a final, will make all the difference.

The race for fourth is also going to be tight, as Purdue leads Wisconsin and Northwestern, but the Badgers and Wildcats have three milers apiece to the Boilermakers’ one. NU has 1/2/5 in the A/B/C finals tonight (not including the mile), Purdue 1/2/3 and Wisconsin 0/3/2, with Purdue 61.5 points head of NU and 44.5 ahead of Wisconsin.

NU is projected to move up to fourth, ahead of Purdue by a half-point and ahead of Wisconsin by only nine.

The team race is tight and the energy at Ohio State’s natatorium tonight is rowdy. For the conference crown, Ohio State’s Sem Andreis just beat out Nikola Acin of Purdue at the wall, 42.23 to 42.31. Andreis adds to his hardware collection, as he won the 50 free on night two.

The Buckeyes had two podium finishers here, as Hunter Armstrong clocked a 42.37 for third, while Michigan’s Gus Borges tied for fourth with IU freshman Tomer Frankel and teammate River Wright, all three of them going 42.50.

The B-final went to Wisconsin freshman Andrew Benson (42.93), a new lifetime best for him. In the C-final, Michigan freshman Bence Szabados got up and raced out of lane one for the win at 43.39, ahead of Northwestern senior Robert Cecil (43.67) as both went lifetime bests.

Michigan now owns a 30-point lead over Indiana, while the Hoosiers are ahead of OSU by 27. The Wolverines had a massive push here to move past IU, scoring over 100 points.

Brinegar didn’t let up, cruising to the Big Ten title with a 14:38.26, four seconds ahead of Mitchell’s 14:42.60. Brinegar was over ten seconds off of his best, but the time is still good for #6 in the nation this year. Mitchell dropped over 15 seconds from his old best, and he’s now #8 in the nation.

Another freshman, Ohio State’s Charlie Clark, dropped huge time, going from 15:07.84 in high school to a podium-placing time of 14:45.24. Clark is now the first Buckeye swimmer under 14:50 in this event, smashing the OSU record by over five seconds.

In fourth, Wisconsin’s Josh Dannhauser snagged key points for the Badgers in their team race for fourth, as he was 14:46.76.

Out of the early heats, Michigan’s Will Roberts pinned down a 14:59.87 to lead the way going into the last heat swimming with finals. He led a 1-2 with teammate Danny Berlitz (15:03.97) among early heats, and they were fast enough to place fifth and seventh, respectively, after the final heat swam.

In a tight race that came down to the finish in heat four, Northwestern senior Jeffrey Durmer hustled over the last 150, splitting 26.9, 26.6 and finally 25.0 to run down Minnesota freshman Christopher Nagy at the wall. Durmer was 15:06.96, a hundredth ahead of Nagy. Durmer dropped almost nine seconds off of his old best from 2019, while Nagy destroyed his old best of 15:32.74. Durmer finished eighth in the final results.

Michigan is clinging to a 50-point lead, as Indiana is just 19 ahead of OSU with the mile finished. Purdue still holds fourth, but they had zero scorers in the event, so Wisconsin and NU pull nearer.

In the B-final, Colin McDermott of Ohio State posted a big 1:41.81 for the win, using a strong underwater off of the final turn to nab the top time of the heat.

Michigan is still ahead by 41 points, while the Hoosiers look to be clear of the Buckeyes, ahead of OSU by 49. Down in the race for fourth, Wisconsin how now pulled dead-even with Purdue, with Northwestern back 25 of each of them.

Zane Backes of Indiana went out like a rocket, pushing the pace with an absurd 24.38 first 50. Backes was 52.67 at the 100, still ahead, but Minnesota’s Max McHugh and Ohio State’s Paul Delakis pulled up, McHugh about even with him.

McHugh and Delakis passed him through the final turn, and McHugh added to his 100 breast gold with a 1:50.93, rattling Ian Finnerty’s meet record. McHugh moves to #2 in the nation, and Delakis’s 1:51.78 is good for fifth in the country.

Heading into the final relay, Michigan is locked in for the title as long as they don’t DQ, while Indiana is safe in second if they just finish the relay legally.

Wisconsin is now in fourth, holding a nine-point lead over Purdue, while Northwestern is just four points behind Purdue. The Boilermakers should have the strongest 400 free relay, but they’ll need to do about five places better than Wisconsin to reclaim fourth.

Now, the race is for eighth; Minnesota just passed Iowa for eighth position going into the relay, but they are ahead by only 1.5 points.

Ohio State, Indiana and Purdue met in the 400 free relay final heat, as Purdue needed to finish five places ahead of Wisconsin to reclaim fourth.

Purdue was third in the final heat, going 2:50.32, and they were able to beat Wisconsin and take back fourth-place, as the Badgers finished ninth. Nikola Acin was 41.78 on the third leg for the Boilermakers, while Nick Sherman led off in 42.88 and Trent Pellini (42.77) and Ryan Lawrence (42.89) also split 42s. The Boilers posted a big school record with their effort tonight.

Minnesota won heat one in 2:54.37, but Iowa was faster in the heat after, going 2:53.98. Iowa scores four more points than Minnesota there, as Northwestern finished between them, so Iowa takes back eighth place at their last Big Ten Championships as a program.

In Michigan State’s last swim as a program, Aidan Farley led off their relay in 42.93, which sets a Michigan State record. He previously held it at 43.54 from the 100 free B-final.

RIP Michigan State. Farley with the middle finger to the AD with that team record. Too bad his career there is cut short!

Zack Apple – brining back the chest hair and facial hair.

We need more chest hair in our sport too many of men shave their chest even when it’s not shave down time.

Totally put this in the wrong thread 🤦‍♂️🤦‍♂️

No this is patrick

another swimswam favorite goes down! anyone check on Guerra?

Congrats to Michigan! It was a great Big 10 meet this year. I’m really proud of the Indiana Hoosiers. They put out a fantastic effort and the future is extremely bright in Bloomington! Can’t wait until next year. Not only are we gonna win, but I’ll be there in person to soak it all in!

And River leads off in a time that would have won the individual 100 tonight – redemption!

I told you that boy sem Andreis is different!! The stallion!