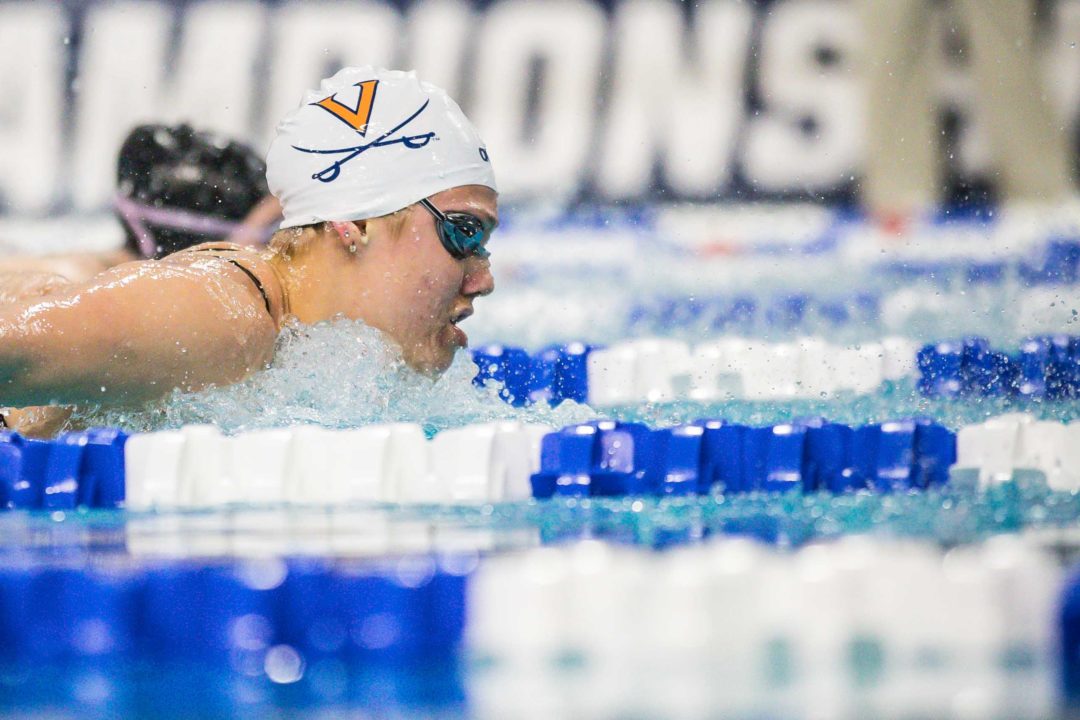 The UVA Cavaliers should build on their 27.5 lead after putting 12 women into tonight's A-finals, including four in the 100 fly. Current photo via Jack Spitser/Spitser Photography

UVA appears to be in the driver’s seat after a strong morning that saw the Cavaliers put 12 swimmers into A-finals. The team most likely to challenge them for the title, NC State, earned seven A-final swims, as did the Louisville Cardinals.

Four of UVA’s A-finalists will appear in the first event of the evening, the 100 fly, where Kate Douglass holds the top seed after putting down what appeared to be a fairly casual 50.90 this morning. She’ll square off against a field that includes last year’s champion, UVA senior Morgan Hill, who’ll be right next to Douglass after going 51.45 this morning.

Last year, NC State swept the top four spots in the 400 IM, and the top three swimmers are all back in tonight’s A-final. Defending champion Kathleen Moore will be in lane three, while top-seeded Ella Nelson, a UVA freshman, will be in lane four after going 4:06.62 in prelims.

Mallory Comerford, one of the fastest women ever in the 200 free and last year’s winner, is now done with college swimming, but the two women who placed 2nd and 3rd here last year, UVA’s Paige Madden and Megan Moroney, return. Madden won the 500 free yesterday, while Moroney put up the fastest time this morning with a 1:44.87, just ahead of Louisville’s Arina Openysheva (1:44.93).

The 100 breast looks like it should be a battle between a pair of sophomores. UVA’s Alexis Wenger went 58.17 for the top seed this morning, but defending champion Sophie Hansson of NC State will be right next to her.

The 100 back is the only event that will not feature a defending champion, but last year’s 2nd and 3rd place finishers, UVA’s Megan Moroney and Notre Dame’s Carly Quast, will both be in the A-final. NC State freshman Katharine Berkoff had the fastest time in this morning’s prelims with a 51.21 and will be in lane four tonight.

The final event of the session will be the 400 medley relay. UVA has the fastest time in the conference this season by nearly three seconds, but NC State returns three of the four legs that won this relay a year ago.

University of Virginia freshman Kate Douglass picked up her 2nd individual win, and 4th victory overall, to kick off day 3. Her time of 50.83 is about half-a-second shy of her mid-season 50.30 that remains her lifetime best.

A 1-2-5-6 finish for Virginia, plus a B-final win from Caroline Gmelich, led to a 129-point event for Virginia, who entered the day with a lead over NC State. The Wolfpack, meanwhile, didn’t score any points in the race, which just-about seals this meet for the Cavaliers, barring disaster over the last 3 sessions of the meet.

The defending champion Morgan Hill of Virginia took 2nd in 51.12, about a tenth slower than she went last year, while Louisville’s Grace Oglesby also slid a spot, from 2nd at last year’s meet to 3rd this season.

None of the 8 A-finalists swam a best time in the evening session.

This race was a great example of how fun a 400 IM can be to watch, as the leaders changed from stroke to stroke. UVA junior Abby Richter was the early leader after going out in 55.01 on the fly leg, but defending champion Kate Moore moved just 0.08s ahead of Richter on the backstroke leg. UVA freshman Ella Nelson surged ahead after splitting 33.92/34.55 on breast. She continued to hold the lead after the first 50 of freestyle, but Moore charged home, out splitting Nelson 27.48 to 28.63 on the last 50, en route to winning by the narrowest of margins, 4:04.35 to 4:04.36.

Moore remains the only woman in NC State history to win an ACC title in this race. NC State has been part of ACC women’s swimming since it started in 1979.

All eight women in the A-final improved on their time from this morning.

Virginia junior Paige Madden took her second individual title of the meet with a 1:43.18 victory here tonight. Madden let teammate Kyla Vallstake the lead early, but Madden split 52.17 on the back half to win by over a second. That’s her 2nd-fastest time ever, with her PR of 1:43.03 coming from last year’s NCAA Championships.

It was a tight three-way battle behind Madden. Louisville junior Arina Openysheva continues to have a strong meet; she couldn’t quite match her personal best time of 1:43.91 she set leading off Louisville’s 800 free relay Wednesday night, but her mark of 1:44.24 was good for 2nd here.

UVA racked up the points here with a 3rd place finish from Megan Moroney (1:44.26), repeating her finish from last year, while Valls had enough left in the tank to take 4th in 1:44.28, shaving a few tenths off her personal best of 1:44.54, also set Wednesday night.

In a battle of speedy sophomores, Alexis Wenger was just ahead at the halfway points, going out in 27.19 to Sophie Hansson‘s 27.33, but Hansson was just able to come back and get Wenger at the touch, winning 57.74 to 57.91. Hansson tied her winning time from last year, which also stands as the ACC and meet record.

Wenger came into the meet with a best time of 58.31 from last year’s ACCs, lowered her PR to 58.17 this morning, and then dipped under 58 for the first time tonight.

With a total of five finalists in this event compared to Virginia’s one, NC State has closed the gap some, with Virginia now leading 853.5-736. Meanwhile, with three women in the A-final, Louisville has moved within striking distance of NC State, sitting at 686.5 points.

NC State freshman Katharine Berkoff earned her first individual ACC title with a 51.64 tonight. That was a bit off her 51.21 from this morning, but still enough to beat Virginia junior Caroline Gmelich, who took 2nd with a 51.88. Gmelich had a solid evening, taking 9th in the 100 fly with a new personal best time of 52.46 before tying her personal best in this event

With men’s diving wrapped up, it looks like the final diving scores shouldn’t have a huge impact on most of the team battles next week, with most of the top schools relatively close to each other currently.

Berkoff got NC State off to a fast start, swimming three-tenths faster than she individually, and staking NC State to nearly a one second lead immediately.Hansson extended the Wolfpack’s lead with a 57.9 breast split, putting the matter essentially out of reach. Alons essentially matched 100 fly champion Douglass on the fly leg, 50.34 to 50.29. Hill did her best to close the gap, anchoring in 46.82, but Ky-lee Perry‘s 47.63 was more than enough, as NC State won in 3:27.22, setting a new meet record.

With one day of action remaining, UVA has a 113.5 point lead over NC State. While that’s definitely not insurmountable, it does put the Cavaliers in the driver’s seat. Louisville looks to be pretty well locked into 3rd at this point, while UNC and Notre Dame will be swimming for 4th tomorrow. Duke and Florida State should be vying for 6th, and four teams sit between 224 and 297 points, meaning that 8th-11th places could see some shakeups.

I need for someone to explain, ” How can Pittsburgh Totally Destroy Ohio State a few weeks ago” and be in next to last place at this meet? At the Western Pennsylvania College Invite, no team was close. I thought Chuck’s Panthers were ready.

Four is NCState’s good luck number. Winning the 400 IM, the 400 Medley relay and winning a total of 4 events this session.

Clearly my joke was lost in the digital realm…

And down 113 with all that luck

It would be really helpful if ACC Conference Meet hosts could figure out how to load event results on to the live results page
Also would be helpful if when they do actually post final results they posted scored results
Anyone know end of day 3 scores?
TIA

And move them to Atlanta. Enough of Greensoboro.

Use this link. Live results and scores are here http://sidearmstats.com/acc/swimming/index.htm

ACC live coverage still needs to improve, as was the case last year. Announcer keeps referring to Miami swimmers when he means FSU. Graphics flash up top 3 not all 8 times at end of race. GAC facility needs camera mounts that give a clear view of lane 1. Intent of live feed is to see the entire field and not zoom in on one swimmer only. Pool level start camera view does not give view of all 8. Quality of coverage does not facilitate an age group coach using this coverage very well as a teaching tool for kids due to constrained shots of field. ACC needs a feedback loop for viewers to help them with ideas to improve… Read more »

Announcers are terrible. Constantly getting swimmers and teams confused, often miss when a swimmer outside lanes 3-4-5 is leading; Color commentators don’t seem to do much of any homework in advance to become knowledgeable about swimmers other than maybe the top 1-2; ESPN/ACC net work seem to believe that merely hiring a former Olympian makes for a good commentator; they would do far better to hire someone knowledgeable about swimming who would put in the time to do some homework about the swimmers and teams. Most of the commentators on these comment threads would do a better job.

Biesel was a great commentator last year. She did her homework and knew the events and somewhat knew the conference. They need to find a knowledgeable former swimmer/coach with experience in the ACC to do it.

That 100 breast did not disappoint

Where are UVA’s weaknesses?

To be fair, they do lack a lot of distance swimmers. Paige Madden can swim the 1650 free, but apart from her, it’s only the freshman Donohoe. NCSU has way more milers, AFAIK. It’s interesting because UVA used to be known for its distance, and NCSU for its sprinting, but now they’re more balanced.

but do they have 1650 swimmers

So, NC State has MORE, but UVA has a few good ones as well.

No. Rosters are limited to less than 30 swimmers 😉