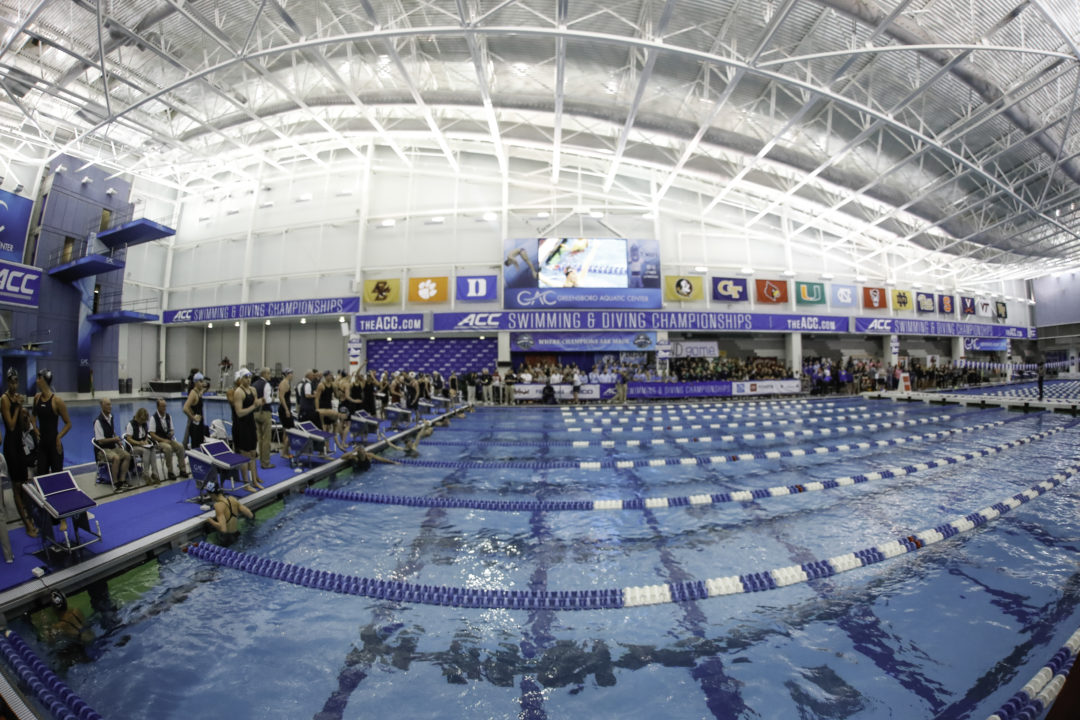 Notre Dame Junior Zach Yeadon is the top seed in the 500 free. Notre Dame and NC State swimmers occupy the middle four lanes tonight, with defending champion Eric Knowles of NC State swimming in lane six. Likewise, 200 IM defending champion Caio Pumputis of Georgia Tech will be in lane six of that event, while Louisville’s Evgenii Somov is in lane four after going 1:43.48 this morning.

The sprint freestyles have been increasingly competitive in this conference, and both the 50 free and the 200 free relay should be fun tonight. NC State’s Nyls Korstanje will be in swimming lane four against a field that includes Pitt speedster Blaise Vera and two men who had sub-19 relay anchors last night in Louisville’s Mihalis Deliyiannis and Virginia Tech’s Tommy Hallock (the former drew a DQ for an early start, but would’ve been well under 19 even with a very safe start).

The 200 free relay figures to be a three-way race between defending champions Florida State, who are still dangerous despite graduating 3/4 of that relay, traditional powerhouse NC State, and Louisville, who put three men into the 50 free A-final today.

Notre Dame junior Zach Yeadon is bouncing back after a shaky postseason last year. Tonight he knocked two off his lifetime best — which came from the 2018 ACC Champs — to win by well a second, touching in a 4:10.39 that moves him to #2 in the nation at the moment, behind only newly-minted US Open Record holder Kieran Smith.

A pair of freshmen rounded out the top three spots. Virginia’s Jack Walker didn’t overwhelm on last night’s 4×200 free relay, but tonight he swam a 4:11.93, over three seconds faster than his previous lifetime best from over a year ago.

Notre Dame’s Jack Hoagland also swam a lifetime best, touching in 4:12.15. Hoagland has been improving all season — he came out of high school with a best time of 4:23.21. Teammate Sadler McKeen finished 6th in 4:17.14.

Last year it took a 4:16.0 to qualify for NCAAs in this event, so the top five should all have their NCAA tickets punched if they hadn’t yet.

Colton Paulson of Louisville won the B-final for the second straight year, touching in 4:16.75.

Five men looked it be in it coming off of the final wall, and sure enough, the top five men in this race all touched within 0.16s of each, an unusually tight margin for a 200.

Virginia senior Ted Schubert got his hand on the wall first, touching in 1:43.09 for a new lifetime best by four-tenths of a second. Schubert was actually in the lead at the halfway point after a 25.25 backstroke leg, then fell behind on the breast leg, before storming home with a 24.80 free leg.

Defending champion Caio Pumputis of Georgia Tech was just behind at 1:43.13. Last year Pumputis won in 1:41.28, but it looks like he might be a little more focused on NCAAs or the upcoming Brazilian Olympic Trials. NC State’s Erge Gezmis took 3rd in 1:43.19; Gezmis has now shaved five seconds off his lifetime best in this event today.

Louisville teammates Evgenii Somov (who had the fastest time this morning) and Daniel Sos took 4th and 5th in 1:43.24 and 1:43.27. All of the top five should be well under the NCAA qualifying time in this event; it took 1:43.82 last year.

Here’s how team scores seem to look currently (with all diving points included):

Florida State had six men in the finals of the 50 free. The one with the slowest time in the individual 50 free tonight proved to be the relay hero.

From the get go, we expected this to be a battle between NC State, Louisville, and Florida State, and a 19.19 leadoff leg by Korstanje put the Wolfpack in the lead early. A 19.09 2nd leg by Andrej Barna moved Louisville into the lead, and they held that as the anchor legs dove in. Max McCusker, who finished 21st individually tonight with a 19.75, dove in and split 18.93, running down Louisville’s anchor Tanner Cummings to give FSU its 2nd-straight victory in this event, touching in 1:16.69 to Louisville’s 1:16.94.

Notably, Louisville came within a whisker of drawing a relay disqualification for the second straight night row, as Cummings’ reaction time was -0.01s, considered to be within the margin of error and therefore not drawing an automatic DQ, but cutting it close.

NC State seemed to be focusing on safe relay starts and ended up 3rd in 1:17.70. Virginia Tech, meanwhile, actually put up the 4th-fastest time of the night while swimming in the initial heat, also slipping under the NCAA ‘B’ cut with a 1:17.84. Tommy Hallock split under 19 for the second straight tonight, swimming the 2nd leg in 18.83.

Boston College DQ’d due to an early takeoff by the anchor leg. Miami scoring 197 diving points already meant that BC was unlikely to pass them in the team totals, given that they were only likely to score a handful of individual points, but a relay DQ would seem to end whatever hope they had.

Scores Through Day 2 (Including All Diving Points)

At the end of our first full day of swimming, the tiers are starting to look about how we expected. NC State has a solid lead, with Virginia and Florida State not too far behind. Louisville would be in 2nd with the 64 points they lost from last night’s relay DQ. Notre Dame started with fewer diving points than any other team vying for a spot in the top half, but stands a good chance of continuing to move up in the standings the next few days.

Anybody know if there’s video for that 200 IM final? Would love to see that very tight finish. Thx.

Thank you, what a finish! Pretty good job with the filming too, whoever did that. Looks like it was from the one row in the front of the walkway, unobstructed view, and pretty steady on the camera.

Great job Pittsburgh Coaches, we are climbing the ladder, only 20 points behind a team that only has Divers entered.

Augustus Lamb from UVA was 20.5 out of high school and was 19.4 tonight flat and 19.0 on 2 relays. Impressive development that will continue in Charlottesville.

Word on the street. UNC swimming VERY well for who they have. Gangloff was a good choice