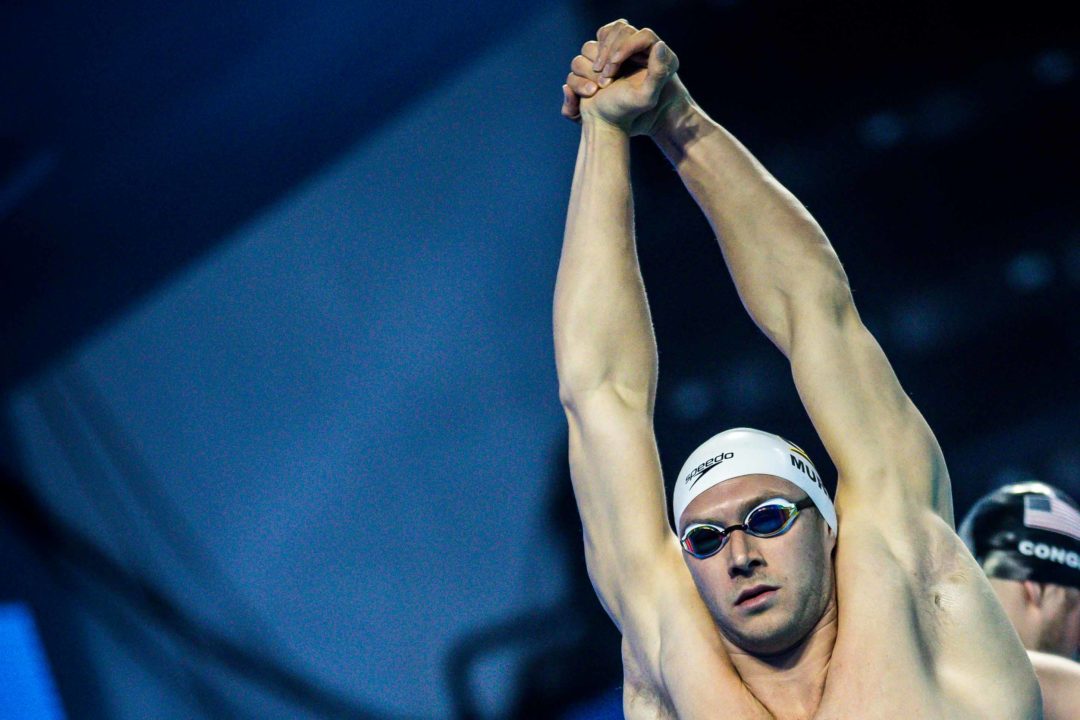 Ryan Murphy beat Xu Jiayu in 2016. Xu won in 2017. Murphy had the fastest time in 2018. Xu leads the world so far this season. Archive photo via Jack Spitser/Spitser Photography

2017 was a bit of a blip in WR-holder Ryan Murphy‘s career. After setting the WR in Rio and winning gold in the 100 back, Murphy faltered in 2017: his time in the final of 52.59 good for only bronze. But it was back to gold in 2018, as he was 51-high once again to claim the Pan Pac title last summer. He’s broken 52 seconds thrice, ever, and is the favorite going into Worlds as the fastest swimmer of 2018.

Over the last few years, China’s Xu Jiayu has posed a threat to Murphy, and he’s the only other active swimmer who has broken 52 seconds (Xu was 51.86 at 2017 Chinese Nationals). Xu is, after all, the defending World champion in this event. This year, he leads the way with a very quick 52.27 from Chinese Nationals. An on-form Xu and an on-form Murphy has fireworks potential, and it looks like we’re getting both.

In 2017, only Xu, Matt Grevers, and Murphy broke 53 seconds. It’s looking like the party will be raging primarily in the 52-second range (or better) this year.

This season, four men have been under 53 already. After Xu is Australian Mitch Larkin at 52.38, Russian Evgeny Rylov at 52.81 and then Murphy at 52.99. Larkin has had quite a year already, and while his most impressive swim this season is arguably the world-leading 1:55.72 he went in the 200 IM, he looks to be in great shape in general. His 52.38 was his fastest performance since 2015, and anyone with potential for a 52-low (his best is a 52.11) will have a chance at gold.

Rylov, meanwhile, is the strongest Russian presence this year, what with 50 back WR-holder and teen phenom Kliment Kolesnikov dropping the 200 back from his agenda as he battles shoulder injury. A healthy Kolesnikov would be a sleeper pick for a surprise win here, as his best is 52.53 from last summer but he’s shown with his 50 back WR that he is extremely talented. But with his form unclear, Rylov is the one to watch. Last summer, Rylov set the European Record in the 200 back (1:53.36) and took silver behind Kolesnikov in the 100. He’s been 52.81 this year, less than two tenths from his best, ranking him third in the world.

If Kolesnikov pulls out of the meet altogether (or just the 100), Russia is still bringing Grigoriy Tarasevich to fill his vacant 200 back spot. Tarasevich is no slouch in the 100, either — Tarasevich just missed the Olympic final in 2016, placed 5th in the event in 2017, and probably would’ve won a medal at the 2018 European Champs if Kolesnikov and Rylov hadn’t beat him in prelims (only two per country move to semifinals and so on). For what it’s worth, Tarasevich currently sits at #8 in the world with his 53.29.

Grevers and Japan’s Ryosuke Irie are the veterans of the field. Grevers, who missed the 2016 Olympic team but bounced back to make 2017 Worlds (where he’d take the silver in the 100 back), 2018 Pan Pacs, and 2019 Worlds, has been a fixture for Team USA since the 2008 Olympics. More than a decade later, he’s still a very real podium threat, and he’s been 53.09 this season. Last year, Grevers was just off the podium at 52.99 at Pan Pacs. Larkin had edged him for bronze, while Irie swooped in for silver behind Murphy. Irie sits at World #7 this year, just behind Grevers with a 53.25, and Irie was 4th in 2017. Both men are incredibly talented and have consistently found a way to stay relevant this deep into their careers.

On the other end of the age spectrum, Romania’s Robert Glinta and Daniel Christian Martin have been 53-mids and rank in the top 15 this season. Glinta placed 4th in this event at Euros last summer, while Martin raced to silver in both the 100 and 200 back at the 2018 Youth Olympics. Teen phenom Thomas Ceccon won bronze at the Youth Olympics, and his 53.60 from Italian Nationals in April makes him the highest-ranked Italian this season.

Dark horse: Markus Thormeyer (Canada). Canada’s momentum as a swimming nation has largely rested on their women’s shoulders, but Thormeyer quietly continues to progress. This year, his 53.35 from Canadian Trials actually ranks him #9 in the world, and he took bronze at the 2018 Commonwealth Games. His time this year also set a new Canadian record.

Murphy definitely got this one. I’m thinking 51.70. Larkin, Xu, and Grevers could probably be 52.2 or better for the other medals

agreed – this is Murphy’s race to loose – he is just so damn good at it – and the only guy who went twice under 52 within 2 years time period .

The Cal swimmer to win it in WR.