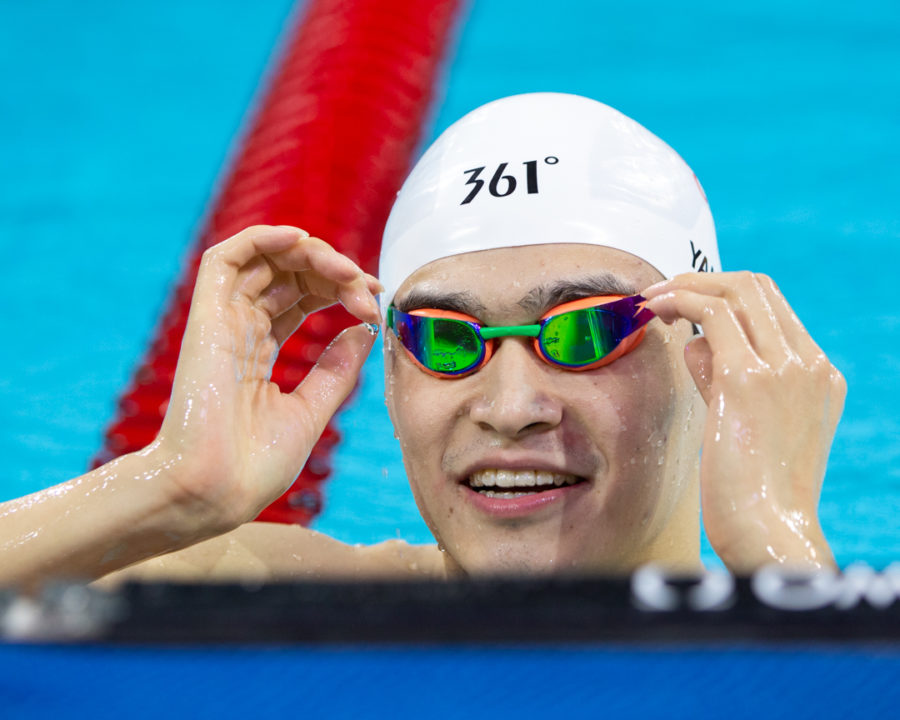 China's Sun Yang could win the first swimming medal at the 2019 FINA World Aquatics Championships after posting the top qualifying time of 3:44.10 in heats. Archive photo via “Rafael/Domeyko Photography”

Each and every swimmer who qualified for a semi-final or final race on Day 1 at 2019 FINA World Championships is expected to be behind his or her block on Sunday evening in Gwangju. There were no scratches as of 2:30 PM local time.

China’s Sun Yang and USA’s Katie Ledecky are top seeds in the respective 400 freestyle races. Sun posted a 3:44.10 in heats to take pole position in tonight’s final. On either side of him will be Lithuania’s Danas Rapsys (3:44.31 in heats) and Jack McLoughlin (3:44.79). Ledecky (4:01.84 in heats) will be challenged by Australian teenager Ariarne Titmus (4:02.42 in heats), the only other competitor who has been under 4:00 so far this season.

Caeleb Dressel of the United States and Andrii Govorov were the top qualifiers in the semi-finals of the men’s 50 fly. They both went 22.84 to win their heats and were the only sub-23s of the morning. World record-holder Sarah Sjostrom led the field through to semis in the women’s 100 fly with 56.45. Australia’s Emma McKeon also broke 57 seconds, posting the second-fastest time of 56.90.

World record-holder Adam Peaty of Great Britain went 57.59 in heats, missing his championship record by .12. While he was the only sub-58 breaststoker of the morning, all 16 semi-finalists did break a minute, and two were under 59 seconds: Japan’s Yasuhiro Koseki (58.91) and Ilya Shymanovich of Belarus (58.87).

When will they have to submit relay lineups for the finals??

Also women’s free relay is after the men’s relay? Interesting switch up