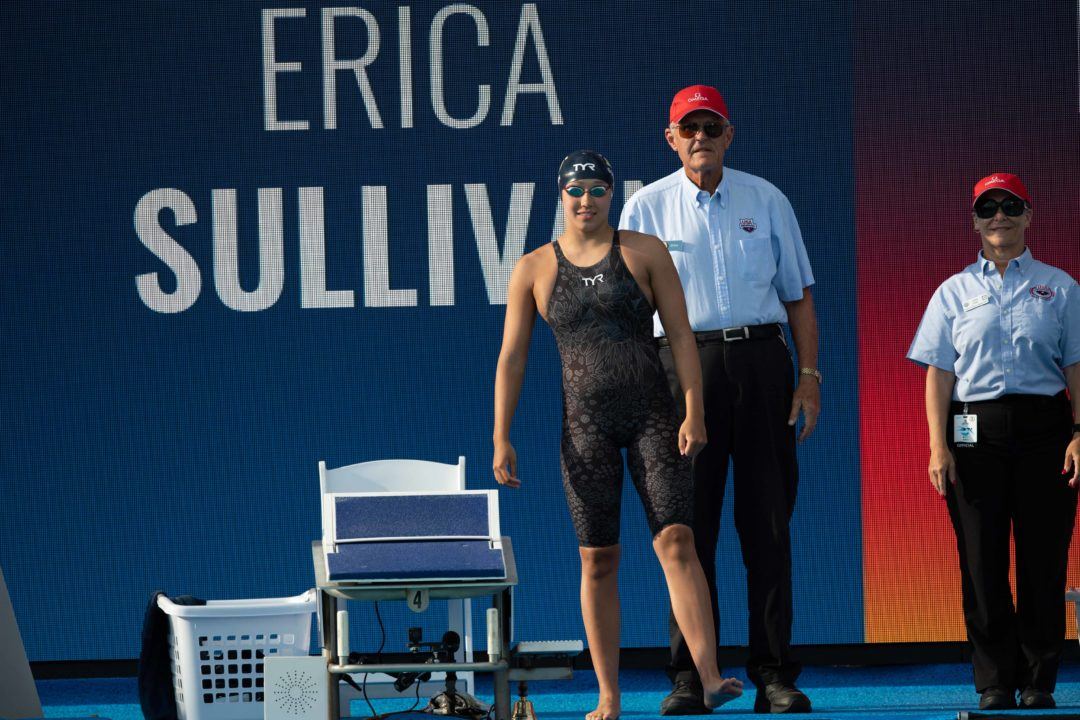 Erica Sullivan from the Sandpipers of Nevada is the top seed for the women in the 800 free. Archive photo via Mike Lewis/Ola Vista Photography

The first session of the 2019 Pro Swim Series will kick off tonight in Knoxville, Tennessee. This is the first time Knoxville will be hosting a Pro Swim Series meet. Tonight is distance only, featuring the 800 free for women and men.

We won’t get a chance to see Katie Ledecky tonight in one of her best events, but she’ll be racing the rest of the week. Erica Sullivan from the Sandpipers of Nevada is the top seed for the women, as Leah Smith of Tuscon Ford Aquatics, who was initially on the psych sheets, isn’t on the heat sheets for tonight. Young talent Mariah Denigan of the Northern KY Clippers and seasoned open water star Ashley Twichell are two others to watch for the women.

For the men, two former NCAA standouts will go head-to-head. Former South Carolina Gamecock Akaram Mahmoud, who is from Egypt, is the top seed, followed closely by Anton Ipsen. Ipsen swam at NC State and is a Danish-born swimmer.

Ashley Twichell of TAC Titans shot out to the lead and didn’t look back, claiming the quickest time out of the first heat. The 2017 World Champion in the 5K open water race maintained a comfortable lead after the start of the race, and clocked a time of 8:32.27 for the win.

University of Tennessee sophomore Amanda Nunan was 8:45.19 for 5th in heat 1, with Magnolia Aquatic Club’s Kaitlynn Sims, a Michigan commit, taking 6th in 8:49.23.

Anton Ipsen of Wolfpack Elite completely ran away with it, finishing almost half a pool length ahead of the next-best swimmer. Ipsen hit the wall at 8:00.34, just short of breaking eight minutes. Canadian Jeremy Bagshaw of HPC – Victoria and Egypt’s Akaram Mahmoud battled for 2nd, with Bagshaw claiming runner-up honors at 8:12.81.

Heat 2 saw Tennessee’s Taylor Abbott claw his way onto the podium, however, as he swam in an outside lane and raced to a time of 8:09.54, nearly three seconds ahead of what Bagshaw went in the first heat to take 2nd there.

3:06pm pst anyone know where the Live Stream for the women’s 800mm is? The page with the TV schedule does NOT have live stream link or does it?

It sure does. Usaswimming.org. It’s just right there on the home page.